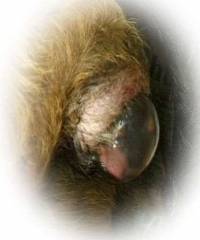 This section shows a normal delivery of a litter of pups with both pictures and text. It also shows different presentations but explains when to call for help. But if everything goes well, the bitch is in familiar surroundings and is handled by people she loves and respects, a normal delivery of all pups in a litter can be a wonderful experience for everybody concerned. This page explains a 'normal delivery'.

Some bitches 'nest' by tearing up newspaper or otherwise make a nest in her bed for up to 2 days. Others they simply begin to strain with very few other signs. Some also pant and shiver at the same time because of the drop in her body temperature, despite having the room warm.

Most bitches strain for about half an hour or so and then you know the eminent birth is not too far away. While a bitch is straining, her tail is bent backwards in the typical position as shown.

Note that if the bitch strains and strains and no pups appear for a period of not exceeding two hours, some human intervention by an experienced breeder or veterinarian is immediately needed.

Usually but not always, the sac with the first pup encased becomes visible. Some bitches seem to just pop the first pup out. But with others it may take several strong pushes or strains. However, this strong straining should be allowed to continue for more than half an hour before the first pup is produced without seeking human intervention by an experienced breeder or veterinarian.

Usually, but not always the head appears first. However, if the back end, the back feet or some different presentations should occur, as long as the bitch is not distressed or the pup does not appear to be stuck, there is no need to intervene.

Sometimes if you can grasp the pup gently but firmly with a rough towel as demonstrated on our DVD How to Raise a Litter of Puppies that is all the assistance required. If assistance is necessary, it is important that you guide the pup down between the bitch's back legs, rather than straight away from her body. If the afterbirth is still attached, then cut the umbilical cord with a pair of sterilized scissors leaving at least a couple of inches of cord for the bitch to seal off. If she is not interested, squeeze the cord between your fingers or tie it off with cotton.

The pup is born encased in a sac

If the bitch is still not interested in cleaning up the puppy, you must then do that. If the pup has not begun to breathe, rub it with a rough towel, and present the bitch with the clean pup. While it is most important to get the pup breathing as soon as possible, it is also important just to assist and not make the bitch feel you are taking charge of her litter.

Pups can take up to ten minutes to breathe properly, so there is no need to 'panic'. The bitch's stimulation of the pup by licking it is far better than you can do with a towel. However, as the body temperature of a newborn pup drops rapidly, it is most important to keep the pup warm while it is being cleaned and dried.

This excellent mother has the instinct to clean up the pup herself, beginning at the face. If this is the case, best leave her alone. She is doing a great job!

This same bitch cleaning up the body. Note the afterbirth is still attached. Usually she is so interested in the pup, she does not mind its removal. 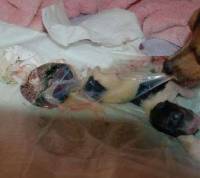 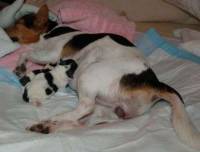 Most bitches will produce additional pups without disturbing the ones already born. If there is a large litter, it may be necessary to place some of the first born pups separately in a warm basket with a hot water bottle or heating pad beneath them for the short period when the bitch is restless because another pup is coming.

However, with a small litter like this one, this is not necessary as you can see the bitch and her last born pup are quite comfortable and happy.

Whether you remove some of the pups at any time during the whelping or not, it is most important that the pups are kept warm as their body temperature drops dramatically during the first few minutes after birth.

The first presentation is a breech birth with the hind feet appearing first.

The second presentation is where a front foot is appearing beside the head. Sometimes this sort of presentation creates pain for the bitch and it is necessary to assist. If you do so, it is most important that the pup is encouraged to move towards the front of the bitch - that is between her back legs and forward rather than away from her body. 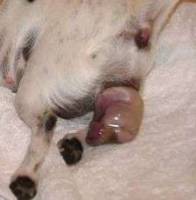 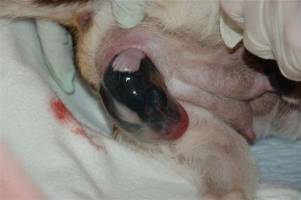 Foot appearing alongside the head.

When to call the Veterinarian

A veterinarian must be consulted immediately if the bitch:

Whether a veterinarian is required during the actual births or not, it is important that the bitch and her pups are presented to a veterinarian as soon as you believe the whelping is concluded. This is to make certain there are no retained pups or afterbirths.

The raising of a litter of puppies from 3 days before the bitch is due to whelp up until the point of sale is clearly demonstrated on our DVD 'How to Raise a Litter of Puppies'.