Other Terriers Developed outside Great Britain 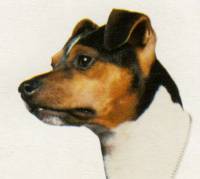 Today, the influence of the small ratting Terriers of Britain is seen in several countries. North America has the Rat Terrier in 2 sizes and the Hairless Terrier, Japan has its Japanese Terrier and South America has its Brazilian Terrier. These have become recognised as pure breeds by our ANKC 'sister' bodies, the AKC and FCI , but developed independently from their ratting counterparts in each of these different parts of the world. 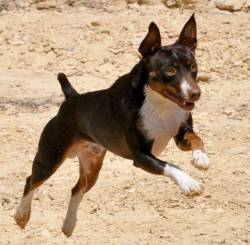 History: A recent breed, the American Rat Terrier's recognition by the AKC was effective from 2010. But their history probably began before the 1800's when they were first brought to America by British settlers in a similar way previously described in 'Terriers that sailed the World'.

Originally called 'Feists' because they were feisty, they captured the attention of the American public in the 1970's when President Theodore Roosevelt, who adored his Terrier called 'Skip', coined the name 'Rat Terrier' because they were originally bred for ratting and farm work[1]. 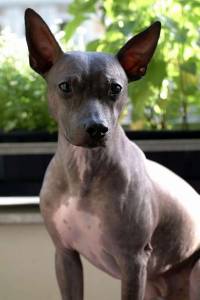 Coat: American Hairless Terrier pups are born with a birth coat that falls out when they are several weeks old. But like other hairless breeds, they come in coated and hairless varieties. But unlike other hairless breeds they have with normal dentition.  The coated variety must have a short, smooth, dense coat, while the hairless variety should have a skin that is smooth and warm to touch. 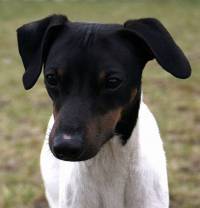 History: Known only in Japan since the 1700's the Japanese Terrier was brought to Japan on sailing ships, probably from the Netherlands. Planned breeding began around 1920 and the type was fixed by 1930. 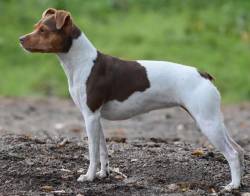 History: The 2 FCI recognised Brazilian breeds are the Brazilian Terrier and the Brazilan Mastiff, the Filo Brazilero. They worked together in the large open spaces of the coffee plantations. As watch dogs it was the terrier's job to raise the alarm and the Mastiff's job to handle the situation. The Brazilian Terrier was also an exceptionally good ratter.

Although the head is wedge shaped, it has a pronounced stop with a medial frontal groove running up the skull which is unusual for a terrier. This allows the dog's large round eyes to look straight ahead.