The famous Greek philosopher Aristotle (384 - 322BC), stated that if you cross the sleek hound of Southern Mediterranean with the broad mouthed mountain dog of Eurasia, you will procure pups which have the grace of the hound and the courage of the mountain dog. As millennia slipped by, Aristotle's advice became reality with the sport of hunting becoming popular with the European nobility.These people's wealth and passion influenced the selective breeding for distinct specialized hunting types of dogs.

Coursing Develops as a Sport 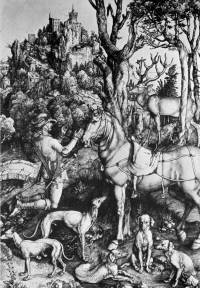 Louis IX (1214 - 1270 AD) introduced Gazehounds into Europe after he had hunted with them in the Holy Land. These were then known as Sight Hounds. As more millennia rolled by, the nobility enjoyed observing the speed of their dogs when chasing hare. This 'coursing' arguably founded the first canine sports.

Packs of different types of hounds, became popular throughout Europe but especially in France. By the 14th Century hunting, especially with Greyhounds had become respected amongst the European gentry. These hunts often went on for days. The 'Livre de Salle' a manual written by the Great Hunter of Inglostadt in Bavaria in 1418 gives a complete list of convents, abbeys or religious domiciles which, between specified dates were under obligation to receive and meet all expenses of entertainment and food. Typically the Duke's hunt would consist of 3 huntsmen of the nobility, 10 grooms men and/or servants, 5 horses and 45 dogs.[2]

By the time of the French Revolution, 76 different types of hounds were described in France alone, each belonging to a particular area or estate.

Based on this, the Sport of Coursing in Australia developed quite differently. At first a wallaby was used as the lure. Then hare, rabbits and foxes were introduced into our virgin countryside purely for use in this sport.

In 1570, Dr. Johannes Caius called the Sight Hound that pursues prey by eye Gazehounds in his classification that was written in Latin and translated into English by A Fleming in 1576[1]. The original translation of this important work is in my opinion too difficult to read to be printed in its original form. So it appears here as my interpretation in modern English:

This kind of dog pursues by eye, but not by using the nose to smell, excels using only its excellent sight. It hunts fox and hare by separating these from amongst a great flock or herd. It follows by eyesight when this is clear, constant, and not uncertain. If a fox or hare has been wounded, or if it returns to intermingle with the flock or herd, this dog finds it, leaving the rest of the cattle untouched. After he has seen it, he separates it from the flock or herd and never ceases until he has wearied the fox or hare to death. Our countrymen call this dog a Gaze Hound because his gaze or the beams of his sight are so steadfastly settled and immovably fastened.

These dogs usually occupy the Northern parts of England more than the Southern parts, and open fields rather than bushy and woody places. Horsemen use them more than hunters on foot, because they might provoke their horses to a swift gallop wherewith they are more delighted than with the prey itself and that they might accustom their horse to leap over hedges and ditches, without stop or stumble, without harm or hazard, without doubt or danger, and so escape with safeguard of life.

But if the riders feel they may harm themselves or their horses by swift pursuit being made upon the prey, they may prevent such perilous tempest by calling off the chase, or else by swift pursuit might overtake the dog and the prey and slaughter the prey themselves. If at any time the dog goes the wrong way, the master makes some sign or token to the dog which returns to the master. Then the chase begins again, and with a clear voice and a swift foot the dog follows the game with as much courage and nimbleness as he did at the beginning.

[1] Dr John Caius, "Of Englishe Dogges: The Diuersities, the Names, the Natures, and the Properties", London, 1576, translated into English by Abraham Fleming, Pages 13-14. The work was originally published in Latin in 1570 as "Johannes Caius, De Canibus Britannicis"