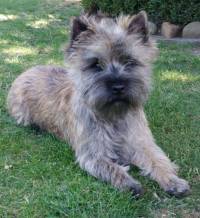 The Cairn Terrier is a small, alert terrier that is easy to train. Devoted to his family, whether elderly, children or energetic teenagers he reliably adapts to modern society. In Britain, the Cairn's initial establishment as a pure breed took 36 years! These small rough coated terriers were named after after the cairns of Isle of Skye where these terriers were bred to hunt the otters that called the cairns their home.

History of the Cairn Terrier 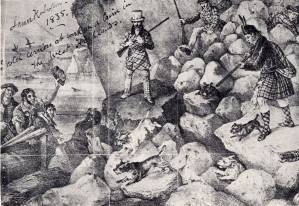 James Robertson in his 'Sketches of Scottish Terriers' or 'diehards' as he called them, reproduced this lithograph from an old engraving dated 1835, 50 years before the advent of dog shows.

This signed, dated drawing is titled: 'Scotch terriers at work on a cairn in the West Highlands'. It shows rough sailors with primitive guns, arriving at the rocky cliffs. One is waving his cap, while others in kilts scramble down the broken rocks, following their terriers, as the otters they hunt slip between the rocks. In this pack of remarkably similar terriers that the artist called 'Scotch' Terriers, resemble Cairn Terriers in type. This picture clearly demonstrates the fallen rocks which formed on the seashore providing a vantage point from which the terriers could watch the otters. When an otter retreated between the rocks to its hiding space, the terrier could face the otter on equal terms[1].

Different types of 'Scotch' terriers working in packs, were kept on the 'Lairds' or large estates throughout Scotland. Every laird had its pack of Terriers and its house dog. Originally called 'short-haired Skye', our current Cairns can be traced back to the 'Waternish' pack of the MacDonalds. Waternish is one of six peninsulas which comprise the Isle of Skye.  Captain MacDonald always selected a smart, plucky dog to be bred with, regardless of his appearance. With his rise in popularity, the Cairn Terrier has taken his rightful place as the founder of many of the terrier breeds of Scotland, such as the Scottish Terrier and the West Highland White. Meanwhile, Mr MacDonalds of 'Waternish' on the Isle of Skye that had the greatest influence on our modern Cairn and later our Australian Terrier[4]. 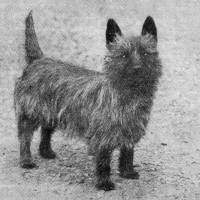 By 1888, the Skye, Scottish and West Highland Terrier were all recognised as pure breeds with their own published breed standards. But it would be another 24 years, until 1912[2], before the Cairn was given its own register. Then it was yet another decade, 1922 before the Breed Standard was adopted by the Cairn Terrier Club of England[5]. Coupled with this, until 1924, interbreeding was permitted between these 3 different terriers of Scotland. This occurred occasionally between the Scottish Terrier and the Cairn, but more often between the West Highland White Terrier and the Cairn.

So, for 36 years, from 1888 until 1924, because there were no clear distinctions between the Cairn and the other Scotch Terrier breeds, the Cairn Terrier was not stabilised. What a credit to their breeders that the Cairns were able to retain their 'workmanlike' appearance during all this time! 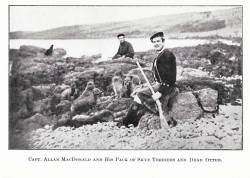 Captain MacDonald and his Terriers

History of Cairn Terriers in Australia

In 1848, a pack of 'Rough Terriers', the fore runners of what we know today as the Cairn Terrier, was brought to Tasmania from the Isle of Skye by Scotsman Captain Allan MacDonald of the 99th Regiment[4]. In 1862, when Australia's first dog show was held in Tasmania, some 'Rough Terriers' as they were first called, were entered. Two years later, in 1864 at Australia's second dog show in Melbourne, 23 Rough Terriers (over 7 lbs) were recorded. It is probable that these were descendants of Captain MacDonald's terriers he brought from the Isle of Skye. 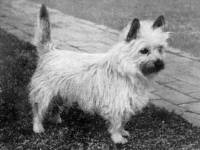 With no formal pedigree systems in place in Australia, and the Cairn not being stabilised in Britain until 1924, it was remarkable that 1926 saw the foundation for Cairns in Victoria by Miss Patterson who brought in 'Boy of Holshaw' from UK , Mrs Cormack and Miss Coles with Miss Skene (Rubislaw) following in 1928.

In 1930 Major Eric Mayhead brought Cairns into Tasmania. From those he sold to Miss Dorothy Chandler, she bred a pup and sold him to Mr James Watson (Durnsford). He became 'Grand Champion Sandy of Stafford'. Mr James Watson was very successful with Cairns in both Tasmania and Victoria. Then his son Richard then carried on where his father left off and is still involved today. 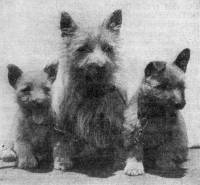 Among the prominent Victorian breeders that emerged in 1932, Mrs Light, (Strathdene) and Miss Russell (Kerriemuir) made significant contributions[3]. At the same time, Miss Grice (Rahween) began with an English import Blencartha Blossum. Over many decades, she steered Cairn Terriers in Australia through the Second World War. Miss Grice was then responsible for the formation of the Cairn Terrier Club of Victoria which was still in existence.

The Cairn Terrier should be workmanlike because his prey lived in cairns in the Highlands of Scotland. So, what makes the Cairn Terrier unique is that the Breed Standard allows his front feet to turn out just a little, but only from the dog's pastern. This was so he could balance himself while scrambling up the rocks or cairns of Scotland that were so much part of his ancestry[3]. In other words the feet should NOT turn out because of bowed forelegs caused by the chest extending below the elbows. Instead, the Cairn is built on top of his legs.

Today the Breed Standard also demands the Cairn Terrier to be medium in every way - in leg, bone, body length, depth and width as well as in movement. But at the same time he must be strong, muscular, and workmanlike to enable his supple body to work between narrow crevices. If the dog had to retreat quickly, the Cairn's head should be small enough to facilitate this exit so the dog did not get stuck between the rocks, yet broad enough to support its strong jaw. His workmanlike appearance is enhanced by his rough coat which should be presented naturally and without excessive trimming[1]. 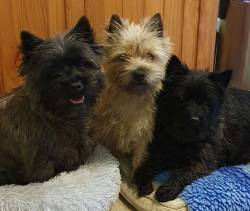 The Cairn Terrier comes in a variety of colours, including brindles. Interestingly, a potentially dark Cairn can look wheaten as a youngster, but can gradually darken throughout its life as the triad of pictures of the same dog on the left, illustrates. As well as in the accompanying collage, this is evident in the case of 'Jock', the subject of the story of A Dog of Many Roles.[2] in which the pictures also show this change of colour throughout his life. This story also demonstrates the adaptability and charm one of This delightful breed.

Comparison between the Cairn and West Highland White Terriers

Because of their historical connection, it is interesting to compare the Cairn and West Highland White Terriers. Not only are there many distinct similarities, the differences between these two breeds demonstrate the purpose for which these two breeds were originally bred.