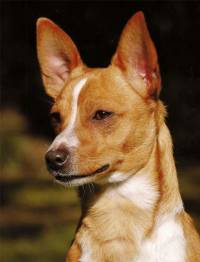 A relative newcomer to Australia, the Portuguese Podengo or Portuguese Warren Hound, is an ancient breed and Portugal's 'National Dog'. This primitive breed hunts not only with sight and scent, but also with its extraordinarily keen sense of hearing. It comes in six varieties. Each of the three sizes - large, medium and small come with both smooth and wire coat types. These 6 separate varieties hunted in different terrains within the local areas across Portugal.

History of the Portuguese Podengo

Thousands of years ago, the Podengo was developed from Pariah or primitive dogs. These looked somewhat like today's Canaan Dogs, probably brought from Africa to Portugal by sea-faring Phoenicians. Before Portugal had any significant population, these dogs assisted early settlers to hunt indigenous animals to stay alive. This subsistence consisted of food to eat plus skins to provide primitive clothing and shelter.

From 1,000 - 1,100 A.D, dogs that hunted rabbits became so legendary they were portrayed on friezes (carved images) of buildings and in other artworks in Portugal[1]. These depict pricked eared dogs with a hare or rabbit their mouths. Hence the evolution of the natural, primitive, utilitarian character of today's Podengos and why they were also known as Portuguese Warren Dogs[1a].

The Podengo (Medium) were rabbit hunters. They were first exhibited in the 1940's. By the 1960's there was a consolidation of yellow as the dominant colour with the disappearance of black which had plagued dogs in some villages. Today, the Podengo (Large) and the Podengo (Medium) are allowed to be interbred. 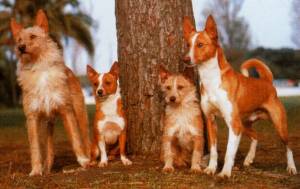 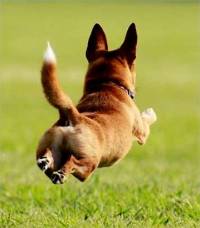 Today the Podengo (Small) is also used to catch rats, mice and other vermin. But his claim to fame was as a rabbit hunter when he worked side-by-side with the Podengo (Medium). The Podengo (Small) worked close to the hunter on foot, sounding his voice when he found the entrance to a rabbit warren, especially when it was hidden within the crevices of tiny rock ledges. This attracted hunters to the rabbits' warrens but unlike Terriers, the Podengo did not usually enter these dens. If the dog had a white tipped tail, it could be distinguished easily from from its quarry in long grass and brush. Podengos (Small) are capable of great bursts of speed which enables them to catch rabbits on the run[2]. Once the rabbit is on flatter ground, the Podengo (Medium) continues the chase. 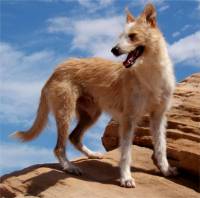 Podengos have been exhibited in Portugal since their first Canine Exhibitions in 1902. At first all 6 varieties were classified as the same breed. Then several cynologists and veterinarians worked on the classification into 3 sizes and 2 coat types with the Breed Standard approved by the Portuguese Kennel Club in 1954. This was published in the 'Portuguese Origins Book' in 1956. Today they are still classified into these 3 sizes and 2 coat types[1b]. They were recognized by the FCI in 2008 and Australia in 2011.

A primitive type dog, The Portuguese Podengo comes 3 sizes and 2 coat types, namely short and smooth or long and wire. Both coat types are without undercoat. They also come in three sizes: 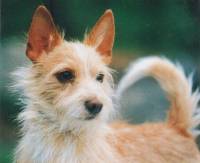 The head is wedge-shaped, with flat skull, prominent occiput and clean cheeks. The stop is not defined but the muzzle with its straight profile, is shorter in length than the skull. The lips are tight fitting, thin and firm, horizontally cut and well pigmented. The nose, which is prominent at the tip, should be a darker colour than the coat. The eyes are small and slanted, their colour ranging from honey to brown, corresponding with the coat colour. The triangular shaped, thin, erect ears are vertical and fairly long and very mobile. They are set level with the eyes but tilt slightly forward. The mouth closes in a normal scissors bite with full dentition  required in the large variety. 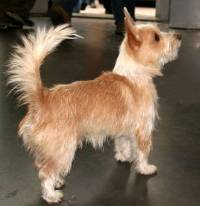 The long neck is in proportion to the head and the body, without dewlap. The shoulder blade is long, and well laid back with the upper arm completing good angulation in the front so the elbows are parallel to the main line of the body. The forearms are straight and the feet should be round with strong, short nails. The Podengo (Small) should have similar front construction to other short legged breeds. In other words although the legs and pasterns are short, they should also be strong and flexible. 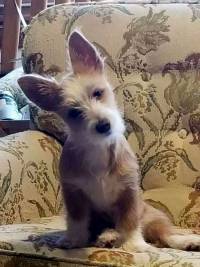 The withers are only slightly visible but the topline is straight and level ending in a well-muscled loin with a slight slope in the croup allowing the sickle-shaped tail to be set on fairly high. The chest is of moderate width but should reach the elbows, with the ribs slightly sprung. The sternum rises back and up, so the underline is slightly tucked up. The skin of the body should be thin and tight and preferably darker pigmented than the coat. 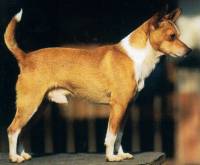 The hindquarters should be well muscled and lean, with long, medium width well muscled first and second thighs. This enables the dog to have a good turn of stifle and have light and easy movement. The short hock should be straight, without rear dewclaws.

He comes in yellow and fawn in all shades from light to dark, with or without white markings or patches with a white tipped tail desirable. But in the Podengo (Small), black or brown instead of fawn is accepted but not preferred.