The West Highland White Terrier was originally developed to hunt underground creatures like foxes and otter that lived in the rocky Highlands of Scotland. So he had to be not only courageous, but also he had to have the physique to wriggle though passages between narrow rocky entrances, and retreat backwards! 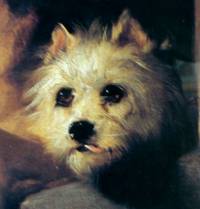 With light coloured terriers being a favoured colour so they could be seen when in motion, for centuries 'earth dogges' or terriers emerged in Argyllshire on the west coast of Scotland. In the early 1600's when James the First of England and the sixth of Scotland sent half a dozen to France, he requested they travel in two or more ships in case any were harmed on the way[1]. Small white terriers like the one on the left, also featured in several paintings by Sir Edwin Landseer and others during the 1800's.

Colonel Malcolm of Poltalloch is considered the 'father of the breed'. He worked these small terriers in Argyllshire for over 60 years, from around 1830 - 1905. That is why they were first known as Poltalloch Terriers.

The Colonel trained his dogs by coupling a young one to an older one as seen on the right, a proven  technique developed from a principle often used with Scent Hounds. The Colonel believed that the terrier must have the pluck and capacity to get at the quarry. Also, his body must be so small and active, that he could reach the innermost recesses of the lair. Unlike their English counterpart where the lair is in soft earth, a Scottish lair is usually between, over or under rocks so big that no man could get to them, let alone move them. 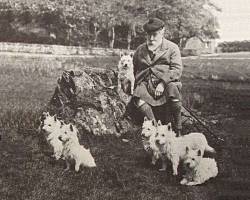 Colonel Malcolm with his Westies

" If your dogs ribs are a trifle too big, he may crush one or two through the narrow slit in the rocks and then stick. He will never be able to pull himself back - at least until starvation has so reduced him that be will probably be able, if set free to get back into the open" [1a]. 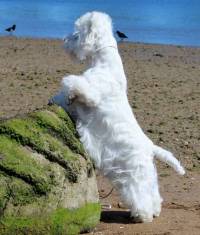 Based on the above, it was also believed that that terriers' feet should turn out a little from the pastern so the terrier could scramble up rocks better than those perfectly straight Fox-terrier-like feet. In addition, it was also considered that white terriers were easier to see when in motion. So, huntsmen bred for a straight limb, a rather low, active body, and a broad forehead with a short rough face. They also selected an outer coat long enough to thatch over the soft, woolly undercoat coat to keep the terrier dry so a good shake would throw off most of the water. It was also considered that the size of the terrier was best indicated by its weight, the dog being no more than 18 pounds and the bitch, 16 pounds[1a].

By 1887, as the dog world emerged and after various suggestions, the name 'West Highland White' was adopted[5]. 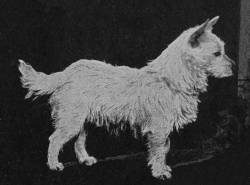 In 1869 the first two West Highland White Terriers were imported into Melbourne. These were named "Daisy" and 'Piccaninny" in Tyzack's Annual which also states these dogs were from original stock from the Isle of Skye[2]. They were kept pure in the Mackinnon family for 60 years prior to classification being given to them so, when they were first shown in Melbourne, they were called Scottish Terriers. But from 1908 to 1911, two more were imported by Mrs Chirnside and another seven were listed in Tyzacks Annual as West Highland White Terriers. But the credit of establishing the Westie in Australia must be given to Mrs Audrey Chirnside[3] who brought in a breeding pair in 1910 - Noasgamh of Ostaig and Soraidh of Ostaig which established the Ostaig lines here. 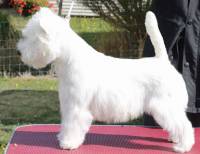 Until 1927, West Highland White Terriers were exhibited here in the 'Any other Variety' class. As their numbers increased, Westies were given their own classes. After the Second World War, several imports arrived here including a couple of English Champions. When famous English breeder Maureen Murphy moved to Australia with 3 of her dogs, we saw some gorgeous Westies right across Australia. When she later moved to New Zealand, we saw a great improvement in Westies across the Tasman as well over several decades[4]. So, the Westies of Australia and New Zealand have excellent blood on which to build.

Comparison between the Cairn and West Highland White Terriers

Because of their historical connection, it is interesting to compare the Cairn and West Highland White Terriers. Not only are there many distinct similarities, the differences between these two breeds demonstrate the purpose for which these two breeds were originally bred.

[5] Edward C Ash, 'Dogs their Development and History' Published by the Houghton Mifflin Company, Volume 11, Chapter 11 'Terriers of the North and East' Page 436