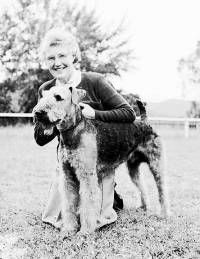 Sister Garrard was called a sister because she worked for a dentist. She bred under the 'OMUKA' prefix, and in 1936 began her breeding with a classy bitch by Ch STONLEIGH SOLARIO out of AUSTRAL VERA bred by Norman Myers. Her kennels were in in St Kilda Road - almost in the 'heart' of Melbourne.

Then she imported two dogs - the first Airedale to come to Australia with an English show title Eng CH WOLSTANTON PAM and WOLSTANTON ROCKET. They produced Ch Omuka Obstacle a big winning dog who was luckily mated to Ch AIRLIE BRUNETTE before he come to an untimely death. But she carried on as World War Two came to a close when in 1944 she produced a litter containing OMULA FLASH, OMUKA G and OMUKA MONTY.[1] 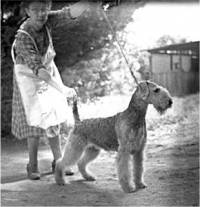 The first photo on the right is of Sister Garrard with Ch Omuka Monty. The second is of Mae Platts with ENG CH WOLSTANTON PAM. Unfortunately Pam had a soft coat which Sister Garrard used to dye her dogs with Condy's Crystals (Potassium Permanganate). Perhaps this story is true but I find it hard to believe that because Sister Garrard worked for a dentist that one of her dogs had false teeth! So malicious 'stories' of cheating are as old as dog shows themselves! 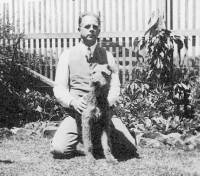 As Sister Garrard attended the Royal Melbourne Show 1946 with a puppy called 'Omuka Obliging' she must have kept her kennels alive right through World War Two. At that Show she sold 'Omuka Obliging' to Mr Wilfrid Thomas. From then on she was just called 'Trixie'.

Wilfred was raised as one of a family of ten children. The family operated a market garden in Highbury Road, Burwood. Animals were a large part of the family's upbringing, especially one Airedale. So when Wilfred married and had a family of two girls himself what could be a better playmate for his daughters than another Airedale!  So Trixie devoted the rest of her life to Wilfred's family. 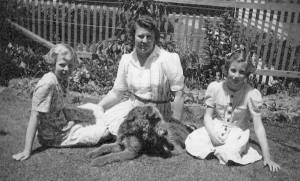 The Thomas Family with 'Trixie'

With family outings sitting up on the back seat of the car between the two girls, Trixie was strictly the family pet and was never exhibited at a dog show again. With her coat plucked out after each winter by finger and thumb, she was never strung up on a grooming table like Airedales are today. Instead, she and Wilfred sat together on the grass in her back yard while her coat was tidied up with finger and thumb and just a metal comb. As it was not common to use commercial dog food, Trixie was fed on fresh horse flesh purchased from the Camberwell Market and cooked vegetables. Although Trixie was never bred, de-sexing was not common either!

This story highlights just one of the many families who grew up with fond memories of owning an Airedale as the family pet because their parents had also spent happy childhood years knowing one. My sincere thanks to Beverley King (Thomas) who supplied the details of this story and for use of precious family photographs that have survived for more than half a century.