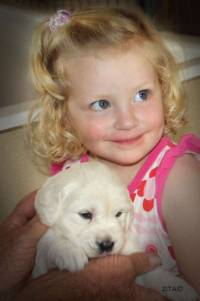 This section deals with a new puppy's arrival home. So the purpose of this section is to guide you through some of some of the common concerns that may arise. As outlined below, these are usually toilet training, feeding, introducing your new puppy to another family pet, and early puppy socialisation. 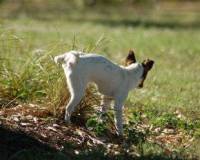 Toilet training begins from day one. It is exactly the same process as toilet training a young child. The trick is to 'catch' them. Puppies cannot hold on for longer than about half an hour when they are awake. Additionally, they usually wee and/or eliminate after food or when they wake up.

Take the puppy outside and put it on the grass or the spot where you wish it to 'perform'. If it begins to do so, stand very still wait very quietly until you know it has finished and then praise it. If you start the praise as the puppy begins to eliminate, puppies have such little concentration that it will stop midstream and might finish the job on your carpet! Never scold the puppy or rub its nose in its mistakes. That is an extremely negative action, which no puppy understands. If there is an accident, it is generally your fault because you have not been sufficiently diligent and left the puppy too long. With patience, perseverance and time, a pup soon learns to ask to go outside. 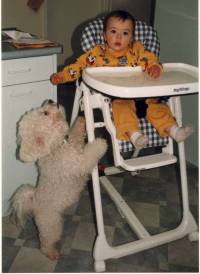 Routine is very important to young puppies and this must extend to meals, at least for the first two or three weeks. Have two bowls ready - one for food and one for water.

Introducing Puppy to another Family Pet 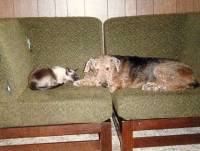 Introducing the puppy to another adult dog or cat that already lives with the family requires careful handling. Imagine how that dog must feel when a new puppy is suddenly dumped into its territory. Dogs and cats are territorial animals.

So the best way to avoid problems is to take them both to a neutral ground, may be a park, and introduce them for the first time. Let them sniff one another under your close supervision, praising the older animal for its patience.

Once you arrive home, allow the older dog to teach the new pup the rules of the house. Some adult dogs play a bit rough, but it is rare for an older dog to physically harm a young puppy. After all, dogs are pack animals and instinctively live by the rule that older dogs dominate the younger. That must extend to feeding the older dog before the puppy, so you show both dogs that you understand and respect the older dog remains the 'boss'.

It is also important to shut the puppy away from the older dog for a couple of hours at first a couple of times a day, reducing to at least once during each day. This way the older dog is given back its 'space' while the young puppy gets the sleep he needs. 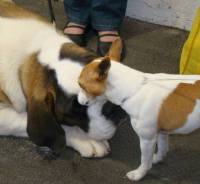 There is no substitute for advice from a conscientious breeder in the first instance, followed by classes with a reputable training school or club which may operate 'puppy socialisation' classes or 'puppy kindergartens' in your area. It is important that your very young puppy does not feel 'terrorised' by a dog much bigger dog, no matter how gentle the larger dog may seem. It is most important that your puppy's first experiences with other dogs away from the safety of its mother, are amicable.

These are popular and an excellent way of not only introducing your puppy to others of a similar age, but also to accustom your puppy to outings and the social environment in which we live.

I do not believe de-sexing has any effect on ease of training a puppy and de-sexing is no substitute for responsible dog ownership. By following this link the question of de-sexing is further explored.