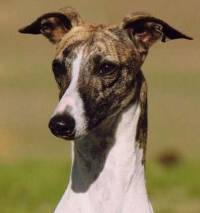 The Whippet is a modern, versatile, muscular and athletic breed. But they are also sweet natured, playful and responsive with people. They love to live indoors, their handy size and short coat making them an ideal pet for modern society. However, it is important to remember that being a Sight Hound, they must be well exercised and will take every opportunity to do so.

History of the Whippet

Small Greyhound type dogs have existed for Centuries as evidenced by various authors and works of art dating back to the 1700's. In both size and shape, the Whippet is halfway between the Italian Greyhound and the Greyhound. So although more modern than either of these two breeds, he was always popular for catching small game like rabbits and is often referred to as 'the working-man's Hound'.

In 1575, Caius wrote about a Hound that is 'the middle kind betwixt the Harrier and the Greyhound that is swift running, follows the game with eagerness and taketh the prey with a jolly quickness'[1].

There are two theories about the origin of this 'middle kind' of swift running Sight Hound. The first is that it was simply bred down from Greyhounds over several centuries. Certainly there are several works of art from the 1700's like the painting on the left above, that back up this theory. 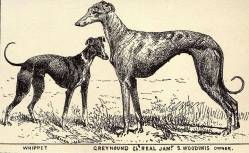 But as catching or poaching rabbits was often a necessity to provide food for the working class man, small dogs of Greyhound type similar to the one on the right, were used. So the second theory is that the Whippet was developed by the coal-miners of Northern England around the late 1800's and early 1900's, using Greyhounds crossed with other breeds, often Terriers. This cross produced what became known as 'the working man's Greyhound'. Then, the sport of coursing rabbits was born. 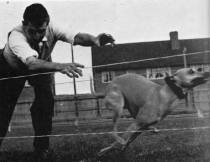 Whippet thrown into its stride

When 'Public Houses' or 'Pubs' became popular around the late 1800's and early 1900's, they attracted patrons with cheap beer and a means to place bets. Often in conjunction with these, tracks were set up for rabbit coursing. Wild rabbits that had previously been netted in the field were brought live to the 'Pub'. Participating dogs were recorded in a ledger, two by two, forming a knockout competition. Dogs were handicapped according to their starting positions. 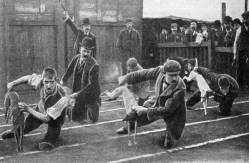 Whippets held by Neck and Tail

When all was ready, the 'slipper' (or handler of the dog) would kneel on one knee, holding his dog by the scruff of the neck and root of the tail as demonstrated on the left. When the 'starter' gave the word, the rabbit would be let loose at a particular spot, a predetermined distance from the competitors. When the starter was satisfied the rabbit was in full flight, he would fire a pistol. Then the 'slipper' would release his dog. An experienced 'slipper' would throw his dog several yards up the course so it landed perfectly in its stride and did not falter as demonstrated above. This required skill, judgement and the anticipation of which way the rabbit might run!

When rabbit coursing with live rabbits became politically incorrect, a rabbit skin or piece of rag was used instead of a live rabbit. So, the sport called 'Rag' Racing, was born. This was conducted in a similar way to the live rabbit coursing described above. But instead of one handler there would be two handlers for each dog. One would release the dog and the other would be at the opposite end of the course, waving the 'rag' and yelling encouragement to their dog[5].

The Whippet becomes a Pure Breed

Compared to the Greyhound and the Italian Greyhound, historically the Whippet is a relatively new type of dog. But as the Kennel Club (UK) recognized it as such as early as 1890, it is quite an old pure breed. This is because in 1899, just 9 years after it was recognized by the Kennel Club, the Whippet Club (England) was formed to write the Breed Standard which was in turn approved by the Kennel Club. So as the Whippet Club was one of the earliest Breed Specialist Clubs to take charge of the breed, writing a Whippet Breed Standard and approving breed specialist judges, making the Whippet is one of the earliest pure breeds[2].

History of Whippets in Australia 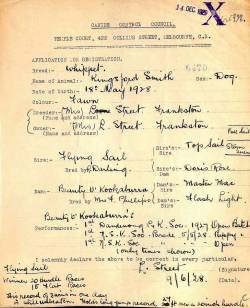 Whippet racing was first recorded in Australia in 1869, presumably along with the Sport of Coursing. When pedigrees began in Victoria, Whippets were recorded from 1923 and are now housed in our VCA Library. The one attached from 1928 is particularly interesting in that it also records the Whippet's Race Record. At that time there was a very active Victorian Whippet Racing Club.

But as far as pure breed Whippets are concerned, according to early Melbourne Royal Show catalogues, 'Caplin Bartic Whippets' were here by 1948 when 8 were entered in the Royal Melbourne Show of that year. 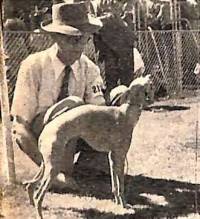 In 1951 Ch Caplin Bartic Coquette (pictured) won Best in Show at the Brisbane Royal. A son of his, Ch Flashing Cyclone was also a regular Best in Show winner prior to establishing the Amserham Kennels of I Payne and J Karas in NSW. Another early kennel was Miss Waddell's Waddellie Kennels of Inverell in Northern NSW, who imported Eng Ch Playmate of Allways followed by another 8 Whippets. By 1962 the Martinique partnership of Doherty and Crowley was founded, based on these existing lines. Martinique had a great influence on Australian Whippets, inspiring lots of established Hound exhibitors to progress Whippets in Australia[4]. 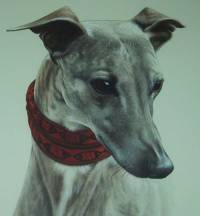 Numerous outstanding imports arrived here by boat before the 1970's. Then air travel became possible. So, instead of enduring months at sea, dogs could travel here in just a few days. However, a big deterrent was the quarantine period of up to 6 months which remained 'the norm' until the last decade or so. Many excellent breeders not only brought out beautiful Whippets, had also they had the knowledge to selectively breed them. It is beyond the scope of this website to name all the talented Whippet breeders we now have in this country. Suffice to say, Australian Whippets can successfully compete with Whippets bred anywhere else in the world[3].

An excellent way to understand the Whippet is by comparing him to his closest relatives, the Italian Greyhound and the Greyhound. The obvious differences are their gait, size and length of leg. The Italian Greyhound has proportionately the longest length of leg of these three breeds, the Whippet is more 'square' and the Greyhound has a body longer than height at withers. There are also some minor differences which makes the following comparison table interesting.

[1] Dr John Caius, "Of Englishe Dogges: The Diuersities, the Names, the Natures, and the Properties", London, 1576, translated into English by Abraham Fleming, Section 1 the 'Leviner' Page 15. The work was originally published in Latin in 1570 as "Johannes Caius, De Canibus Britannicis".Caius Section 1 the Leviner Page 15

[3] Frank Pieterse, 'The History of Purebred Dogs in Australia' published by OzDog Newspaper 1997. The Whippet Page 305-307