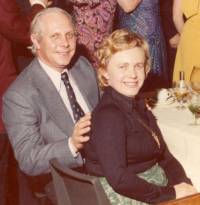 Alan and Pam Bardoe arrived in Melbourne from England in 1952 not long after their marriage. They were part of the 'ten pound pom' immigration scheme that was introduced into Australia after World War 2 to supply workers for Australia's booming industries. Alan was a salesman and could always spin a good yarn! His stories included those about the rescue Airedale 'Laddie' Alan and Pam had to leave behind when they emigrated. 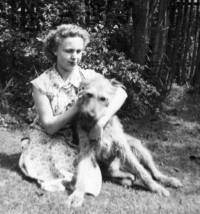 By 1985, Alan was working long hours and Pam was busy raising their two children when Alan's doctor suggested the addition of a dog to the family might provide some distraction from the pressure of his job. So Pam bought Alan an Airedale puppy for a present and they named her 'Raffles'. She was the daughter of an unshown Rangeaire bitch by Ch Rangeaire Rockabilly out of Ch Rangeaire Rag Doll.

A couple of years later, they decided to breed and registered the kennel prefix 'Devonaire'. As they knew May Platts through grooming Raffles, they used her stud dog at that time, Exmoor Leonard. He was a son of Ch Bengal Valley Forge (Imp UK). 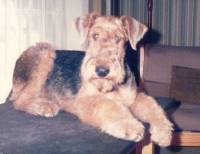 This union produced two litters from whom they obtained 'Devonaire Zara' (Hayley) who they bred in turn. When they were looking for a mate for Hayley, Alan and Pam made their first contact with 'Rangeaire'. 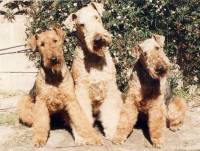 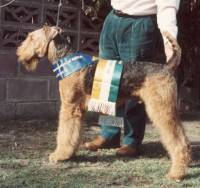 Then original plan of the line breeding came to fruition when Devonaire Disco Dancer, a daughter of Hayley was mated to Margaret Warren's dog, Ch Devonaire Ring Master, a son of Brigitte. This was their last litter which included 'Devonaire Lady O'Kent' (Cilla) and Devonaire Man O'Kent (Kent). 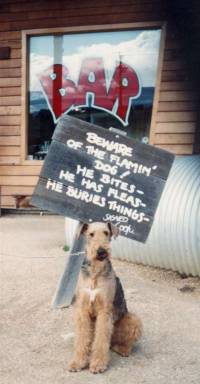 Then Pam went through a long and protracted illness through which Alan was devoted to her. Always at her side to support Pam in every way meant that Cilla and Kent were not shown extensively and were never bred. But their dogs were always there for Alan and Pam to provide the moral support they needed during this difficult time with their remaining Airedales keeping them sane - a job that Airedales do well! 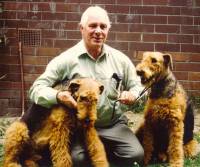 Alan with his last 2 Airedales

Airedales at 'Devonaire' spanned 30 years producing four generations in direct line, 5 Champions, one Obedience title, Companion Dog as well as providing a sound background for other breeders. All the Airedales who lived with Alan and Pam Bardoe were raised as part of the household and lived out their lives as their beloved family pets, with 'Cilla' surviving Pam and keeping Alan company until he turned 80 years of age.

Many thanks to Alan for supplying me with his precious photos, records, memories and assistance with writing this story. We believe the accompanying two photos, one taken of his beloved 'Jester' sitting outside the famous Australian Pub Ettamogah situated near Albury New South Wales and the other with his last to Airedales sum up Alan and Pam's love of both a good joke and their time with this breed. 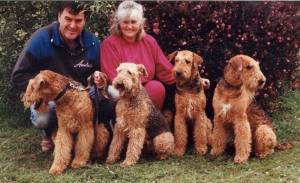 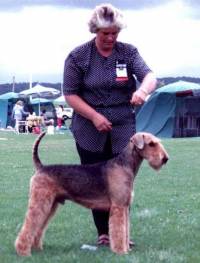 This foundation stock inspired Airewood Kennels to expand. Living on a property in country Gippsland they have produced many Champions.

Now another 4 generations on from their beginning with Devonaire, this kennel is still actively involved with breeding and showing 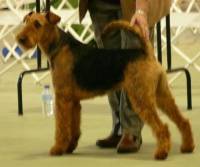