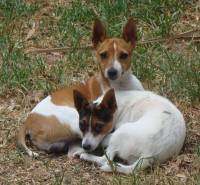 Australian in development, the forebears of the Tenterfield Terrier accompanied Australia's first white settlers who sailed from Portsmouth in England's South[1]. These small basically white dogs were vermin killers, surviving this harsh country without pampering.  Today they are strong, hardy, active and agile, their smooth short coat making them 'easy care' family companions. Their unique naturally occurring short or bob tail can come in any length. 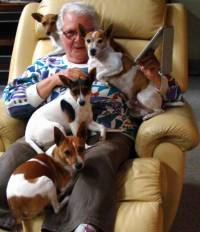 Their early history is described in the preceding sections. By the end of the 1980's 'Mini Foxie' Clubs had been formed in South Australia, Queensland, New South Wales, and Western Australia. By 1990, a group of interested owners decided that a Development Register for 'Mini Foxies' should be established, and a Breed Standard was written. South Australia must be acknowledged as having established the initial Development Register under the name of the 'the Mini Foxie Club of Australia'[4].

As previously described, in 2002, the name Tenterfield Terrier was chosen. This was in recognition of George Woolnough, whose Terriers were famous throughout the Tenterfield district in New South Wales. Affectionately known as the "Tenterfield Saddler" because of his profession making horse saddles and other leather goods, his name was immortalised in the song written by his famous grandson, singer-songwriter Peter Allen. 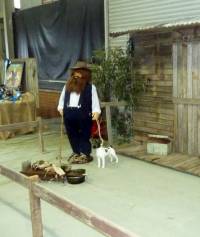 Under the new name, the Tenterfield Terrier Club of Victoria Inc became the first breed club to become affiliated. By 2009, the ANKC National Breed Council had been formed and the first National Show was held which I had the honour of judging [3]. What a Show it was, with a uniquely Australian post and rail fencing surrounding judging ring. Setting the atmosphere was a characterised George holding a model of a Tenterfield Terrier on a leash, set in front of a replica of the Tenterfield Saddler's Shop! Here the official photographs were taken. 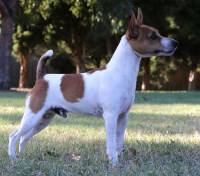 The Tenterfield is a smooth coated small Terrier with a square or compact body, measuring the same from withers to ground as withers to hindquarters. He is an versatile dog with no feature of his construction being in any way exaggerated. His most unusual feature is his naturally occurring bob tail which can be any length. 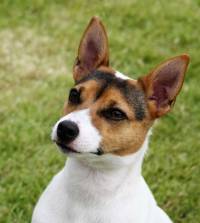 The Tenterfield's head is almost flat with just a hint of roundness or taper towards the ears. When viewed from the front or the side the head is wedge shaped and not elongated like the head of a Fox Terrier. Instead it should be equal in length from occiput to stop and stop to the end of his nose. Together with his almost flat skull, this gives his head parallel head planes. 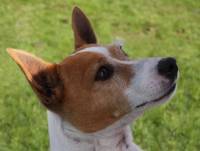 The muzzle is well filled up under the eyes and houses a normal scissors bite. The dark eyes should have fully pigmented rims rims and be slightly oval rather than large, protruding or round. The nose should be black but a brown nose on a liver or a liver tri-coloured dog is acceptable. The Tenterfield Terrier can have either pricked or erect ears or alternatively semi-erect ears. 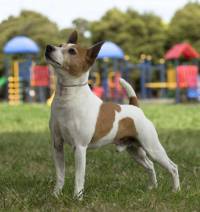 When considering the neck and body of the Tenterfield Terrier it is important to consider the 'pleasing proportions' described in the Breed Standard. Like the head, the neck should balance the body and not appear too long or too short. On the move, the neck should be carried proudly in a an upright position like the other long legged terriers, and should not be carried forwards in line with the back.

The body should be in proportion to the whole dog. It should not be longer than height at withers like the Australian Terrier or the Jack Russell, nor should it be proportionately short like the Fox Terrier. But because of the carriage of the neck and high set tail and the level topline, the body should appear to be short and compact. 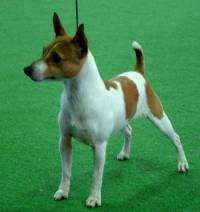 The shoulders should not be so heavily muscled  that they look as if they are 'tacked on' to the body like a Bulldog, making the chest appear too wide. Instead when looking over the top of the dog from behind, the shoulder muscles should not appear to be outside the general line of the ribcage.  The sternum of the moderately sprung rib cage should just reach to the elbow but not below because this small terrier has a terrier front to enable him to dig. 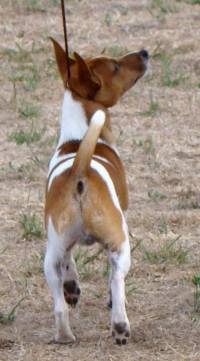 The legs have strong round bone in proportion to the size of the dog, and round feet. He has moderate angulation fore and aft. The hindquarters are well muscled and have a well turned stifle allowing for his amazing agility. This should be obvious when he moves at a trot with his balanced reach and drive.

His tail is quite unique in Terriers. It comes in any length from a full tail to no tail at all. Although any tail length is technically correct, a well set half tail balances the dog. A full tail can spoil the overall look of the dog, especially if it curls over the back to such an extent that the end of the tail breaks the top line of the dog when viewed in profile. But where the tail leaves the back or the tail set is extremely important as this can indicate the dog's temperament. 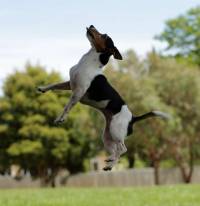 The Tenterfield is predominately white with black, tan or liver markings. Tri-colours, that is white with black markings and tan and on the cheeks, above the eyes and/or tan breeches is also common. Tenterfields can also come as a liver tri-colour which is predominately white with liver and/or tan markings on the cheeks, above the eyes and/or breeches. Brindle markings acceptable but not preferred. Full colour coats are not acceptable. The skin should always be pigmented, especially if the dog is almost all white. 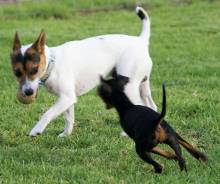 As a newly developed breed the standard allows a large size variation between 10 - 12 inches (25.5 - 30.5 cms). However because the Tenterfield was formerly called the 'Mini Foxie', the ideal height of 11 inches (28 cms) should be closely adhered to in order to retain the correct breed type.

As the wonderful temperament of the 'Mini Foxie' won the hearts and minds of many small children such as me, their popularity grew to firmly establish their place in many Australian family homes. The attached picture of a ball game is evidence of their sense of fun!