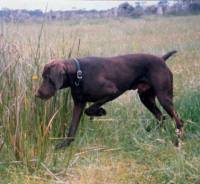 The German Shorthaired and Wirehaired Pointers are popular in Australia as the Rough Shooters' dog that can hunt, point and retrieve. Additionally they are able to track and mark wounded game both by foot-scent and air-scent. But not only are they staunch and steady in the field, they make obedient and lovable companions at home.

History of the German Shorthaired Pointer 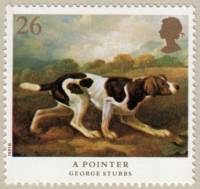 Ancient German Sporting Dogs had long, rounded ears and profiles without a definite stop. They were probably descended from the Spanish Pointer (now extinct) which was introduced into Germany by Flemish hunters in the 1600's. Usually liver and white, this dog had a heavy head and jowl, deep flews, a definite stop, upturned large nostrils, a heavy body, huge bone and docked tail. It was an  excellent Pointer who found game by air borne scent and hesitated before springing. This was useful when used for fowling. But his cumbersome build proved too slow for safe use with muzzle loading guns, the old type of firearms.

By the early 1800's, the Germans had combined the Old Spanish Pointer with an ancient dog developed from the St Hubert Hound or Bloodhound which had cold-trailing abilities of following scent on the ground. This original type of Scent Hound originated in the East and was brought to Europe by the Crusaders along with new kinds of other things like beautiful horses and stunning architecture. By combining the Old Spanish Pointer with this hound, the Germans were better able to fulfil their humane 'Hunting Code Obligation' in which the hunter would find and put out of misery any creature they had wounded. Additionally

'The use of firearms in hunting and the break-up of many of the large middle-European estates after the French Revolution and Napoleonic wars influenced the selection of dogs suitable for contemporary hunting. The British, with intact aristocracy retaining large landholdings, maintained specialist breeds: the Pointer (English), the Setters, the Retrievers, and several varieties of Spaniels for work in heavy cover. The middle Europeans found their requirements best served by a dog which would hunt, point, retrieve and follow blood scent: an all-purpose gundog'[8]. 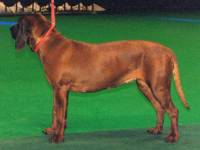 To this end, the German Schweisshund, a breed similar to the Hannover Schweisshund (pictured) was used[1]. Enthusiasts such as Dr Paul Kleeman, President of the Berlin Club, H F Seiger, E V Otto and Dr Von Dewitz were just a few who ruthlessly culled the slightest fault which could possibly hamper their requirements of the development of a breed with beauty, versatility and an enthusiastic hunting ability[9]. 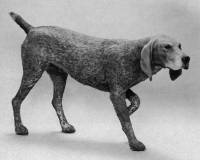 As guns became more modernised, the independent-minded shooter even in England required just one dog, which became known as the 'German Pointer'. An early example of this dog was Hector Fodersdorf (pictured), called a 'German Pointer' when he was exhibited in England in in 1887. This particular dog who stood 55 cm at the shoulder is preserved, mounted and on display at the British Museum of Natural History at Tring, UK[2].

So the GSP we know today is the product of the careful blending of the Old Spanish Pointer with the German Schweisshund, selected on the basis of 'Through Performance to Type[6]'. This useful handy sized dog can hunt by foot and air as well as point and retrieve. Hence one multi-tasked dog can do more than fill the role of specialised Setters, Pointers and Retrievers, their instinct becoming evident from a very young age as demonstrated by the pup pictured. 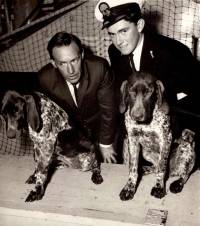 Australia's first two German Shorthaired Pointers (GSP) arrived Port Melbourne in November 1962 having sailed from UK. They were imported by Jack Thompson, who was later to become known as 'the Father of the GSP in Australia'. Pictured here from left to right are Dunpender Eva (with Jack) and Heathman of Friuli their combined names making up Jack's prefix 'Dunfrui'. Selected by Scottish breeder Micheal Brander, these two founded what was to become one of the most famous working Gundog dynasties in Australia's history.

Jack was not only a clever breeder, he had the vision to establish this new breed, the GSP in Australia. An exceptionally successful Rough Shooters' dog, it proved to work extremely well in our conditions. The GSP out-performed our other Gundog breeds not only in Field Trials, but also Retrieving Trials in the days before Specialised Utility Gundog Trials were available. In 1970, just eight years after the first two imports arrived here, it was written:

Spectacular performance on duck swamps, where shooting of wildfowl is carried out often in searing temperatures, was the first step. Onlookers saw the short-coated GSP outperforming the slower-moving, heavier built Labradors, Curly Coated Retrievers and suchlike because they were better equipped to withstand the above century conditions. Performances in the field, sometimes in even more stringent conditions, were also crowd pleasers, and the GSP began to come in ahead of the Pointers (English), Setters and the like in competitive Field Trials[4]. 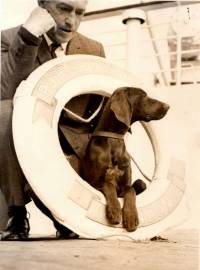 Jack with another import

After the initial success of the first pair, Jack brought out more carefully selected imports and founded the GSP right across Australia. Not only did these dogs do well in Field Trails, they also made their presence felt in the show ring. Within 10 years of the first pair stepping off that ship, an estimated 3,000 were owned in Australia, with 60 of them entered in the 1972 Royal Melbourne Show[7]. The accompanying photo is of a Field Trial also in 1972 with Jack Thompson and Jack Pontin. This illustrates that the GSP's prowess in Field Trials as well as their noble appearance and harmonious smooth outline, rightly earned them a place amongst Australia's most versatile Gundog breeds. 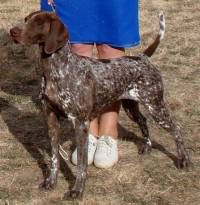 Although the first German Wirehaired Pointer arrived in Australia in 1976, it was not until the 1980's that this breed really became noticed[5]. Today they are kept alive by a small but dedicated band of enthusiasts.

Comparison between the German Shorthaired and Wirehaired Pointers

The obvious difference between these two breeds is their coat. However, at first glance in general balance German Shorthaired Pointers (GSP) may incorrectly be called square whereas the German Wirehaired Pointer allows up to 3 cms more length in the Breed Standard. Although the body of the GSP is proportionately shorter than some of the other Gundog breeds, his legs may appear just a little bit longer than his depth of body from withers to sternum as the accompanying photo demonstrates.