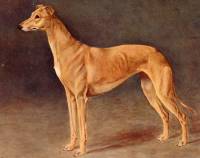 The Greyhound, one of the oldest pure breeds, was mentioned in the Bible (Prov 30:31) almost a Century before Christ[2]. So his breed type has remained recognizable for three millennia. Since early Egyptian times, in Northern Africa he played an important role in running hare and gazelle down for food, and coursing for the thrill of the chase. Also referred to in early Greek literature, his popularity among the aristocracy is documented by Assyrian artists, in early decorative ornaments and later in European art.

History of the Greyhound 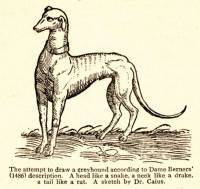 This wonderful description of a Greyhound is probably the first word description of any breed. Written in 1486 by Juliana Berners, a nun from the Abess of Sopewell in her book of St Albans on Hawking, Hunting and Fishing, stated the Greyhound should have:

From the earliest times, the Greyhound has been a dog of not only exceptional speed, but also capable of turning, dodging and changing direction whilst maintaining its balance at a double suspension gallop. Combine this with exceptional eyesight, we have the ideal Sighthound made famous by early aristocracy and wealthy landowners since the earliest of civilizations.

The Greyhound becomes a Pure Breed

Experience has convinced all coursers that a dog with plenty of length from his hip to his hock is likely to be speedy, because there is a greater than usual length of muscle to act upon the hock, and also a longer stride. The same unerring criterion has also led us to believe that a good back will give increase of power; in fact,... (with all other things being equal), size is power. But this law must not be taken without exceptions, since there must of necessity be a due proportion of parts, or else the successive actions for speed will not take place in due order and with proper regularity of stroke, and also because, by a well known mechanical law, what is gained in power is lost in speed or time. This framework, then, of bones and muscles, when obtained of good form and proportions, is so much gained towards our object; but still, without a good brain and nervous system to stimulate it to action, is utterly useless; and without a good heart to carry on the circulation during its active employment, it will still fail us in our need. Again, even if all these organs are sound and formed of good properties by nature, if mismanagement or other causes interrupt their proper nutrition by digestion and assimilation, the framework speedily falls away, and our hopes are irrecoverably wrecked"[6].

History of Greyhounds in Australia

In 1788 when the first settlers came to Australia, Greyhounds came with them. They began to be used to bring down kangaroos and related marsupials that were plentiful and provided meat for our earliest settlers. Then Greyhounds and Greyhound-Deerhound crosses were specifically developed for this type of hunting. These dogs were named Kangaroo Dogs[3]. By 1864, the Catalogue of the first dog show held in Melbourne shows that Kangaroo dogs consisting of 5 Rough coats and 15 Smooth coats were entered as well as 19 Greyhounds[4].

Sadly, the Kangaroo Dog was never recognised as a pure breed. When his job became redundant, the Sport of Coursing evolved, mainly for the entertainment of wealthy land owners. So Coursing Clubs became the guardians of Greyhounds[5], presumably also keeping Stud Books which preceded any other Australian pure breed dog records. 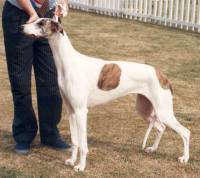 The modern Greyhound still bears resemblances to the original famous word description of 1486 AD above. Listed in the First English Stud Book published in 1874, today he is an upstanding dog up to 30 inches tall, (bitches around 2 inches less). He is a strongly built, muscular, powerful dog with a long head and neck, clean well laid shoulders, a deep chest, big body, slightly arched loin, powerful hindquarters, and sound legs and feet. His suppleness throughout his body and limbs gives him his distinctive breed type.

His long head is moderately wide with a flat skull, slight stop and powerful jaws housing a normal scissors bite. His dark eyes are oval and obliquely set and his fine textured ears are rose-shaped. 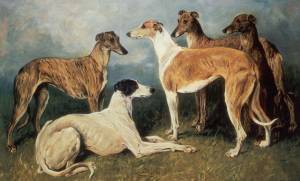 His neck is long and muscular, as are his forequarters but not excessively so that the withers are clean.The forelegs are long and straight and the pasterns and feet are of moderate length. This length of pastern and feet acts like a shock absorber, allowing for great flexibility for the spring required to enable the dog to have this far reaching low free stride when he covers the ground at great speed in a double suspension gallop.

The chest is deep allowing for lots of room for the heart and lungs, and the flanks are well cut up. He has a rather long broad back and a powerful slightly arched loin. This loin combined with very powerful muscular hindquarters gives him propulsion when galloping at high speed. When still, his muscular first and second thighs combined with well bent stifles, enables him to stand over lots of ground. The tail is set and carried low, but with a slight curve.

The coat is fine and close and comes in black, white, red, blue, fawn, fallow (light brown) or brindle or a mixture of any of these colours with white.

An excellent way to understand the Greyhound is by comparing him to his closest relatives, the Italian Greyhound and the Whippet. The obvious differences are their gait, size and length of leg. The Italian Greyhound has proportionately the longest length of leg of these three breeds, the Whippet is more 'square' and the Greyhound has a body longer than height at withers. There are also some minor differences which makes the following comparison table interesting.

Origin of the Greyhound

In 1570, Dr. Johannes Caius called the type of Gazehound that pursues prey swiftly Greyhound in his classification that was written in Latin and translated into English by A Fleming in 1576[1]. The original translation of this important work is in my opinion too difficult to read to be printed in its original form. So it appears here as my interpretation in modern English:

There is another kind of dog which, for his incredible swiftness, is called a Greyhound because the principal service of them depends and consists in bolting and hunting the hare. These dogs have the strength and lightness to tackle the game whether finding it, or taking the buck, the hart, the doe, the fox, or other beasts of similar kind. But each dog has instinct in proportion to its desire and the ability of its body. For it is a lean kind of dog, some bigger than others, some smooth and some curly coated. The bigger are appointed to hunt the bigger beasts, and the smaller serve to hunt the smaller accordingly.

The nature of these dogs is wonderful according to the testimonials. Jean Froissant[A] reports the following story about a Greyhound belonging to King Richard the Second when he was the reigning King of England. This dog never knew anyone, besides the King. But when Henry, Duke of Lancaster came to the castle of Flint to take King Richard: the dog left his former lord and master, and went to Duke Henry with conceived goodwill and as much affection as he had given the King before[B]. He followed the Duke around, utterly ignoring the King. So it was perceived that this dog was enlightened with the lamp of foreknowledge, predicting his old master's miseries and the unhappiness to come which King Richard himself evidently perceived. Such was the account of this deed of his dog, a prophecy of his overthrow.

[A] Jean Froissant (c. 1337 - c. 1405), often referred to in English as John Froissart, who was one of the most important chroniclers of medieval France

[B] King Richard the Second, the subject of Shakespeare's famous play was removed from the throne by Henry, Duke of Lancaster and imprisoned in the Tower of London. He was later removed from the Tower but kept as a prisoner and died, allegedly from starvation.

[1] Dr John Caius, "Of Englishe Dogges: The Diuersities, the Names, the Natures, and the Properties", London, 1576, translated into English by Abraham Fleming, Pages 14-15. The work was originally published in Latin in 1570 as "Johannes Caius, De Canibus Britannicis".

[4] Catalogue of the First Exhibition of Sporting & Other Dogs, Thursday & Friday April 7 & 8, 1864 promoted by the Council of the Acclimatisation Society, printed in Melbourne by Mason & Firth, Printers, Flinders Lane West Page 7