The End of BSL? 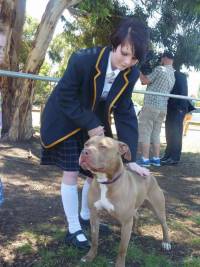 'The best Xmas present I could possibly have' cried Brodie when her dog 'Mylo' was returned into her arms just before Xmas. Mylo is one of the hundreds of mixed breed dogs which had been declared to be Restricted Breed dogs ('American Pit Bull Terriers') under Victoria's Breed Specific Legislation (BSL) brought in by the Coalition Government around three years ago. It took two years and seven months plus an estimated cost to one Local Council of $300,000 for the Courts to come to the conclusion that 'Mylo' was not an 'American Pit Bull Terrier'.

Mylo is just one of several dogs that have cost not only hundreds of thousands of dollars to successfully defend, but also cause unimaginable heartache to the dog' owners.

As the first ANKC licensed dog judge to be called upon to act as an Expert Witness in defense of a dog seized under Victoria's BSL, with no precedent to guide me, I had to put my own definitions into place as to what was an 'American Pit Bull Terrier'. Despite the Victorian State Government's 'Breed Standard', I found that any ANKC judge volunteering to act as an Expert Witness in a case of BSL had to address the following:

As Mylo's judgment and those of other dogs revealed, Courts need to determine all these questions. During Mylo's five separate Court Hearings, Barristers, Solicitors and Court judges all questioned the Expert Witnesses for hours and argued about the technical terms contained within the State Governments' 'Breed Standard' and their application to the dog in question.

So if Mylo is not an 'American Pit Bull Terrier', what 'breed' is he? Obviously some sort of mixed breed. Many of these mixed breed dogs that look something like Mylo have been murdered. This is not euthanasia, which is defined as a practice of killing to relieve pain and suffering. They were murdered because some Council Officer believed they complied with the 'Breed Standard' that the Victorian State Government concocted using our technical dog terms. But in the cases in which dogs were defended by ANKC qualified judges who acted as Expert Witnesses, almost all were successful.

'Mylo' was owned by a single parent's only daughter Brodie. He slept on her bed, played with him and trained him and was her constant companion. But one fateful day when her mother was at work and Brodie was at school, Mylo got out and was picked up by the Local Council. He did nothing wrong. But like hundreds of other mixed breed dogs, the Council Officer determined that Mylo looked like an American Pit Bull Terrier as described in the State Government's 'Breed Standard'. But fortunately one of the many people who have fought BSL became aware of his plight, and his defense was instigated.

Mylo is a friendly dog who is certainly no threat to the community. Even after being 'institutionalized' by the Lost Dogs Home for two and a half years (at a purported kenneling cost of $25,000) he was still the outgoing loving clown Brodie brought him up to be. His temperament was never in question, it was only his physical looks. That's why it took two Supreme Court actions plus three VCAT hearings, each of which lasted several days, to free Mylo. The Barrister's Animal Welfare Panel (BAWP) provided his legal representation pro bono. Without them one can only speculate what his total costs could have been.

But now the nightmare for Mylo and Brodie is over. He went home just before Christmas. I believe the change of State Government helped with this outcome. Let's hope 2015 will see this ridiculous BSL removed by the new Labor State government following its promised review, so the dog loving people of Victoria will have the right to responsibly own the breed or mixed breed of their choice.

P.S. In 2017 the new Government did overturn the BSL Legislation.