The historical use of Setting Spaniels or Setters was first described in French in the 'Hunting Book of Gaston Phoebus' of France in 1387 AD and was translated into English by Edward, Duke of York into a book called 'The Master of Game' between 1406 and 1413. Dame Juliana Berners also described them in her 'Book of St Albans' published in 1486. Furthermore a distinguishable Setter appears in the Devonshire Hunting Tapestries (pictured) of around 1450's [5].

Setting Spaniels or Setters first appeared in Britain in the late 1400's when a bond signed by a John Harris on October 7th, 1485 agrees to keep for six months to train a certain spaniel to 'set partridges, pheasants and other game for ten shillings of lawful English money' [4].

Though today's Setters are divided into four distinct varieties, there can be no doubt that all have a common origin. Most authorities agree that the Spaniel (Sporting) had definite influence and of all the theories put forward, the old Spanish Pointer seems to have somehow completed the mix [5].

As in successive Toil the Seasons roll
So various Pleasures recreate the soul
The setting Dog, instructed to betray
Rewards the Fowler with the Feather'd Prey [2]

In the 1500's Robert Dudley, Earl of Leicester who was supposed to have been the first person to train setting dogs in the manner which has been commonly adopted by his successors. Being a contemporary of Dr Caius, it is believed he had an influence on the description below [1].

In 1570, Dr. Johannes Caius first classified the Setting Spaniel. Dr. Caius' classification was originally written in Latin and translated into English by A Fleming in 1576 [3]. The original translation of this important work is in my opinion too difficult to read to be printed in its original form. So it appears here as my interpretation in modern English: 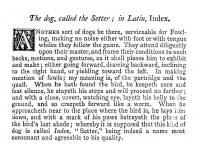 There is another sort of dog called a 'Setter' which is suitable for fowling partridge or quail because of the way in which he works. This dog makes no noise either with foot or tongue whilst it follows the game. These dogs diligently obey the direction of their master's voice or signal commands and gestures which bid the dog to go either go forward, draw backward, incline to the right, or yield toward the left.

When the dog finds the bird, he keeps silent. He stops and with a close, covert, watching eye, lays his belly to the ground, he creeps forward like a worm. When he approaches near to the place where the bird is, he lays down, and with a mark of his paws betrays the place of the bird's last abode. Once the fowler has observed his dog marking the spot where the bird is, he immediately opens and spreads his net, intending to take the bird. The dog is then signalled to rise up and draw nearer to the bird, despite probably being already ensnared and entangled in the net. 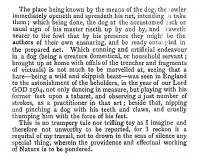 However catching hare with a net is a different matter and one to be marvelled at, remembering that these dogs are domestic creatures or household servants, brought up at home with offal and fragments of food. But hare is a wild and skittish beast and one has been seen ensnared in a net with a poor dog, nipping and pinching it with his teeth and claws, and cruelly thumping him with the force of his feet. This is no trumped up tale nor trifling story but it is worthy of being reported, that this poor dog was expected to suffer drowning in seas of silence.

[3] Dr John Caius, " Of Englishe Dogges: The Diuersities, the Names, the Natures, and the Properties", London, 1576, translated into English by Abraham Fleming, Pages 19-20. The work was originally published in Latin in 1570 as "Johannes Caius, De Canibus Britannicis".