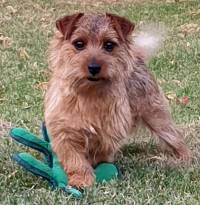 Standing just 10 inches (25-26 cms) high, the Norwich and Norfolk Terriers are the smallest of the terrier breeds.With only minor variations, their Breed Standards may appear identical except for the ears. But an in-depth study of these two breeds reveals how breeds develop differently once the gene pool is split.

History of the Norwich and Norfolk Terriers 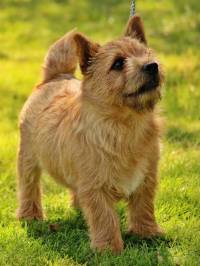 Norwich Terriers were first developed in England around Cambridge University when a breeder, Charles 'Doggie' Lawrence became notorious for selling these small ratting dogs to the undergraduates of the University. Probably, these little dogs were considered to be the forerunners of what we know today as Norwich and Norfolk Terriers. 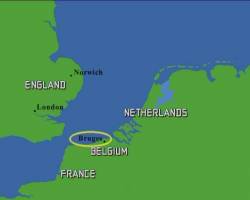 A couple of millennia ago, it was usual practice for Terriers to travel on trading ships to kill the rats and mice on board. At that time, continuous trade took place between Bruges, Belgium and Norwich, in the region of Norfolk which is in the east of England, close to Europe. 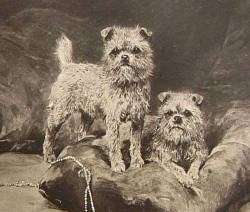 Historically, puppies with both dropped and pricked ears were born in the same litter. But during the early 1900's, intense arguments broke out between the owners of those dogs with pricked ears and owners of those with dropped or button ears. In 1964 the Kennel Club (UK) stepped in. Their decision was to split the breed into two based wholly on ear carriage and give them separate names. So today we have two separate breeds, the Norwich and Norfolk Terriers. Half a century later the two breeds have remained almost identical. However, a few minor differences may be observed by diligent students and breed enthusiasts.

History of  Norwich and Norfolk Terriers in Australia 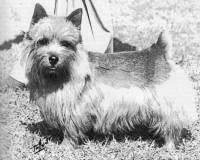 In Australia a couple of Norwich Terriers were first imported here in the 1950's and 1960's. Despite being successfully shown in the 1970's, the breed did not really get going here until Ley and Pat James imported several into Cairns situated in North Queensland. In 1978 they brought out Thrumptons Lord Micka (Imp UK) who  really put Norwich Terriers 'on the map' here in Australia[3].

In Norfolk Terriers it was not until the 1970's when an imported dog and 2 bitches including one in whelp, were obtained by Robert Bartram of Canberra. The progeny of these did very well for Warren Goldsworthy and Liz Hindley. Mrs Iris Tuckett also imported several Norfolk into Victoria, making this breed known throughout the Eastern States[3]. 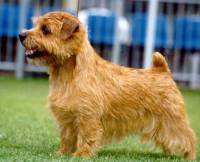 Later, Ron and Anne Sorraghan brought in this beautiful little dog from Norway (pictured) who really put Norfolks on the map here not only in the show ring, but also as a sire.

The Norwich and Norfolk Today

The Norwich and Norfolk Terriers are among the smallest of all the terriers. But they are keen, compact and strong, with good substance and bone. Although extremely active, they love human companionship and their human families. 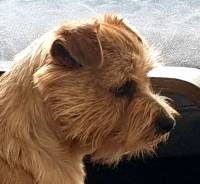 The head  is wedge shaped, with a broad skull. The length of the skull is two thirds the length of the muzzle. These measurements are taken from the bottom of the well-defined stop. As with most breeds with a broad skull, the ears are are set wide apart. The eyes are small, oval shaped, dark, and full of expression. The teeth on these little terriers historically have been adapted for ratting terriers. Consequently, they can be amazingly large and strong. Configured in a normal scissors bite occasionally seen on these little dogs, should be appreciated by breeders as well as being rewarded by those judges who claim to have a knowledge of terriers. 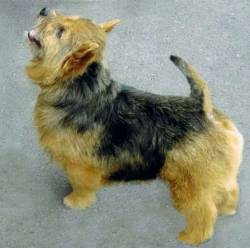 Because of their high-set tail, although their body is described as compact, it is longer than square. The ribcage should not extend below the elbows. This ensures the front legs have no reason to be other than perfectly straight. Although rough coated, modern coats of the Norfolk and Norwich are tidied up for the show ring. Trimming must never be excessive, the example on the right being ideal. Note that a ruff to frame the face of the Norwich, is required. Both breeds come in all shades of red, wheaten, black and tan, and grizzle.

[3] 'The History of Purebred Dogs in Australia' published by OzDog Newspaper 1997, Norfolk and Norwich Terrier by Mrs Liz Hindley Page 231