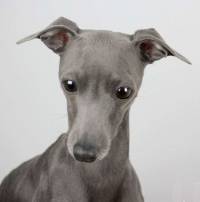 Despite the Breed Standard of the Italian Greyhound stating he is 'a Greyhound in Miniature', he is not a dwarfed Greyhound or Whippet. However, he is the smallest of the Sight Hounds. With his small size and unique gait defining his breed type, today he is a distinctive, clean little dog that has adapted well to the demands of modern society.

History of the Italian Greyhound 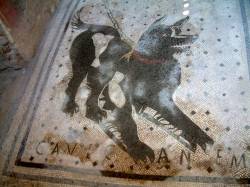 The Italian Greyhound probably originated in Egypt as a breed in its own right, rather than being a miniaturized version of a Greyhound. From Egypt he then spread to Italy, along with the expansion of the Roman Empire. But it could be claimed that he originated in Southern Europe rather than Italy specifically. The Latin expression 'Cave Canem' which dates back to Pompeii in Roman times around the 2nd Century AD, is believed to mean 'Beware of the Dog'. But this expression does not refer to trespassers. Instead, it means 'Don't step on the little dog' referring to the small hounds that lived in Italian settlements at that time! 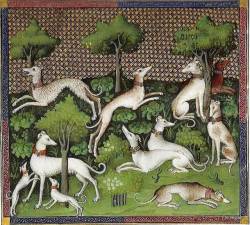 'The Book of the Hunt' by Gaston Phœbus published in 1387-9 AD contains some remarkable illuminated manuscripts depicting various hunting scenes. The Sight Hounds shown here appear to have similar construction but vary in size. Small hounds that were favourites of Royalty since these early times, were also the subject of early tapestries and other art forms, especially in Renaissance Art around 1500 AD. Historically this small hound was also used as a bed warmer before the days of more sophisticated household heating. The name we know him by today, 'The Italian Greyhound', reflects where he was first popularised. 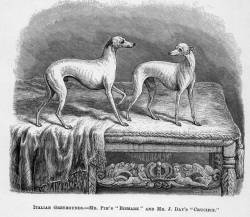 By the 1800's the Italian Greyhound was well known in both Italy and Britain. They were first shown in Birmingham, England in 1860 and registered in the English Stud Book from 1875. Unfortunately, in Britain miniaturisation led to skinny, frail, and shivery apple-headed specimens weighing only 4 lbs (2 Kilos), which made them lose their appeal to the general public.

In USA they first appeared in 1886, and were exhibited at the famous Westminster Kennel Club in 1877. There were just a few breeders of note on both sides of the Atlantic at this time that have been reliably recorded. But with the English Stud Book usually only recording single names like 'Flip' for each dog exhibited, accurate pedigree research is difficult. 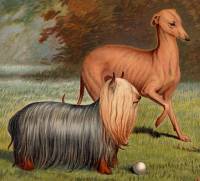 However, there were some wonderful breed descriptions written in this period. For example this word picture of the Italian Greyhound's unique gait penned by Stonehenge in 1886 describes this as a

'... remarkable 'prancing' action which is almost invariably exhibits with its forelegs. No other animal, as far as I know, possesses this action to the same extent. It is true that some horses lift their legs till, as the dealers say "are in danger of putting their feet through their curb chains;" but this is done in a comparatively heavy and lumbering style, without the true dance-like "prance" of the Italian Greyhound. Occasionally, but very rarely, an English Greyhound, or even a Deerhound, exhibits this action to some extent, but even then it is exceptional; whereas in the Italian it is the rule, and almost and invariable one[1].' 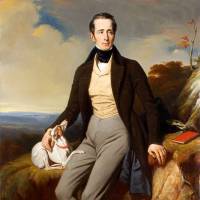 Italian Greyhound numbers suffered badly as a result of the two World Wars. Registrations with the Kennel Club (UK) in their Stud Books hit single figures from 1914 - 1923 and again from 1940 - 1946. But they recovered so well that by 1958 there were 100 registered. By 1992, 147 individual dogs had been awarded Championship status since the end of the Second World War[4]. This enabled the remainder of the Western world to access correct type Italian Greyhounds. 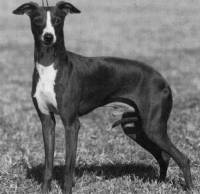 History of Italian Greyhounds in Australia

As Australia did not have a Stud Book until well into the 1900's, any Italian Greyhounds imported into Australia in these early days had no means to record them. In other words although some may have had English pedigrees, there was no means to authenticate them even if they were entered in the English Stud Books! Consequently forgeries were common. Several references that document Italian Greyhounds being exhibited here prior to 1900, have no reliable published names of the dogs or their owners or breeders, either in Melbourne or in Sydney. 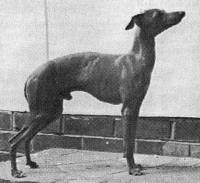 As this website is written and published in Melbourne where we have an extensive Library, we can paint some sort of a picture from early show catalogues. We publish this information at the bottom of this page, hoping some interested party will go through the pre-1900 English Stud Books where this information is published. This would give Australian Italian Greyhound enthusiasts some reliable information about their beginnings here. But they died out until 1958 when Mrs Sapio of the Crutchfield prefix, imported a breeding pair into Queensland[3]. From these Barbara Skilton with her El Tazzi prefix was one of the early Italian Greyhound exhibitors[4a]. By the 1970's Lyn Watson (then Schelling) had produced Shaaltarah Cesare (pictured), who became a multiple Best Exhibit in Show winner and put Italian Greyhounds on the map in Australia.

An excellent way to understand the Italian Greyhound is by comparing him to his closest relatives, the Whippet and the Greyhound. The obvious differences are their gait, size and length of leg. The Italian Greyhound has proportionately the longest length of leg of these three breeds, the Whippet is more 'square' and the Greyhound has a body longer than height at withers. There are also some minor differences which makes the following comparison table interesting.

Pre-1900 History of the Italian Greyhound in Australia

At the first dog show held at the Exhibition Buildings in Melbourne in 1864, there were 17 Italian Greyhounds listed. But there were only three listed at the second dog show also held at the Exhibition Buildings the following year in 1865. Of these, only 'Jessie' owned by Mr Kong Meng of Albert St, presumably what is now North Melbourne, was only one of which was listed in both 1864 and 1865 shows. Then in 1872 at 'Second Grand Exhibition' held by the 'National Society of Victoria' which preceded the 'Royal Melbourne Show', there were 4 Italian Greyhounds listed, none of which have either dogs or people's names which correspond to any of the other catalogues.

'Tyzack's Annual', in his 'Imported Dogs' section states that Italian Greyhounds were exhibited at an 1868 Dog Show at the Duke of Edinburgh Theatre (now Eastern Arcade), but there is no mention of the dogs or owners names. But Tyzacks does state Mr Julian Thomas imported 'The Vagabond' with no further information except it was before Quarantine Regulations were introduced here in 1882[2]. The Victorian Poultry & Dog Society catalogue 1892 lists one Italian Greyhound 'Peter' number 2724 belonging to E Pinder. The same dog also appeared in the Victorian Poultry & Dog Society 1893 catalogue, together with two other exhibitors which do not relate to any of the others. After 1900, Italian Greyhounds disappeared here until 1958.