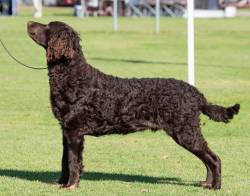 The Murray River Retriever is the latest ANKC recognised pure breed. An Australian icon, it is also Australia's only home grown Gundog. The earliest reference has been traced back to early to mid 1800's and they have breed true ever since. A fair dinkum Aussie, its high-set well furnished ears that frame the face, give it its unique  expression.

History of the Murray River Retriever 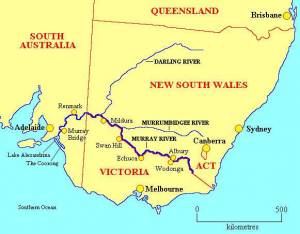 The history of Murray River Retriever began in 1827 with the exploration of the Murray as well as the Darling and Murrumbigee River systems as they meandered through kilometres of barren land. In the absence and roads and railways, by the 1850s around 200 paddle steamers were responsible for trade by means of this river system. These boats brought essential stores to early settlers that were traded for wool and the fresh food products being transported back to the cities to be sold. 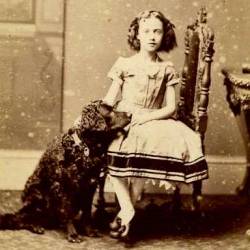 By 1853, the Murray River system had become the main highway for settlers and trade between the three Australian States of New South Wales, Victoria and South Australia. On board the paddle steamers, Murray River Retrievers became watch dogs for the families who lived on paddle steamers but more importantly made it possible for the early settlers to survive on wild ducks for food.

Between 1845 and 1852, when the Murray River exploration was taking place in Australia, the potato famine was at its worst in the west and south of Ireland. Meanwhile, in England the Irish Water Spaniel became a recognised pure breed with its unique external features accepted by the Kennel Club (UK). They were listed in the First English Stud Book. 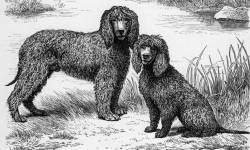 Consequently, the most important features of a dog required to cope with the conditions along the banks of the Murray were inherited from its Irish Water Spaniel ancestry. These included the specialised waterproof oily, curly, coat which specialised coat helped the dog cope with the harsh, cold, wet conditions. These dogs also had to have large feet and powerful bodies capable of working in the bogs and swamplands.

As well as these physical characteristics, the developing breed had to have the ability to make the unilateral decision to kill and retrieve wounded birds and animals rather than allowing them to escape. These were the characteristics helped many Irish people survive on the ducks these dogs caught when their potato crops failed.

Additionally, during the potato famine, the poor Irish farmers were also forced to pay exorbitant rent to the wealthy landowners. To exacerbate matters, England put such a high tariff on grain and alternative foods like corn and bread, these became prohibitively expensive. Consequently, an estimated one million Irish people, around 25% of Ireland's total population, died from starvation. To escape these dreadful conditions, another estimated one million people emigrated to other countries particularly Australia and USA, accompanied by their beloved Irish Water Spaniels. 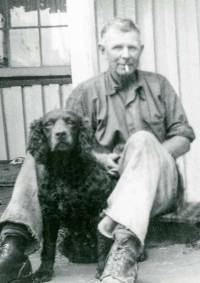 Between 1859 to 1889, Australia was an attractive destination because it offered sponsored passages to free settlers. This resulted in some 300,000 Irish Free Settlers arriving in Victoria from 1840 making up a quarter of all overseas-born immigrants. Certainly, some of the immigrants sought their fortunes during the gold rush of the 1850's around Ballarat and Bendigo. But others chose to develop the countless kilometres of barren land surrounding the Murray River system. Hence small settlements became established along the river systems of NSW, Victoria, and South Australia.

With survival being the top priority of the Irish people escaping the potato famine, wild ducks and other water birds and game along the banks of the Murray River system also provided these early settlers with essential food. Their Irish Water Spaniels were described as 'a little hard mouthed and headstrong, but a Jack of all trades'. They looked like the dog in the accompanying pictures 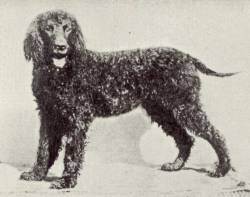 The next 150 years have never been accurately documented. With no Stud Book capable of co-ordinating and recording pedigrees across the three States of the Murray's development, confusingly the breed became known under different names. These included the Murray River Curly, the Murray Curly Retriever, Murray Reds, and Murray River Duck Dogs.

These 150 years also saw more sophisticated guns develop. Quick and easy voyages from Britain became revolutionised by air travel rather than spending months at sea.  During this period, other pure Gundog breeds, particularly the Curly Coated Retriever were imported. Sadly, some of these foreign breeds interfered with the Murray River Retrievers' biggest asset of being capable of finding, pointing, and retrieving game under Australian conditions. 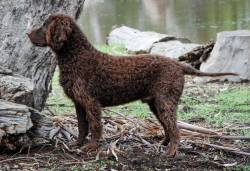 Murray River RetrieverToday, the Murray River Retriever, is still popularly called 'the Murray'. It is the only Gundog whose country of development is Australia. The modern Murray has a soft mouth as well as natural ability to find, flush and retrieve small and large game. The Murray's carriage and attitude is that of a confident, energetic, focussed dog who loves water. A "Jack of all Trades", its outline is rectangular, it has a liver-coloured curled coat and distinctive webbed feet. His height at shoulder is 46-53cm (18-21ins). 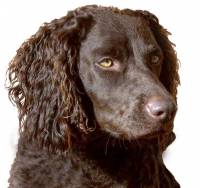 The head is of medium length to balance the body. The skull should be broad, and flat with high set ears covered with sufficient hair to frame the face. The moderate stop rises from the strong muzzle  and parts the skull as it dies away towards an inconspicuous occiput. The cheeks should be flat.

The well chiselled muzzle should be deep, without excessive flews and houses a normal scissors bite. The nostrils should be large and open and match the coat in colour. The hazel eyes are almond shaped, medium sized, and set underneath brows and range from amber to light brown in colour.

The high-set moderately large dropped ears are covered in long, wavy hair which frame the face. If the ears are set too low on the head, they no longer frame the face causing the dog to lose its unique expression. This can also cause: 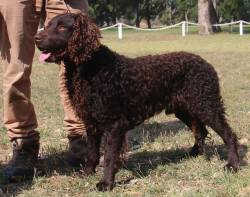 The neck is strong, of sufficient length to enable the dog to pick up game on the move when retrieving. The well-laid shoulders should be approximately equal in length to the upper arm.

The height from withers to ground is shorter than the length of body from point of shoulder to buttock. This means the body is longer than it is high. The chest is moderately deep, the ribs well sprung, extending into a deep, powerful loin with a slight tuck-up of flank.The straight well boned forelegs should be set well under body. The bone is round and the pasterns strong, but very flexible. The ribs are well sprung with moderate width and depth and an obvious prosternum. The neck is of medium length. The large, round and spreading feet have webbing between toes and brown nails. 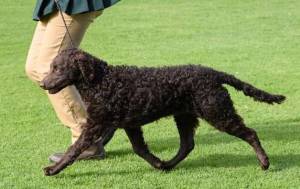 The deep, muscular loins and strong hindquarters should balance the overall structure of the dog. The thighs are powerful with muscling down to the moderately long and well-developed second thighs. Well-turned stifles and strong hocks are also essential for the dog's extension and drive when moving either on land or in water. The straight and level topline ends in a tail that may be carried in a straight or sabre-shape on the move.The Murray is quick and very agile, moving freely without lumber. 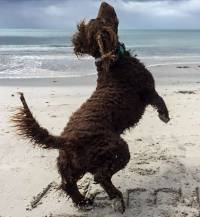 The coat is always liver in colour, the hair on the head is smooth until level with the ear set. From the back of the skull to tail tip, the coat is loosely curled. There may be slight feathering on the back of the forelegs, the front of the legs being smooth. The coat feels oily but never harsh, and is sufficiently thick to protect the skin from cold water and punishing cover while retrieving.