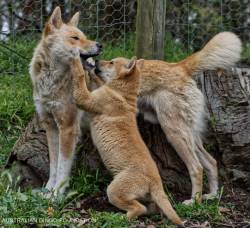 Male Dingo playing with its pup

Dingos are not a just another breed of dog. DNA testing had proved that Australia's wild dog, the Australian Dingo is a unique species all of its own. Technically called "Canis Dingo", it is Australia's top predator. Although it may it vary a little according to whether it lives among the mountains, on desert plains or among forest areas of this vast country, as a hunter-gatherer, centuries of environmental factors have shaped the Dingo.

The Dingo's unique characteristics include its bark-howl, which allows communication within their family pack for up to 200 meters regardless of environmental conditions[1]. The Dingo also has an absence of a fat layer combined with an inability to digest fat which means it is always a lean animal. The Dingo also has amazing flexibility in its joints. Blended with its intelligence and its ability to see, hear and smell better than any other canine, our Australian wild dog is quite different to any other dog.

History of the Dingo 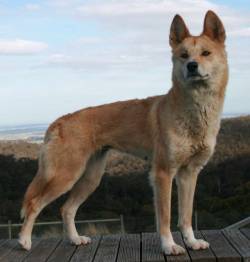 Modern science and DNA technology believe the dingo has been present in Australia for 10,000-18,000 years, possibly even longer! Their DNA tells us they have been developed separately, but probably in parallel with Wolves, Coyotes and Jackals. These can interbreed with similar wild canid species when living on fringes of other canid habitations and human settlements. However, DNA and molecular biology tells us Dingoes have not directly descended from these other species. Instead it has evolved separately, developed over millennia for solving tasks nature presented across this vast Australian continent. Consequently, studies have proved they also developed amazing intelligence without any interchange of other wild or domestic genetic material.

The development of the Dingo we know today has evolved without the human influence that interfered with the make and shape of our domesticated breeds of dogs. Over a four-year study of intelligence by instinctive behaviour in problem solving, the  prestigious Universities of Yale, the Canine cognition lab ranked our Australian Dingo top of all the canids tested. This ability sets not only to survive, but also to function as the top predator in Australia's such a harsh environment[2].

While we provide all the 'mod-cons' for our various breeds of dog that have been developed to enhance our lives, Dingos had be self-sufficient and live independently alongside rather than with humans. That meant Dingoes had to not only chase down their own meals, but also construct their own dens and move around their own territory, concealing themselves and their entire family packs from any perceived enemy. 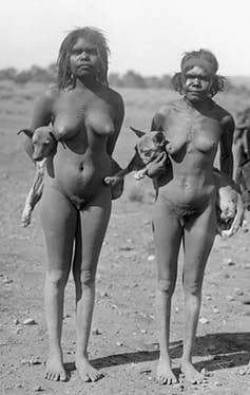 Before British settlement, Dingos lived in harmony within traditional Aboriginal societies. As a transient phase in the Dingo's life cycle, on maturity Aboriginal people would return grown pups back into the wild to breed. The consequent young pups would then be raised by aboriginal women and adopted back into their society. For example, female members of the Central Australian tribe pictured, used to carry young Dingo pups across their backs to enjoy the warmth of their bodies!

Additionally, Dingos possessed the unique skill of locating water above and below ground which was lifesaving for many humans, particularly pioneers of early British settlement. In aboriginal mythology, the ability of Dingos to trace pathways across the continent of Australia from one water source to another, was the subject of many Aboriginal legends. For thousands of years Dingos maintained dual roles as human companions and top-order predators, while retaining their independence and essentially wild nature[4].

The Dingo's instinctive respect of the land holds a significant place in the spiritual and cultural practices of some Aboriginal and Torres Strait Island communities as well as a growing number of modern thinking Australians.

British Settlement and its Effects 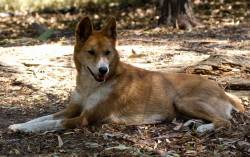 However, in 1778 when the British invaded Australia, introduced several species which changed the Dingo's life forever. With colonisation came farming which decimated much of the Dingo's natural habitat. The British also brought domesticated dogs with them which mated with our Dingoes.

On the positive side, when selectively bred in captivity the resultant hybrid gave our specialised sheep and cattle dogs, the Kelpie and the Australian Cattle Dog, the stamina and athleticism required to work in this harsh environment.

On the negative side, the British introduced rabbits and foxes purely for recreational purposes. These species thrived, decimating many of Australia's indigenous native marsupials which had previously lived for hundreds of years in harmony with the Dingo. To compound the issue, the British who grabbed land trapped, poisoned and shot thousands of Dingoes, blaming them for the damage probably caused by the hybrid dogs that killed or maimed their sheep. 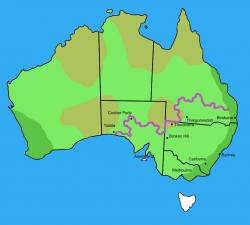 Their extraordinary efforts to keep Dingoes off what the British grabbed as their properties, included building a ridiculous Dingo Fence. This stretches from Nullarbor Plain across to the west of Brisbane. Built during the 1880s, its purpose was to keep dingoes off the relatively fertile south-eastern part of the New South Wales Colony.

At nearly 5,000 kilometres (3,500 miles) in length, it is among the longest structures in the world! However, because Dingos are so intelligent, clever and physically flexible, they managed to find holes to squeeze through or make holes to tunnel underneath it! The new settlers obviously did not understand or appreciate the thousands of years of natural selection it took the Dingo to develop its compatibility with Australian environment!

A Word Picture of the Dingo 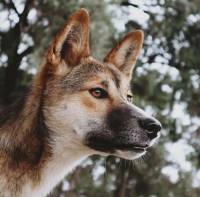 This 'Word Picture' describes our Australian wild dog, the Dingo. This is not meant to be a Breed Standard describing physical components some person might believe the Dingo should have if it was a pure breed. Instead, this Word Picture attempts to explain the Dingo's characteristics we see today. However, to describe the Dingo's natural instincts that have made it so unique, is beyond the scope of this Word Picture.

The Dingo is lean with no fat layer weighing between 15 and 20 kilos (33-44 lbs). They are mostly ginger in colour with various white markings, while in forested areas the fur can be a darker tan to black. In other words it can also be black and tan. During late autumn the Dingo can grow a second thicker coat for warmth which usually sheds by mid to late spring. 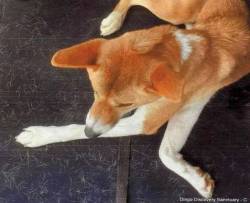 When hunting the wide head prevents the dog from squeezing into small nooks and crannies that are so small the dog would be in danger of the dog not being able to reverse out of again. Yet its long long, narrow ribcage combined with its usually static joints gives it the ability to flex to straight and acute angles that would be unusual in most of our domestic dogs. For example, the Dingo pictured is comfortably lying with its elbows crossed!

Variations in the Dingo

Indigenous to the entire Australian continent, the Dingo had to hunt to survive in Australia's various ecosystems. Although all the same species, the Dingo has adapted in coat and general build according the whether or not it lives in the following habitats: 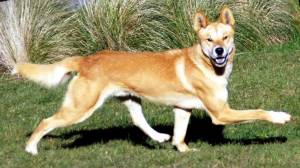 1. The Alpine Dingo evolved in the Australian Alps of Eastern Victoria. It has a thick double coat with a voluminous soft, warm undercoat and a particularly full, bushy and luxuriant tail.

2. The Desert Dingo evolved in the wide open spaces of Central Australia. With its slightly longer legs than other Dingoes, it can run swiftly across desert sands. Additionally it does not have the thick double coat of the Alpine Dingo. Instead it only has a short coat on its body which is somewhat harsh, but it retains a somewhat bushy tail.

3. The Tropical Dingo which evolved in the forests and wetlands North and North Western Australia. They are smaller in stature so can climb up rock faces, and have a far smoother coat[3]. 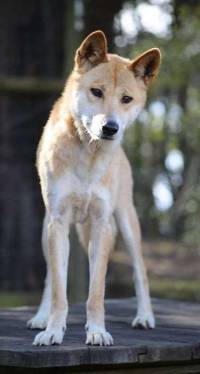 The Dingo's head appears wide in comparison with its body. This prevents it from entering narrow crevices between rocks when searching for food and water. After all, if the dog could not retreat back out of the chasm again, it would get struck and die an agonising death!

The wide head is triangular in shape. The broad skull gives its mobile ears hood shaped ears plenty of room to rotate dynamically, swivelling the opening to the rear to pick up sounds not only in front, but also behind! Dingoes also have equally strong jaws and teeth which close in a normal scissors bite. 'Bad Mouths' that  judges and breeders call deviations like teeth that are open or wry, are never seen in Dingoes. 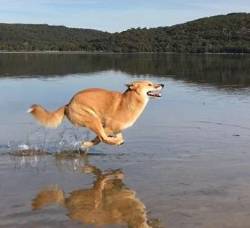 Behind the Dingo's shoulders is a long, narrow ribcage and a driving rear end. The natural flexion of the hindquarters' joints enables it to convert an usually moderate angled joint to be straightened or alternatively extremely bent. This enables the dog to not only to move in the double suspension gallop pictured, but also to leap, climb and dig. 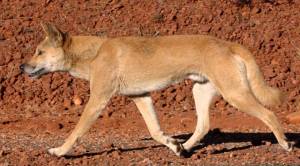 Times and attitudes are changing. After many scientific and practical studies, some land owners respect the Dingo's instinctive predatory behaviour to recognise that foxes, rabbits and feral cats do not belong here. After all, Dingos have been Australia's top predator for thousands of years!  Consequently, the Dingo instinctively kills these nuisance animal species, treating them like prey. Given time, let us hope that instead persecution, the use of the Dingos predatory behaviour will be its saviour!

Much of the material on this page kindly supplied by Lyn Watson, Dingo Discovery Centre https://dingofoundation.org/australian-dingo-foundation/

[2] Smith, B. 2015. Dingo intelligence: A dingo's brain is sharper than it's teeth. Pp. 215-249 in The dingo debate: Origins, behaviour and conservation, edited by B. Smith. CSIRO Publishing, Melbourne, VIC.