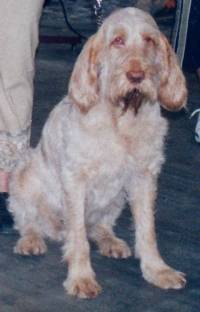 These two Italian breeds are ancient, they are recent additions to our Utility Gundog breeds. Today, the size and strength of the Spinone makes him a useful rough shooters dog to work in countryside where there are thorns and thick brambles. But the showy extended trot plus the high head carriage of the Bracco also makes him a flashy showdog which earns him great accolades against other breeds.

History of the Bracco Italiano

Usually considered as similar breeds that come in rough and smooth varieties, the Bracco Italiano and Italian Spinone are descended from smooth and rough coated Italian Hounds respectively.

A group of smooth haired Italian Hounds or "Segugio Italiano A Pelo Raso" are pictured here. Descendants of the primitive hounds of ancient Egypt, these dogs were used to hunt game. They landed in Italy when they were spread along the Mediterranean coast by Phoenician merchants. Numerous drawings of Egyptian Hounds resemble present day Italian Hounds. Dogs of the this type and stature are featured as ancient sculptures and paintings up to 1600 AD, proving they are obvious ancestors of the modern Bracco[4].

History of the Italian Spinone 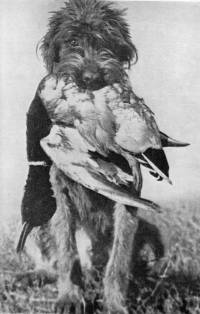 The rough haired variety of the Italian Hound was originally called the "Segugio Italiano A Pelo Forte", the name 'Spinone' being derived from the Italian word meaning 'prickly'.

"It is not easy to fix the (exact) place of origin of the Spinone Italiano, although the official Standard of the Italian Kennel Club has it that the breed is of Italian origin. There are those who would assign to it the same origin as that of the Bracco Italiano, but it would be more logical and more natural to presume that the Spinone has originated from the rough-coated Segugio, a dog which existed in the Middle Ages. Others assert that the Spinone originated in the Alps of Piedmont, just as did the Griffon and the Barbet".[1] 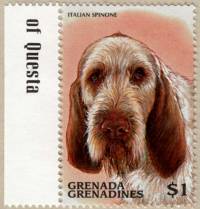 Paintings of Italian Pointers with wire coats back to the 1500's[2]. But by the mid-1800's two separate breeds had emerged in the Piedmont the area bordering France and Switzerland and Lombardy which is an adjacent area further south (around Milan). When one considers the Italian Hounds pictured above, it is easy to connect the relationship between the old Italian Hounds and Italian Pointers. As with the previous Utility Gundogs we have considered, these two Italian Pointing breeds were first used in conjunction with the net in the art of fowling. However, once guns were invented, they were developed into hunt, point and retrieve Gundogs. 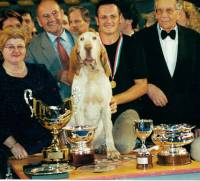 Usually considered as an Italian Hound that comes in rough and smooth varieties, both the Bracco Italiano and Italian Spinone were carefully resurrected after World War Two from the first standards written in 1897. Recent additions to the western world, the Spinone was introduced into Britain in the 1980's and the Bracco a decade later. The first Italian Spinone Show Champion was 'Gallowdyke Eric of Sundeala' qualifying in 1994. 'Eric' also won the first Crufts CC on offer after a successful puppy career. His parents were also big winners before CC's were granted[3]. In the year 2000 the Bracco pictured had won Best Exhibit in Show at the World Dog Show held in Italy, its country of development.

Comparison between the Bracco Italiano and the Italian Spinone

The obvious difference between these two breeds is their coat. But there are more subtle differences. Although these have been highlighted in bold, this entire chart gives a more complete comparison.