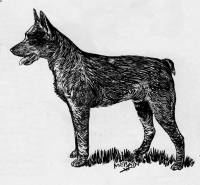 In northern New South Wales and southern Queensland, the stumpy-tailed dogs were preferred. Known as the Timmins' Biter found popularity in the more remote districts of north-west New South Wales and southern Queensland.  As a drovers' dogs, this breed had plenty of daylight under it and was a tireless worker of cattle on large holdings and long-distance droving in rough country. 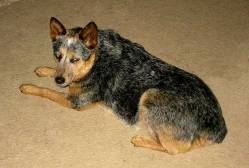 Because the Cur Dog was one of the types of dogs was used in developing the Australian Cattle dog, tailless or short tailed pups often occurred in early litters. In 1871, one of Thomas Hall's former competitors Jack Timmins bought some of these and selectively bred them to create a different strain of Cattle Dog that was even more courageous and could cope with semi-wild cattle on even larger holdings as well as travelling long distances in rough country.

These dogs became known as 'Timmins Biters. They assisted in the further opening up of Queensland.Their style of working is described as hard, unsophisticated and as uncompromising as the men that worked them. 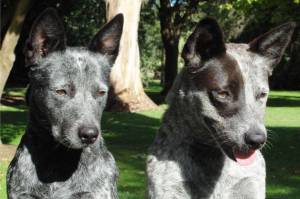 By the early 1900s road stock transport had became the preferred way of transporting cattle to market. These reduced demand for such hard dogs. Because Stock men in this region seemed to prefer the Stumpy Tail Cattle Dogs, Queensland created its own Breed Standard. Four dogs and three bitches were listed in the Queensland Board of Control's Stud Book in 1926. Around 1935 it was written:

...   the red bobtail known by drovers as Timmin's breed, the black bob-tail or old English cur-dog... all crossed with the dingo, have played their part in the production of a working dog peculiar to Australian conditions. The result, in general appearance, is that of a small thick-set dingo but with better expression. The polygot (sic) [mixture of] ancestry is responsible for all shades of red, blue and tan mottling, and a tail either like that of a dingo - not too long with plenty of brush - or as illustrated, a natural stump tail, reflecting the bob-tail influence for which the old Queensland Kennel Club framed a standard in 1918[3].

Another Breed Standard was written in 1938, stating that even red speckled markings were accepted on the head as were medium sized red spots on the body[7a]. 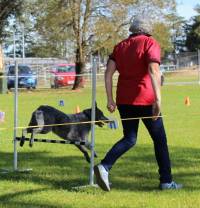 However, in the late 1960's the Queensland Control Council (Kennel Club) put a stop to this and de-registered all Stumpy Tail Cattle Dog breeders. One rebel breeder remained, Mrs Iris Heale who could not keep the breed alive single handed.

By 1988, the breed was facing extinction. Consequently, in 1989 the ANKC resurrected the Stumpy Tail Cattle Dog with a complicated 'Development Breeding Programme'[2a].

Because there were so few registered male stumpy Tails and possibly no registered bitches, a system was devised to identify various degrees of pure breeding that could be used for future breed development.

Each State had a panel of inspectors to grade dogs so they could be placed on the ANKC Development Register. There were 4 grades as follows:

Today, we have registered Stumpy Tail Cattle Dogs which, if not working cattle are such versatile dogs, they can compete admirably in modern day disciplines like Obedience and Agility Trials.