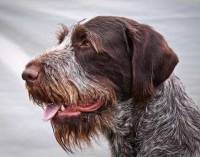 Although the German Wirehaired Pointer is considered here in detail, this chapter covers several other Wirehaired Utility Gundogs which work well both on land and in water. Selected 'through performance to type', they were developed as keen, working Gundogs which loved to track, search, point at any type of game, and were not gun shy.

History of the German Wirehaired Pointer 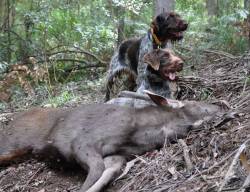 During the late 1800's interest in recreational hunting for a sportsman to hunt on foot, began to grow. Simultaneously there was improvement in the type of firearms that could be safely used in the field. Hence the increasing demand for an all-round sporting dog that was keen, steady to use under the gun and would also hunt wounded game both by foot-scent and air-scent.

In the first half of the 1900's the type of dog varied enormously. Hunting men were more interested in working their dogs than breeding for glamorous looks. Although breeders concentrated on sound construction, the emphasis was on working ability plus the indispensable characteristic of a wire coat.

To this end, in 1899 Germany set up an umbrella organisation for all Hunting Dog breed clubs in Germany. Called the Jagdgebrauchshundverband or (JGHV), it's purpose was to develop tests to determine the natural abilities of young hunting dogs. This organization was ruthless in selecting dogs which were suitable for breeding versatile hunting dogs that had the ability to handle any type of game. As the working ability of the dog was more important than it's looks, 'through Performance to Type'[6], under the JGHV umbrella several other wire-haired hunting breeds also developed. 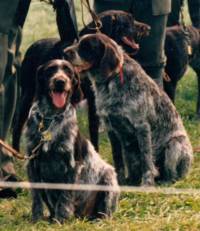 These are some other wire-haired hunting breeds that are now recognised:

Comparison between the German Shorthaired and Wirehaired Pointers

The obvious difference between these two breeds is their coat. However, at first glance in general balance German Shorthaired Pointers (GSP) may incorrectly be called square whereas the German Wirehaired Pointer allows up to 3 cms more length in the Breed Standard. Although the body of the GSP is proportionately shorter than some of the other Gundog breeds, his legs may appear just a little bit longer than his depth of body from withers to sternum as the accompanying photo demonstrates.