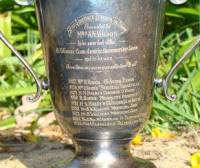 The next information we have about Airedales in WA is from 1927 until 1940 when a cup pictured below was awarded annually at the WA Kennel Club for the Best Airedale. The names on that cup make interesting reading. But apart from CH AERIAL ENSIGN owned by Mr Rodd who won it in 1927, there are few known names or prefixes. 'Aerial' of course was the prefix of Victoria's colourful Len Latchford.

Mr Rodd, whose name appears in 1928 and 1930 with dogs under the 'Meridong' prefix. Mr Rodd bred the bitch MERIDONG PANDORA from a son of the NSW import CH ILAN FLYAWAY. MERIDONG PANDORA  was mated in turn to CH MARYVALE WEST CHALLENGER a product of Neville Whiting's CH RENOWN MARQUIS and CH MARYVALE TIP TOP. Later he bought ROYAL OF RHODESIA a grand daughter of CH RENOWN MARQUIS on one side and CH ROBINA OF RHODESIA on the other. 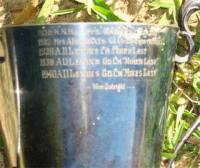 A 'Meridong' dog owned by a B Wallace won the cup in 1932 and 1933, H Haley won it in 1929. 1931, and 1936, and the cup was finally won three times in succession and hence outright by A. D. Lewin in 1940 with CH MIKES LAST. As Mr Rodd bred a dog documented as GRAND CHAMPION MERIDONG METAL MIKE, one can assume CH MIKES LAST was his son. However, it was obvious that Airedales were strong at that time, as the cup appears to have been hotly contested. It is now in the possession of Corrie Scull.

An old pedigree in Corrie Scull's possession reveals Mr Rodd whose name appears on the cup in 1928 and 1930, combined local prefixes of ILAN, TINTERN and UNIQUE. Mr Rodd also imported two Airedales from Victoria. The first was ROYAL OF RHODESIA, bred by 'Snowy Rhodes of Victoria, a daughter of Ch. MARQUIS OF RHODESIA. The second was bred by Neville Whiting CH MARYVALE WEST CHALLENGER, by CH RENOWN MARQUIS and CH MARYVALE TIP TOP. So Airedales have certainly been strong in WA during the mid 1900's.