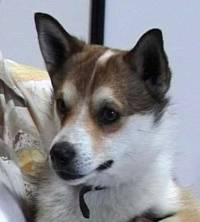 This section includes the Eurasier and the Canaan Dog which are recognised in Australia by the ANKC. But this section also features the fascinating Norwegian Lundehund which although is not ANKC recognised, deserves to be included in this section because of the specialised adaptation of its feet to enable it to work on the rocky snow-covered surfaces in the Northern Arctic region of Norway.

In post-war Germany (1960), Julius Wipfel began creating a companion dog for the people of Germany recovering from World War Two. He began by crossing the Chow Chow with the Keeshond (Wolfspitz), the result being called a 'Wolf-Chow'. Later he introduced the Samoyed. By 1979 the breed was renamed the Eurasier. But it took until 1994 to gain F.C.I recognition, and was introduced into Australia in 2000. 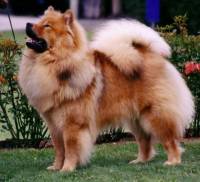 A medium sized Spitz breed, the Eurasier stands 52 - 56 cms (20.5 - 22ins) high and weighs 22 - 26 kg (48.5 - 57 lbs). He is slightly longer in body than height at withers with medium bone, and comes in any colour except white. He has a balanced, wedge-shaped head, dark eyes and medium sized pricked ears. He has a ground-covering stride with his tail carried forward over the back or bent slightly sideways.

Another small dog of Spitz type is the Norwegian Lundehund (FCI No 265). It weighs around seven kilos and has a dense double coat with with a soft undercoat which is reddish brown with white markings. They have an extremely supple build which enables them to enter and retreat backwards from the Puffins' confined underground spaces.

As pictured all four of the Lundehund's feet must have at least six toes, complete with corresponding pads, tendons and muscles so their feet can grip like a monkey's. Including the main central pad, there may be as many as eight pads on each paw. So the dog may appear somewhat cow-hocked because the back feet turn out to accommodate the extra toes. These peculiar feet give the dog incredible grasping abilities when working on the steep cliff faces of Norway's snow covered, rocky Arctic slopes.

History of the Lundehund 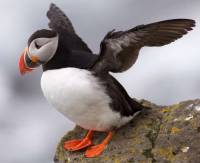 The Lundehund gets its name from the Norwegian word 'Lund' meaning Puffin - the name of the Arctic bird it was bred to hunt. For centuries, Puffin birds not only provided a staple diet for people living in these remote areas, their feathers and down provided essential warmth. Puffin birds are sociable creatures who live in colonies in long, winding cliff passages or rooks covered with snow and ice, so narrow it is impossible for a man to penetrate them.

The Lundehund's extra toes assisted the dog to climb up the cliff faces to reach the entrance of the Puffins' tunnels and the traction to aid the dog to crawl along it. Once the dog grabbed one bird, this bird would latch onto another Puffin bird which in turn would grab yet another. So it was not uncommon for a strong Lundehund to retreat, pulling out a long chain of a dozen or so linked birds.

The Canaan dog is a medium sized, square dog resembling the wild dog of the Pariah type. He is 50-60 cm (20 - 23.5 ins) high at the withers and weighs 18-25 kg (40-55 lbs). He typically comes in desert colours of sand, gold, red, cream but sand to red-brown, white, black, or spotted, or white markings with or without mask are permitted.

History of the Canaan Dog

Caanan Dogs are wild or Pariah Dogs, which today, still guard Arab villages in a harsh environment. Their name Caanan Dog was derived from ancient biblical times when the local dog was called a 'Kelev Kana'ni'. Developed as a pure breed by Professor Rudolphina Menzel who created the first Breed Standard, it was accepted by the Israel Kennel Club in 1953 where it was adopted as their National Breed[1]. But it would be 1997 before it was accepted by the FCI (FCI No 273), Australia following in 1998. 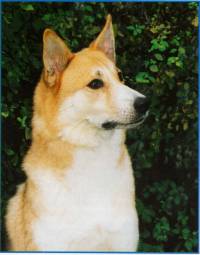 His head is of a medium length shaped like a blunt wedge, appearing broader due to low set ears. The skull somewhat flattened, the stop shallow but defined and the muzzle sturdy, and of moderate length and breadth and close with a normal scissors bite. The lips should be tight and the nose black. The almond shaped eyes are dark brown and slightly slanted with dark rims.The erect ears are relatively short and broad and set low. 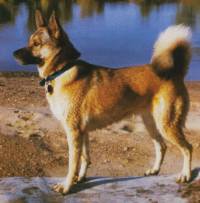 The limbs have moderate angulation and the body square with strong, round and catlike feet with hard pads. The tail is high set with a thick brush carried curled over the back. He moves with a quick, light but energetic trot. He has a double coat with a dense harsh and straight short to medium length outer coat and close and profuse undercoat.