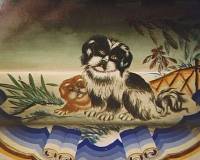 Among many pictures painted on the Summer Palace colonnade in Beijing (formerly Peking) is this pair of Asian Toy Spaniels, precursors of what we know today as the Pekingese. Some sources claim small dogs similar to these date back to when they were called 'sleeve dogs' decades BC before the development of the spirit lion-dog of Buddhism.

History of the Pekingese

Short mouthed dogs were recorded in China by Confucius, born in 551 BC. By the end of the first century A.D. Chinese books became a little more specific about these and other types of small dogs. For example, they spoke of the "Pai," a "short-legged" and "short-headed" type of dog, which "belonged under the tables" which were quite low. The Chinese used to sit on mats around these tables to eat their meals [2].

The Pekingese becomes a Pure Breed 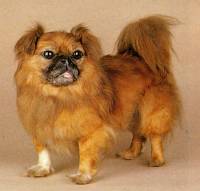 "Let its forelegs be bent, so it shall not desire to wander far, or leave the Imperial Precincts[1]"

History of Pekingese in Australia 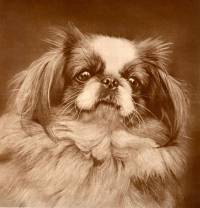 Records date back to a fawn and white English-bred dog named 'Yum Yum' who was brought to Australia in 1903 by Mrs Nellie Cox of Sydney and exhibited at Sydney Royal in 1904[3]. Our first Stud Book 'Tyzack's Annual' under the heading 'Spaniels (Pekingese)' records that three Pekingese were imported in Australia in 1907, and in 1910-1911 another couple, as well as several to Dr and Mrs Nisbet who established the Yangtse Kennels in Sydney[1]. 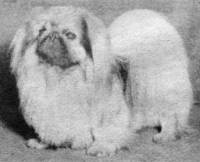 Pekingese has been enormously popular in Australia ever since and, unlike many other breeds, never lost popularity during World War Two with over 100 being entered in the Royal Melbourne Show in 1948. Then in 1957 Ch Ah Foo Chinkee owned by Rita Eathorne won Best Exhibit in Show at Melbourne, Adelaide and Brisbane Royals, all in one year!

It is interesting to observe how the interpretation of the Breed Standard has changed the appearance of the Pekingese over time so today it is one of the most glamorous of the Toy Breeds.

Today, the Pekingese is still a moderately thick set aloof little dog possessing great dignity, seemingly aware of his aristocratic past. When one compares the winning showdogs and puppies of the last century, they were not so far removed from the the Asian Toy Spaniel represented by "Lootie". But don't be deceived! Under the glamour of the modern coat with its modern grooming, responsible breeders have been rewarded with the absolute soundness. This can be observed from the accompanying photographs. The comparison of the Peke puppy of around 80 years ago compares favourably with those of today! With such seemingly sound front legs, one would also expect the body of the 1935 pup to be as sound as the promising modern puppy pictured moving on the left. 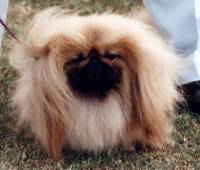 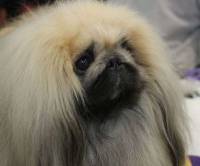 The head is fairly large with a flat skull, appearing to be wide between the ears rather than deep. His nose is shorter than that of his ancestors but his nostrils should still be large and open. A slight wrinkle, preferably broken, may extend from the cheeks to the bridge of the nose over his definite stop.

The muzzle is relatively short and wide with a well-defined chin which should not be obscured by the upper lips. The nose, eye rims and lips must be black and in many Pekingese this black marking extends to varying degrees over the whole face giving the impression of a mask. When the eyes are also round, dark and not too large, this completes the Pekingese's unique expression. 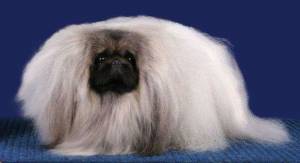 The body of the Pekingese is a lion-like build partly due to its relatively short body and distinct waist. His broad chest is slung past the elbows of his slightly bowed front legs, to accommodate the ribcage. His hindquarters are moderately lighter than his forequarters. His feet are large and flat, his high set tail with its long feathering and his slow gait with a typical roll in front, completes his dignified appearance.

With today's grooming products and techniques, the coat of the Pekingese has become his crowning glory. His double coat is moderately long and straight. Not extending beyond the shoulders, his mane forms a cape around his neck adding to his lion-like appearance. He also has feathering on his ears, the backs of his legs, and toes. He comes in all colours and colour combinations except liver or albino and typically should weigh just over 5 kilos or 11-12 pounds, unusually with bitches slightly heavier than dogs.