Almost two centuries ago, the Leonberger was first developed for his good looks rather than for a particular purpose. A large, elegant, reddish brown dog, he was supposedly bred to represent the form of a lion, a symbol for the town of Leon, in Germany. Today, his elegance and charming temperament makes him admired by dog enthusiasts world-wide.

History of the Leonberger 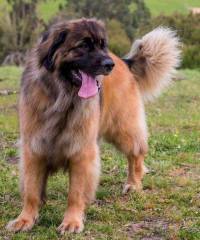 In 1846, before any Stud Books formally recording pedigrees of pure breed dogs existed, Mr Heinrich Essig, a town Councillor of the city of Leon in Germany, gave the name 'Leonberger' to pups born to a supposedly planned mating which began the dynasty. Without documenting or describing either the parents of the consequent litter, this alleged mating was between a Landseer (Newfoundland) bitch with a male Saint Bernard from the monastery hospice Grand St.Bernhard. He then supposedly mated a pup from this mating back to another Saint from the hospice. Then the Pyrenean Mountain Dog was supposedly thrown into the mix. The myth continued that he was creating a giant breed which could honour the name of his beloved city of Leonberg, which had a coat of arms with a lion-like aspect[1]. 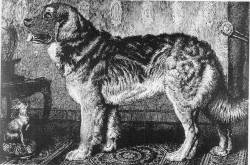 Promoted by Mr Essig as combining the excellent qualities of all the breeds from which the Leonbergers supposedly stemmed, they prospered. As large dogs were fashionable at that time, Mr Essig became an opportunist, and an excellent marketer. He advertised widely. With no written descriptions of the breed, he used the attached drawing as an illustration. His dogs were sold for huge sums of money to officials in Courts all over Europe, to the Imperial Palace of Japan, as well as to the United States and England. In 1865 Leonbergers were exhibited in Munich, Germany for the first time[2].

After Essig's death, the sceptics emerged! Leonbergers were denigrated to being called 'bastards', 'half-breds' and everything else that detracted from its pure breed status. This situation sounds similar to today's 'Designer' dogs! Below are two separate theories, each of which have merit. Both point to how the Leonberger became stabilized in such a relatively short time. These are:

1. Descendants from the Hospice of Saint Bernard 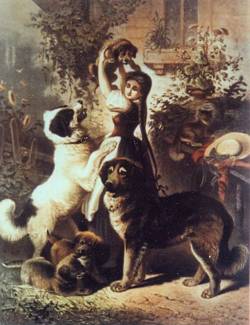 On November 25, 1878, thirty years after the Leonberger was supposedly created, Mr Herr von Scheideberg, the Editor of the German Sporting paper Der Hund wrote that it was his duty to denounce the Leonberger as a forgery. The reply from a Mr Charles Goas, a German gentleman residing in Manchester was:

'Twenty-five years ago, Mr Essig of Leonberg owned a pure bred St, Bernard dog and bitch of the same breed, which had been presented to him by the Superior of the Hospice of St. Bernard. About this time in an avalanche the whole breed perished in the fulfilment of their noble duty; and Mr Essig, not like a humbug (imposter) that Herr von Schheideberg chooses to call him, but as a thorough gentleman, restored the two mentioned animals to the Superior of the hospice. He therefore, is the man we have to thank that we have at the hospice still the original breed of St Bernard dogs. But before giving up the dogs, he made an experiment of crossing them with Newfoundlands not in a few years, but after a long time, succeeded in producing the present breed of Leonbergers'.[4]

2. Descendants from the Alpine Mastiff 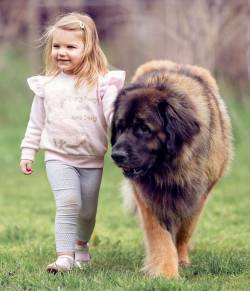 Another alternative is that Mr Essig gave a new name to an existing type of large reddish-brown dog known as an 'Alpine Mastiff'. In 1838, a decade before Essig in the same area of Germany, Heinrich called this dog a 'Löwenberg' with 'Löwen' meaning 'lion' and 'berg' meaning 'mountain'. This dog was also described by Schön in 1905 in his book 'the Signs that Characterise Dog Breeds'. He put forward the theory that the 'Alpine Mastiff', the oldest progenitor of dogs, was a Livestock Guardian Dog commonly employed in many of Europe's Alpine Regions[2].

As early settlers were originally nomadic, this could have also been fore-runner of a breed today called the Spanish Mastiff, which supposedly dates back to 100 AD and is also closely related to the Pyrenean Mountain Dog. The Spanish Mastiff is also uniform yellow, fawn or red which are dominant deer colours that blend into the terrain and the flock. There is also another ancient breed from near-by Portugal called the Estrela Mountain dog. This is also a Livestock Guardian Dog of yellow, fawn and grey in all ranges of these colours' intensity. This would explain why the colour of today's Leonberger bred true from the time Essig supposedly first 'created' it.

The Leonberger becomes a Pure Breed

In 1895, the International Leonberger Club was founded. That same year it's President, Albert Kull detailed the first written description of the Leonberger which is still the basis for all Leonberger Breed Standards to this day[1]! 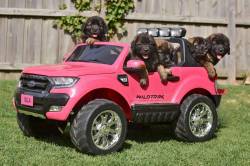 In 1901 a 'Leonberger Hunde Club' was set up in Apolda, followed by another in Heidelberg in 1908. But when World War One broke out, the breed took another blow as the numbers of dogs, including Leonbergers dropped dramatically. But in 1918 a few enthusiasts set up a new registration system which has been operating ever since. In 1922 a new Leonberger Club was formed which, besides keeping the Stud Book, by 1924 it began publishing a specialised magazine. Leonbergers prospered until World War Two broke out. When Germany lost this War, it took many enthusiastic promoters from the City of Leonberg to resurrect the breed. They set up an 'International Union for Leonbergers' and, to provide uniformity of breed type all over Europe, all Leonberger Clubs outside Germany were invited to attend Meetings to discuss the breed. Over the next 40 years, this enriched the gene pool and stabilised the Leongerger's traits[3]. 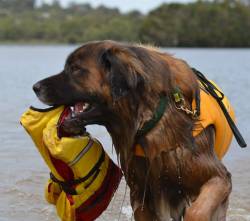 History of Leonbergers in Australia

A comparatively new arrival in Australia, the first Leonberger did not arrive here until 1989. A bitch, Beatrix Ave Lykesth was brought into Darwin from Norway by Alison Webb. After she was titled, Alison imported another from Norway plus one from UK. These three provided the foundation stock for the breed here[5]. Not only are they a striking looking dog, they are capable of taking part in the activities of carting and water work. The latter includes retrieving objects from above and below the surface of the water, as well as rescuing people.

Comparison between the Newfoundland, Saint Bernard and Leonberger