Dogs that caught rats have been an important part of our lives for the centuries. Before modern pesticides were invented, rats plagued the fields as well as the cities and ships. From the ratting dogs that sailed around the world killing rats on board, several different terriers developed in countries outside Britain.

The brown rat known throughout England, is about nine inches long, of a light brown colour mixed with tawny and ash, with its throat and belly a dirty white. Its feet are bald and its tail, similar in length to its body, is covered with minute scales, interspersed with short hairs. The brown rat is often found on the banks of rivers, ponds and ditches where it lives on frogs and small animals.

The rat also destroys rabbits, poultry, and young pigeons and infests grain stores, contaminating food such as corn and fruit of all kinds. If the rat's hunger is satisfied it carries these off to its den or hiding place. The rat is bold and fierce, and if pursued, will fasten on to its assailant inflicting wounds with its long, sharp teeth. Amazingly prolific, rats produce offspring of 12-18 offspring in a single litter[1].

Rat Pitting became a popular blood sport in the early 1800s. It usually took place beneath a pubs, hotels or inns. The rats would be supplied in 'lots' of a specific number. Betting would take place on which terrier could kill these in the shortest time.

The terrier's handler would wait until the rats settled in a heap at the outer edges of the pit with the stronger rats underneath and the weaker ones on the top. A clever, proficient terrier could kill the 100 rats in around 10 minutes. This spectator blood sport not only tested the ratting skills of particular terriers, it helped eliminate rats. 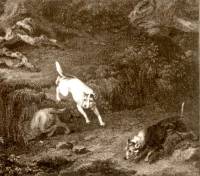 Terriers capable of catching rats could earn sufficient income to support an entire family. These ratting dogs had to be quick, agile and have very strong jaws so the rat was killed before the terrier himself got bitten. These rats were hunted in the following ways:

1. The rats in fields usually co-habited the 'setts' originally dug out by badgers, foxes or other animals. Catching them consisted of the hunter blocking off all escape routes except one. Then a terrier would enter that hole and bolt the rats towards the hunter who caught them often with his bare hands. He would then place as many live rats as possible in a bag, to be sold alive for rat pitting. 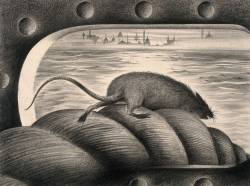 2. The growth of cities with open drains and no sanitation caused the rats to thrive. When this became a problem, a terrier man would be hired to rid a specific area of rats. The man would be paid for the number of rats he supplied to his employer. The live ones would be sold for  rat pitting.

3. Ratting dogs traversed the globe in the holds of the early trading ships and gave rise to the various pure breeds of terriers developed outside Great Britain, most of which bear the name of their country of development.