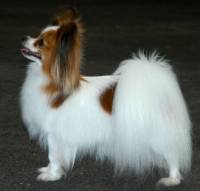 This Toy Spaniel was developed in Europe. The Papillon and Phalene are the two varieties of the Continental or European Toy Spaniel, differing only in their ear carriage. Historically the Phalene was the more common variety. But in our modern world, the pricked eared variety is more popular. In some countries they are exhibited at dog shows separately as two different breeds, whilst in other countries like Australia, they are exhibited as two varieties of the same breed.

History of the Papillon and Phalene 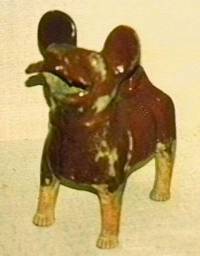 This Grave Statue pictured was found displayed in China. Its large ears demonstrate that there is definite evidence that dogs of China and Japan were introduced into Europe many centuries ago. Then the information in Pug History shows that dogs from China and Japan were traded through the East India Trading Company dating as far back as 1516 AD. These dogs were exchanged between countries and those of the near Far East through diplomatic missions and visits of royalty at the different courts[1]. The grave image pictured is evidence of this. 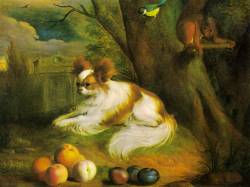 The European Toy Spaniel firstly had large dropped ears. It evolved as the Phalene in France and Spain and was called the Epagneul Nain or Dwarf Spaniel. The Phalene was the forerunner of European Toy Spaniels which were featured in numerous paintings from 1350 AD. Most dogs had dropped ears but this wonderful painting of around 1720 shows a prick eared dog which would later become known as the Papillon.

The Papillon was formerly named as a separate variety in Belgium in 1900. Both Papillons and Phalenes were accepted at Belgian shows in 1902 but did not appear in the English Stud Book until 1926. Then it did not distinguish between the two varieties[2].

History of Papillon and Phalene in Australia 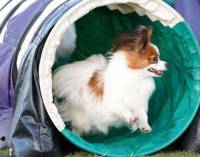 In 1949, Mrs Alice Jacobson (Victoria) imported the first Papillons into Australia. These were a a pair of red and whites named Corleon of Otter and Monamie Berenice. These two were followed by another pair, Jasper of Confryn a red and white, and Cresta of Harleymeads, a tricolour. By 1952 Bunteen Mimi (Corleon x Berenice) had become the first Australian-bred Champion. In 1954 the gift of a red/white bitch Bunteen Mei Mei to a Pekingese breeder Mrs Mina Thorn-Clarke established the Tres Chic prefix which has been active in NSW ever since[3]. 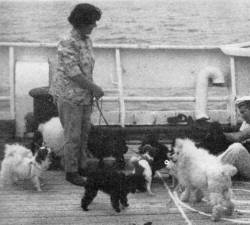 In 1963, Papillons were given a huge boost when Mrs Mollie Burton, of the Summercourt Kennels in Surrey, England immigrated to Australia. She is pictured here on board ship which was the only way people could travel from England to Australia at that time. She brought with her a selection of Toy Poodles and Papillons and imported another 7 Papillons in the next seven years before her untimely death in 1970[4]. From then on Papillons have enjoyed ever increasing popularity whether in action sports like Agility or just as an active but intelligent pet. 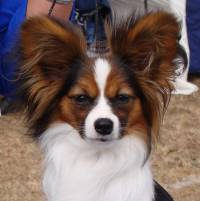 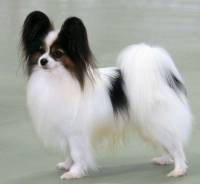 The Papillon is a dainty, balanced alert little dog. The skull is only slightly rounded with a definite stop and a fine muzzle about one third the length of the entire head. The body appears longer than square if the dog is properly furnished with ruff and hind fringes. The legs have fine bone with hare feet which have tufts of hair extending beyond the toes. 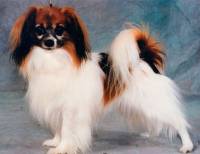 The coat is long, fine and flowing, without undercoat. The outline is completed by a high set tail arched over the back with fringes that fall to the side forming a plume. The Papillon is basically a white dog with patches of any colour except liver. The head markings should be symmetrical around a central narrow blaze which breed enthusiasts say should resemble the body of the butterfly. Certainly the mobile ears completes the impression which gives the breed its name.