'His Masters Voice' RecordThis is the true story of a re-homed dog named "Nipper" made famous by the "His Masters Voice" logo. This trademark became not only one of the ten most recognised brands of the 20th century, it also made its creator rich and famous. 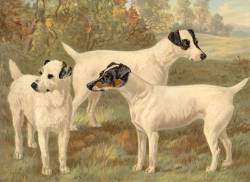 Nipper was born in Bristol, England in 1884. From his picture, he appears to be an Old English White Terrier which is now extinct. This type of dog was popular in the late 1800's and is behind many of today's pure breeds, including Fox Terriers.

Nipper was named because he had the habit of nipping not only at people's heels, but also at squirrels, rabbits pheasants and pigeons, in an attempt to catch them[1]. When Nipper's owner, Mark Barraud died in 1887, Nipper was inherited by Mark's brother Francis, who lived in Liverpool where he had a photographer's studio. Francis was also a painter and a member of the Royal Academy of Arts.

Francis also inherited Mark's wax cylinder phonograph and a few recordings of Mark's voice. Whenever Francis played a record of Mark's voice, he was amazed by Nipper's reaction. Nipper would sit in front of the horn spellbound. He would lick it, sniff it and listen to it delightedly, tilting his head and looking through the phonograph in a vain attempt to find his late master.

Moved by the dog's obvious devotion to Mark and his own artistic genius, Francis took a photo of Nipper in 1895 listening to his master's voice coming out of the phonograph. But in September that year Nipper died, aged eleven.

In memory of Nipper, Francis put the photograph onto canvas and painted over it with oil. He completed the painting in 1898 and registered it on 11th February 1899 as "Dog Looking at and Listening to a Phonograph". He then decided to change the name of the painting to "His Master's Voice". He attempted to exhibit it at the Royal Academy, but it was not accepted. It was also turned down by various magazines. They told him that nobody would know what the dog was doing.  Although he did not want to sell the painting, when he found himself in financial difficulties, he offered it to the Edison Bell Company (the inventors of the phonograph). But James E. Hough, the company's owner, said that dogs do not listen to phonographs. 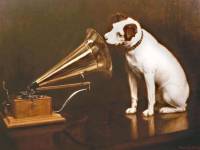 'His Masters Voice' with Gramophone

So, Francis left the painting standing in pride of place in his workshop. But he did not give up trying to sell it because he could see something almost magical in it. Until then, phonographs could make recordings whereas gramophones could not.

But in the summer of 1899, the "Gramophone and Typewriter Company" opened in 31 Maiden Lane, London. Francis visited this address, taking a photo of his painting with him. The manager, Barry Owen, asked Francis whether the picture was for sale. When Francis answered that it was, Barry asked whether their Gramophone could replace the wax cylinder phonograph in the picture. Francis answered that if they gave him a Gramophone to paint the image from, he could make the alteration. The sum of 100 pounds closed the deal on 4th October 1899. 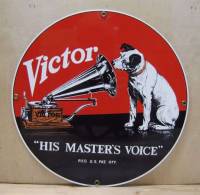 The resultant painting made its advertising debut in January 1900. On 16th July 1900 Emile Berliner, the inventor of the Gramophone, obtained the North American Rights and registered his company's famous logo. It showed the friendly little dog listening, spellbound, to a Gramophone with the slogan "His Master's Voice". This logo was later used by various brands, such as RCA RECORDS and RCA VICTOR and the painting became the property of the "Victor Talking Machine Company". All Victor records displayed Francis' painting of Nipper and the Gramophone. Also, from 1902 onwards, advertisements told record buyers to look for the dog.

By 1907, the "His Master's Voice" was used on their records by their British subsidiary. By 1910, after it had become clear what a huge success this image had become, the painting, the title and other rights were registered as trademarks.

The original painting was used 24 times when each new model of the gramophone was released. So, by the time Francis Barraud died in 1924, he had become a famous and highly reputable painter and photographer, and the image had claimed its rightful place as one of the ten most widely recognised brand names of the 20th century.