First documented in 1848, the Rough Coated Terrier' is the name Australians gave to small terriers that accompanied the British military deployed to supervise convicts sent to Hobart Town in Tasmania[2]. These small terriers' arrival preceded the First English Stud Book which had its beginnings in 1859. In the absence of any British name, Australians called this little dog the 'Rough Coated Terrier'.

History of the Rough Coated Terrier 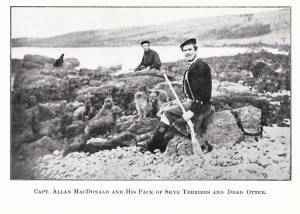 According to some letters among papers of Scotsman Captain Allan MacDonald of the 99th Regiment, in the 1840s, and 1850s, the Terriers he brought to Tasmania from Waternish were 'one of the the oldest and purest kennels in the highlands' on the Isle of Skye. These were the working 'short-haired Skye Terriers' from the MacDonald's estate of Waternish indigenous to the Isle of Skye. In the absence of any further information it is logical to assume that descendants of Captain McDonald's terriers from the Isle of Skye were those referred to as 'rough coated terriers' in the catalogues of Australia's First Dog Shows.

This rough coated terrier was extremely useful in early Australia, particularly in Tasmania (formerly called 'Van Dieman's Land'). Known as 'a big angry dog in a small frame' these little terriers were extremely alert, suspicious and highly territorial. They would tackle anything trespassing on its property. Early farms, especially if they were running domestic fowls, attracted Australia's small native marsupials that were looking for an easy meal. These small terriers also quickly killed snakes like tiger and copperheads very efficiently as well as indigenous marsupials like quoll which were attracted to the farms and vegetable crops. Sadly, the British treated these native indigenous species as vermin[6].

In 1862, when the first Australian Dog Show was held in Hobart Town in Tasmania, 29 Rough Coated Terriers were listed. It is also logical to assume these came to Hobart with the Military that were deployed from Scotland around that time. By 1864 in Melbourne, 25 more Rough Coated Terriers were listed (over 7 lbs) including the one pictured in the drawing on the right. This illustrates the type of working 'short-haired Skye Terrier' that came to Australia at that time.

The Working Terriers of Scotland 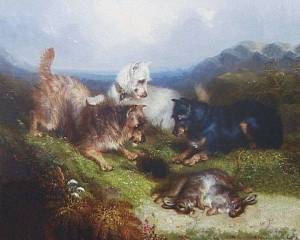 Meanwhile, in 1842, Queen Victoria was given one of these Terriers from the Isle of Skye, and took it back to England. Based on this dog, the English developed the type of the Skye Terrier that formed the basis of the Skye Terrier we see in our show rings today. By 1864, the coat has become exaggerated the dog became larger. The English recognised it as a Pure Breed. A Breed Standard was written and the Skye Terrier was listed in the First English Stud Book.

Simultaneously some of the original Skye Terriers that remained in Scotland were sold to Mr J Gordon Murray who founded the Skye Terrier Club of Scotland in 1876[1]. These retained their working abilities and were later recognised by in Scotland with a different Breed Standard to the one in England.

In 1887 the West Highland White Terrier became recognised as a pure breed. The Scottish Terrier was recognised following year in 1888. However the Cairn Terrier was not separately recognised until 1924. That meant that, in addition to the Skye there were clear distinctions between all the Terrier breeds of Scotland.

Development of the Rough Coated Terrier in Australia 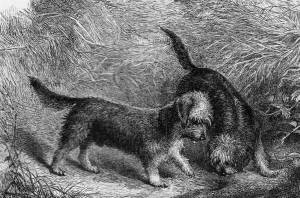 Meanwhile, during the 1890s the Australian Terrier breeds were are also developing their own individual traits described. These were influenced by breeds recognised in England at that time: These were:

That is why it was reported here in March 1896 that: 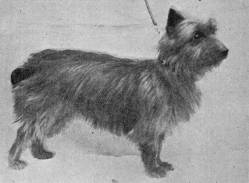 There is always some difficulty in deciding the awards for the popular small terrier which some people call the Australian Terrier which is, in reality neither Scotch, Skye or Yorkie but a well-regulated mixture of these breeds eminently suitable for Australian climates and work.

Of these there are two distinct kinds, one more suitable for country and field work, while the other is specially adapted to become the pet of the children of the household.

Furthermore, this report went on to say:

These are differentiated particularly by their coats, which the former is required to be wire-haired, or broken haired i.e very coarse and thick, while in the case of the household pet, it is better to be silky and soft to touch, and above all, easy to be thoroughly washed and dried'[3].

A word Picture of the Rough Coated Terrier 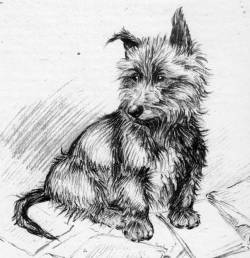 In July, 1896 the rough-coated Terrier was described as being  to required to be

The Complete Description of the Rough Coated Terrier

In July 1896, the full description of the points summarised above is published. Called the Breed Standard within the document, as it was not approved by any Kennel Club in Australia, we present it as originally published:

"I have been asked to publish the Standard for the Australian Rough Coated Terriers which are a very popular breed here and are classified variously as Rough Coated or Broken Haired at different shows. It should be from 5 - 15 pounds in weight. It should have a long head with a large but fairly flat skull, strong and powerful jaws with a normal scissors bite. There should be a crown of silvery hair between the ears extending down the centre of the skull to the eyes. But this hair must not be as long as the Yorkshire Terrier not should it extend down the muzzle. The eyes should be small and piercing, set rather wide apart, not hidden by long hair and be of a dark colour. Pricked ears are preferable.

The body should be about ⅓  longer than the height at shoulder with a level topline. The legs should be rather short, perfectly straight and muscular, have a fair amount of bone with small catlike feet.  The tail should be set on nearly level with the back, free from feathering and docked to about 3". The coat must be hard, straight and wiry to touch, very close and abundant and on no account be soft and silky or have a tendency to curl or wave.

The colours are blue, blue and tan, sandy, grizzle and black or red, free of white markings. The sandy or blue and tan are preferred, the latter should have the colour well defined with the body a dark steel blue, with rich mahogany tan on the muzzle, legs and feet and around the vent. The sandy should be a rich yellowish red all over, with a silver crown".[3b]