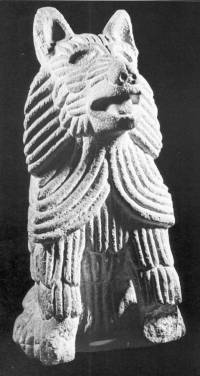 Around 3,000 BC when humans began to live in somewhat permanent dwellings instead of being nomadic, the role of dogs as companions evolved. This appears to have happened simultaneously throughout the world in several cradles of early civilizations. Certainly the first documented companion dogs came from China and Tibet. But as other countries developed their own cultures, sea trading meant that companion dogs spread further afield. 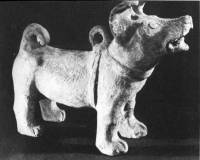 The ancient Chinese Sacred Books of Fo-Hi were written about 3,468 BC. Around 1840 AD, these books were translated by a Frenchman named Pauthier. According to this translation, Fo-Hi founded the historical Chinese Empire and was its first Supreme Ruler and God-Emperor. Additionally, according to Pauthier's translation, Fo-Hi encouraged the breeding of little 'sleeve dogs'. Later it was recorded that Tai-Kang, the Third Ruler of the Chinese Empire from 2188 - 2160 BC was also a great dog lover[5]. Certainly the development of the 'spirit lion-dog' dates back as far as 500 AD, when dogs associated with Buddhism in the Chinese temples and were favourite pets of the Emperors.

In Central America dating back to 2,500 BC we have record of two types of dogs. One was a medium sized Aztec dog somewhat like a wolf which was reared for food and ritual sacrificial purposes. Interestingly, the other was a small dog with a globular shaped head that appeared to be kept as a companion, probably the predecessor of the modern Chihuahua[5]. When the first civilizations in Central and North America developed in about 1200 BC in the coastal regions of the southern part of the Gulf of Mexico[1] we have America's first companion dogs.

Archaeological evidence in ancient Mexican tombs proves that, during the Toltec period 900 - 1200 AD, a small hairless dog lived there representing unselfish love. It was believed that, when the dog was buried in the same grave as his master, the spirit of the dog could take take its master to another world, where it could testify in favour of its master, accounting for all his good and evil deeds. By around 1,400 AD when the Aztecs succeeded the Toltecs, these same hairless dogs were thought to have medicinal properties, giving relief from asthma and other aches and pains[6]. 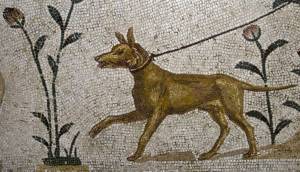 Meanwhile in Europe trading of companion dogs by barter seemed to evolve from 2,000 BC. By this time townships had sprang up around the bays and inlets of the rugged coastal regions like Greece. In both Greek and Roman history the dog was highly esteemed. For example in Greece around 500 BC Pythagoras taught that there was no animal that could perpetuate the virtues of intelligence and wisdom better than the dog. He taught that when a person died, their the soul entered different animals. But when Pythagoras' favourite disciples died, a dog would be held towards the dying man's mouth in order to receive its spirit[2]. Another example in Greece was when Alexander the Great (circa 300 BC) built a whole city in honour of the dog[2]. Meanwhile in Italy around 100 AD the Emperor of Hadrian decreed a prayer of the most solemn rites over the tomb of a dog on account of his intelligence and wisdom[2].

This gave the impetus for the fame of companion dogs to spread. For example, one Greek geographical centre was the small island of Melitae (later known as Malta). Here a small white companion dog existed possibly originally as a ratter. But as sea trade by barter for honey and other supplies and necessities spread across the Mediterranean, this small white dog travelled to Tenerife in the the Canary Islands, where became known as the Bichon Frise. Then it was traded in Havana and Madagascar which developed the Havanese and Coton de Tulear respectively.

Additionally a small spaniel that was originally a hunter, could have spread through Europe with nomadic tribes. In this way, as the centuries rolled by, small companion dogs would have no doubt also made their way to West to Britain, as well as East to Peking (now Beijing) in Asia.

In 1570, Dr. Johannes Caius called this Toy Spaniel the Spaniel Gentle or Comforter in his classification that was written in Latin and translated into English by A Fleming in 1576[4]. The original translation of this important work is in my opinion too difficult to read to be printed in its original form. So it appears here as my interpretation in modern English: 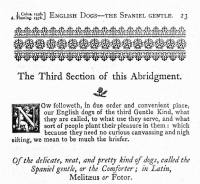 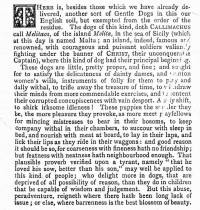 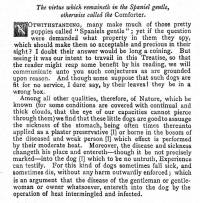 Now follows our English dogs of the Gentle Kind. Because of the use they serve, and what sort of people take pleasure in them, this section is much briefer.

There is another sort of Gentle Dogs in England that are exempted from the previous classifications. The dogs of this kind come from the island Melita, in the sea of Sicily (which at this day is named Malta) where this kind of dog had their principal beginning.

These dogs are little, pretty, and fine. They are sought to satisfy the delicateness of dainty dames, and wanton women's wiles, instruments of folly for them to play and dally with, to trifle away the treasure of time, to withdraw their minds from more commendable exercises, and to content and gratify their corrupted senses in a vain attempt to amuse themselves. A sly shift to shirk irksome idleness!

The smaller these puppies are, the more pleasure they provide. Flirting mistresses hold them in their arms, keep company in their chambers, sleep in their beds, are nourished with meat, lay in their laps, and lick their faces as they ride in their wagons. For good reason it is so. For that plausible proverb said of a tyrant,"he loved his sow, better than his son" may well be applied to this kind of person. He who delights more in dogs which are lacking all possibility of reason, than they do in children that are capable of wisdom and judgement is abuse unless there has been an issue of barrenness.

But many people make much of those pretty puppies called Spaniels Gentle. If the question was asked why they are so acceptable and precious, the answer would not be long in coming. But seeing it was our intent that the reader should reap some benefit by this, here is the service for which these dogs are fit.

Among all other qualities of Nature, which are known we find that these little dogs are good to assuage the sickness of the stomach, being often times thereunto applied as a plaster preservative [!] or borne in the bosom of the diseased and weak person [!] which effect is performed by their moderate heat. Moreover, the disease and sickness changes place and enters into the dog [!] which is the truth as experience can testify. For this kind of dog sometimes falls sick, and sometimes dies, without any harm being outwardly enforced. The argument is that the disease of the gentleman or gentlewoman or owner entered into the dog by the operation of heat intermingled with the infection. 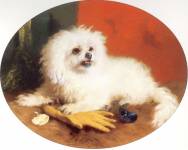 [2] William Youatt 'The Dog' published 1848 London Charles Knight Fleet Street (under the Superintendence of the Society for the Diffusion of Useful Knowledge.) Chapter 1 Page 4

[4] Dr John Caius, "Of Englishe Dogges: The Diuersities, the Names, the Natures, and the Properties", London, 1576, translated into English by Abraham Fleming,. Pages 23-25. The work was originally published in Latin in 1570 as "Johannes Caius, De Canibus Britannicis".