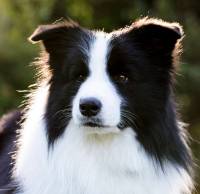 Although 'Border' in the name 'Border Collie' refers to his ancestors in Scotland and the region that borders England, this pure breed developed in New Zealand and Australia. Certainly various types of Collies would have accompanied people who worked as shepherds before they emigrated to Australasia. Once here, by the early 1900's when the sheep industry was developing, the success of imported Border Collies in Sheep Dog Trials as well as working on farms, made them famous.

History of The Border Collie

By 1907 the Australian Kelpie was already recognised as a pure breed. They worked mobs of sheep in the hot dry conditions of the Australian outback. But when sheepdogs from Britain arrived here, they not were only successful in Sheep Dog Trials, on a day-to-day basis this dog worked expertly with smaller numbers of sheep confined to cleared, hilly land which was grassed.

But what really made the Border Collie famous in this part of the world was the popular Sheep Dog Trials held in the early 1900's. Often, 'the best looking dog' was judged at these Trials. As scores of Collies were imported to compete in Trials, the New Zealand Kennel Club and North Island Sheep Dog Trial Association adopted a 'Standard of the New Zealand Working Collie' in 1927[3]. Interestingly the males were allowed to be 27 inches high and weigh 60 pounds! Additionally, although it stated that the coat colour was immaterial, it mentions merle colour of eyes as being allowable and that this 'Working Collie' could be either smooth or rough coated. 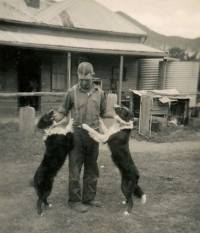 In Australia, the first imported sheep dogs of Border Collie type were trialled in the 1902 Sydney Sheep Dog Trials[2]. By the 1920's the genius of these dogs had become legendary. Blowflies are an annoying menace in Australia especially around camp fires where many stories were told. Some men boasted about the supposed ability of their Border Collie to herd blowflies into a whiskey bottle! With flies first attracted to a rabbit skin, the Border Collie was instructed to herd them into a bottle which was then corked. Bets were taken on whose Border Collie could herd the most number of flies into the bottle in a given time[6]! Needless to say such extraordinary yarns cemented the fame of the Border Collie in Australia. 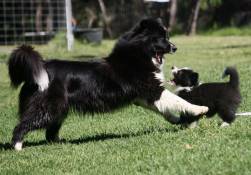 Because Australia did not have a co-ordinated Stud Book until 1988, each State did their own registrations. In Victoria by 1927, a Registry of pedigrees of Border Collies was set up under the banner of the Victorian Working Sheepdog Association. This was ground-breaking as the concept of 'prefixes' was introduced whereby every puppy must carry the prefix of the breeder who whelped it[4]. 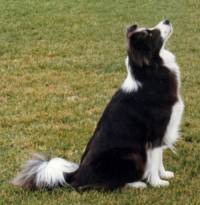 The 1950 Breed Standard, written in Victoria and published by the KCC describe some breed characteristics which remain hallmarks of the Border Collie. For example the double coat with an abundant mane, the broad but flat skull with a pronounced stop, the eyes set well apart, the preference for semi-prick ears and the moderately long tail with its slight upward swirl. But in the original Breed Standard the size was 20 - 22 inches, and the admissible colours were only black, black and white, and the tricolour of black tan and white. A black body was preferred because a dog with too much white on its body could easily be seen by the stockman working it, especially from a distance. This is particularly the case in Queensland where the ground and the sheep can become so covered in red dust, a red coloured dog almost disappears![7]

Despite this, by 1988 more colours had been added, the size changed and the characteristic movement was described as 'free, smooth, tireless and with great stealth'. 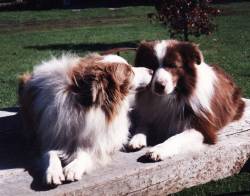 Today the Border Collie stands 46-51 cm (approx. 18-21 ins) at withers and comes in a variety of colours but white should never predominate. He has a graceful, smooth outline and, without being coarse or weedy, has sufficient substance to endure long periods of active duty as a working sheep dog with his characteristic gait of stealth. 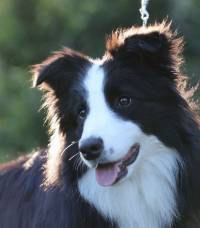 As stated above the skull is broad and flat between the ears with a pronounced stop. The muzzle is the same length as the skull and has clean, tight lips. The nose is large with open nostrils and should be a solid colour complementing the background colour of the dog.The oval wide-set eyes also harmonise with the colour of the coat although a darker colour is preferred. But in chocolates a lighter colour is permissible and blue eyes are seen in merles. The ears should be of medium size and texture, set well apart, carried erect or semi-erect. 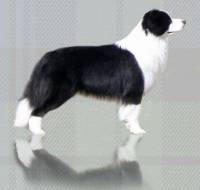 The neck is of good length without throatiness and the shoulders are long, and well angulated. The forelegs are well boned and straight but the pasterns show flexibility by having a slight slope when viewed from the side. The feet are oval in shape and the pads deep, strong and sound. 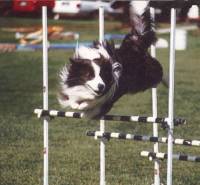 The body is longer than height at withers with well sprung ribs tapering to a fairly deep and moderately broad chest. The loins are broad, deep, muscular and only slightly arched. In profile the broad, muscular hindquarters complete the topline as it slopes gracefully to the set on of tail. The thighs are long and  broad with well turned stifles. The hocks are short, straight and parallel when viewed from the rear. The tail is moderately long, set on low, well furnished and with an upward swirl towards the end. This completes the dog's graceful contour. The Border Collie has a weather resisting double coat, with a moderately long or smooth, dense, topcoat and a short undercoat. There is an abundant mane, breeching and brush. On face, ear tips, fore and hind legs the hair is short and smooth.

Movement and 'Stealth' in the Border Collie

Movement is an extremely important characteristic of the Border Collie. It is described as 'free, smooth, tireless, with a minimum lift of feet, conveying the impression of the ability to move with great stealth'. The trot when viewed from the front should be be smooth, straight and true, without weakness at shoulders, elbows or pasterns. Viewed from behind there is great drive with strength and flexibility, with hocks neither close nor too far apart. When the dog comes to rest, it should stand four square.

Border Collie having 'given the eye'

But 'stealth' is never seen in the show ring because it requires the dog's focus to be on the animals it is shepherding. At first the dog 'gives eye' or stares at the livestock, challenging them to move in a given direction.

Once the animals begin to move, the dog follows with a slow, crouching movement called 'stealth' which causes the livestock to continue down the desired path. The smooth coated Border Collie pictured is a working sheepdog rather than a show dog, but is a pure breed dog because it is registered with one of the Working Sheepdog Associations that is recognized in turn by the ANKC.

[4] 'The History of Purebred Dogs in Australia' published by OzDog Newspaper 1997, The Border Collie by Mrs Joyce Sullivan, Page 55