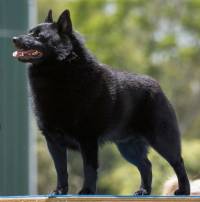 The Schipperke is a small, bouncy Belgium Spitz breed which is typified by his silhouette. Usually black and frequently born with a natural bob-tail, he has a unique outline. This is created by his dense coat which includes a thick mane, frill around his neck and good culottes at the back of his thighs. An ideal house and guard dog, the inquisitive, alert nature of the Schipperke ensures he always barks when strange noises are heard. He is also an excellent ratter and vermin killer and extremely hardy. Comparatively free from inherited diseases, he usually enjoys a long life.

History of the Schipperke

The Schipperke is claimed by the Flemish people to be Belgium in origin. The Flemish were Dutch speaking Belgiums who lived near Holland to the North of Belgium. Most people believe the name Schipperke (pronounced skipper-key) is derived from the Flemish words meaning 'little captain' and the suffix 'ke' meaning diminutive. This is because he belonged to canal boatsmen who operated barges between Brussels (Belgium) and Antwerp (bordering Holland). Alternatively the Schipperke could have derived its name from the word 'Scheper', meaning 'little Shepherd Dog' in the Flanders dialect[1]. 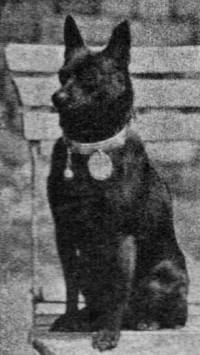 ... the shoemakers in the St Géry quarter organised a competitive exhibition of Schipperke on designated Sundays on the 'Grand Place' in Brussels. At this time, workmen displayed their ingenuity by making collars of hammered or carved brass for their Schipperke. 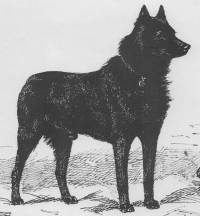 Schipperkes 1895Always kept gleaming, these collars were only worn on Sundays and were fastened in a manner to pull out as few hairs as possible from their ruff. During the decade of 1830 - 1840, the Schipperke  became so fashionable in Brussels, it was  protected by the disciples of Saint Crispin. Even in this later period, it was the custom to adorn Schipperke with an enormous collar of worked brass, which was often a work of real art. On Sundays one could see a shoemaker going out without his wife or even his children but never without his Schipperke[2].

The Schipperke becomes a Pure Breed in Europe 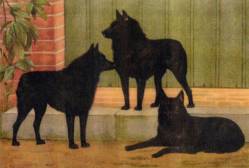 By 1880, the President of the Society of Saint Hubert became keen to give him a special class of its own[3]. Between 1882 and 1885, 10 dogs called Schipperke are recorded in show results in a continental Stud Book of dogs with the name of each dog, its owner, parents if applicable and their birth dates[3a].

In 1885 a painting of a Flemish Fair which clearly depicts a a small black terrier-type short tailed dog with a rat in its mouth, was also discovered[3b]. So they were described as 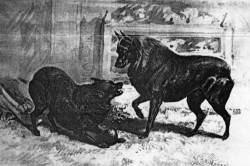 '... a straight haired Terrier of a Flemish race, with erect ears and without a tail' [3c] .

Also in 1885, the writings and drawings of Loius Vander Snickt in 'Chasse et Péche' (Journal of Hunting and Fishing - the official publication of the Royal Society of St Hubert) records the very early development of the Schipperke as a pure breed. He describes them as

'... a little black devil, but without forked feet and without a tail, such is the dog of the boatmen. The true demon of rats, mice and moles and everything that stirs.... they do not dirty the bridge and do not knock objects down by their tail, since they do not have one'[3d].

The Schipperke becomes a Pure Breed in the UK 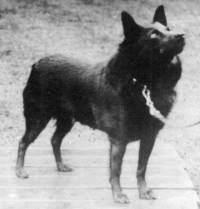 By 1887, the first Schipperke had arrived in England. As there were no separate classes for Schipperke at that time, they were exhibited in classes for 'Foreign Breeds'. Then there was the issue of how the Schipperke should be classified. Because of his ratting abilities, the Flemish fanciers thought he should be called a 'Flemish Terrier'. Others thought that, because he was probably a miniaturised Sheepdog and appeared in classes of 'Toy or Schipperke', he should be classified as a 'Toy'. But the Standard of Points drawn up by Brussels in 1893 described his weight as 'about 12 pounds'. This meant he was hardly a 'Toy'! And he was not really a 'Terrier' either! So the classification of 'Non-sporting' seemed to be the best solution[1a]. 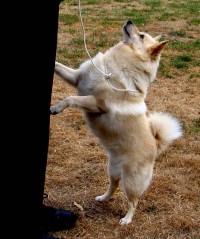 But the two other issues that needed to be resolved still occur across the world today. The first was whether to accept colours other than black which occasionally occur. These were finally accepted in UK and still are today[1b].

The second was the issue of humanly docking pups which were not born with a natural bob-tail. This is even more of an issue today with some counties totally banning the docking of dogs' tails. But in pre-World War One England, three separate British Schipperke Clubs were formed to safeguard the breed's future in UK. With the practice of docking then permitted, the Schipperke survived both World Wars so it can be enjoyed by all its followers today[1c].

History of Schipperke in Australia 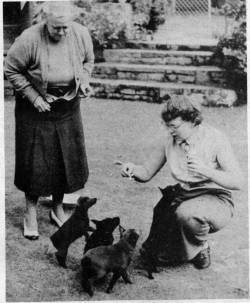 Lady Coles with her Schipperkes

In 1951, Lady Greta Coles introduced the Schipperke into Victoria, Australia. From the UK she imported a dog and bitch, Ch Classic of Winjones and Penelope of Spenwood with which she founded her 'Rhondda' Kennel. In 1956 she imported another dog and bitch. Most Australian kennels go back to these original imports[4].

By 1988, another 24 imports owned by various people had joined the original four, creating a solid ground on which to base our Australian Schipperkes. These included another 11 from UK, 3 from USA and 10 from NZ[4a].

But it was Lady Greta Coles herself who was the driving force behind the successful establishment of Schipperkes in Australia. She was the wife of one of our earliest famous entrepreneurs, Sir George (G J) Coles who founded the 'Coles' shopping chain which is still in existence today. But Lady Coles was always dedicated to her little Schipperkes. She even travelled with them in a van because her husband Sir George would not allow the Schipperkes to travel in his Rolls Royce! Although she gave up breeding in the early 1960's, until her death in 1983, she attended every Royal Melbourne Show where she donated her trophy to the Best of Breed[4]. 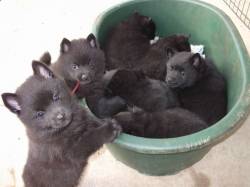 Certain requirements of the Shipperke vary around the world. As this is an Australian website, this word description is based on the ANKC (Australian) Breed Standard. 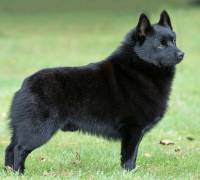 The Schipperke is a small cobby active dog, with sharp foxy expression. While he is usually black, in Australia other whole colours are permissible. He weighs around 5.5-7.5 kgs (12-16 lbs).

His most unusual distinguishing feature, especially for a Spitz breed, is his tail. He may be born tailless with no discernible tail. A full length tail is also permitted which should be well covered with hair, tightly curled and carried over the back. A fully coated partial length tail permissible but not desirable. 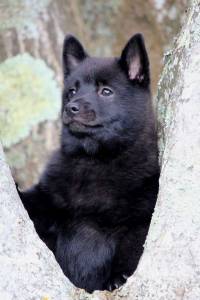 His fairly broad, flat skull not round, and ends with a small stop. The fine muzzle is not week, but moderate in length and well filled up under eyes. The small nose is black, even in whole coloured dog which are not black. The bright eyes are dark brown, more oval than round but not full. The ears are of moderate length, not too broad at base, and taper to a point. They are carried so stiffly erect, they cannot be bent other than length ways. He has a normal scissors bite. 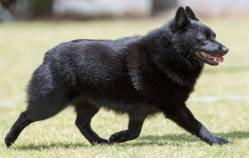 His strong neck is rather short and slightly arched. His muscular shoulders slope across his broad ribcage. His chest is deep in brisket, and his perfectly straight legs are set well under his body. The bone in his legs is in proportion to his body so the dog stands well up on the toes of his small cat-like feet. His back short, straight and strong. Although his loin is powerful, because of his mane, his hindquarters can appear to be lighter than his forequarters. But he does have muscular, well-developed thighs and a decidedly rounded rump. His hind legs are strong, muscular, and his hocks are well let down.

He moves with a short, brisk stride, but true and balanced fore and aft. Although his dense and harsh coat is smooth on head, ears and legs, it lies close on back and side. But it is particularly thick around neck where it forms a mane and frill and also particularly thick on the back of thighs.where it forms good culottes. He usually comes in black but other whole colours are permissible.

Size, Colour and Tail Descriptions around the World

The following table has been constructed because of the variation in the requirements of the different Schipperke Breed Standards around the world.

This comparison table is aimed at helping assists enthusiasts, breeders and judges alike to understand the requirements of these different organisations responsible for the Schipperke's most defining characteristics.

[2] Vella M Root, 'The Official Book of the Schipperke' Published by Howell Book House N Y 10022, on behalf of the Schipperke Club of America Inc, 1965 Library of Congress Catalog Card Number 65-13262 'The Origin and Early History of the Breed in Belgium' Page 12