Other Airedale Breeders Outside Victoria 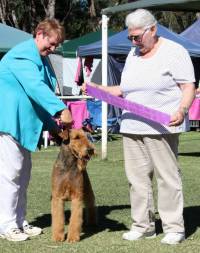 This section includes all the information I have so far to hand on people involved who reside outside Victoria.

This section also includes a few names, but is far from complete.

Mrs Hills of Sandhills Kennels bought 2 daughters of the Victorian import Ch Kresent Admiral. These were Exmoor Exdale and Moylarg Michelle which were bred with some success in the early 1960's. These included Mr D Parry's SANDHILLS CONTESSA. Mrs Hills was the inaugural Treasurer of the Airedale Association of NSW. 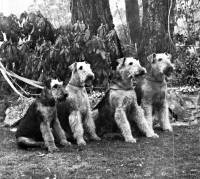 Mrs Jessie Woodburn of Gundowringa Kennels imported Ch Prenton Attlia (imp UK) pictured on the extreme RHS, MR. SMITH OF BURDALE (imp UK) second from the RHS plus a bitch who is not in the group, JOY OF BURDALE (imp UK). The two bitches in the photo below are GUNDOWRINGA HOT SAUCE (on the LHS) and Ch BURFIELD MINOR MIRACLE.

The very successful Strongfort Kennels, formerly from Melbourne was an integral part of the Airedale scene in NSW the 1980's and 1990's. By following the link, you can see all the information I have so far to hand. 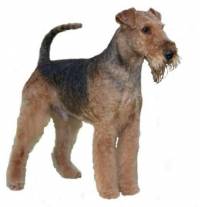 Sue Jolly (pictured above) is has been involved in Airedales in NSW since 1988. She began with a Sophaire bitch bred from Strongfort and Bushveldt lines. In the following years she has shown Airedales under the Lufttal prefix until she obtained a Belltirna Airedale from Ken Campbell 'Belltirna Believeitornot' who became the first Supreme and Neuter titled Airedale Champion. She then imported American Grand Champion Stirling Wildside Eclipse from USA who appears at the top of this page. He is a beautiful Airedale with lots to offer the breed in overall type, size and general balance. Yes, that's me in the picture as it was my pleasure to award him Runner-up in Group from a strong line-up of quality Terriers whilst judging in NSW in 2016. Sue is still actively breeding but now under The prefix Belltirna which Ken Cambell  prefix which he transferred to Sue.