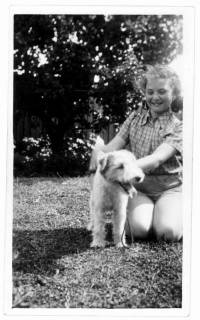 Aged 10 with my first dog,'Spinky'

Growing up during World War Two, I was given a Fox Terrier (Wire) for my 10th birthday. I then learned to groom her and my introduction to the world of dog showing began. This involved learning to hand strip. So in early 20s, I travelled overseas to further my grooming expertise. In Paris received a grooming recommendation from the world famous Monsieur Marcel. I also worked grooming dogs in London at a then famous grooming salon. This included grooming Princess Margaret's Sealyham.

My Lifetime Passion for Dogs is Sparked 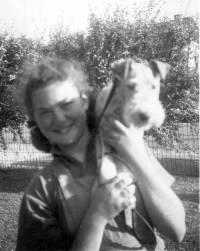 In 1938, the year before World War Two broke out, I was born at the humongous weight of 12 pounds (around 5 Kilos). So my lonely childhood trapped by overweight began. Too fat to join in games with other children, my mother was so depressed and pre-occupied worrying about the safety of my father who was in New Guinea fighting the Japanese, I was left to my own devices. The only reliable friend I could find was the Mini Foxie 'Spot' who lived down the road with his welcoming owner. Spot and I played incessantly. He taught me what a difference the love of a little dog could make. This sparked my lifetime passion for dogs. 'Mini Foxies' are today known as the pure breed 'Tenterfield Terriers'. 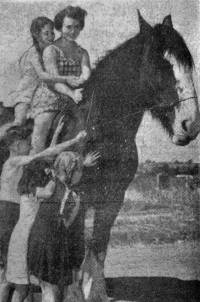 With neighbourhood children and the stray horse

Amongst the numerous animals I then brought home was a draft horse! In those days milk was home delivered and this wonderfully placid Clydesdale that had escaped from the local dairy. He certainly knew the rounds, especially those streets with lush green lawns! I found him not far from where we lived and grabbed a piece of rope and brought him home. Over the next couple of weeks, this horse obliterated our beautifully manicured suburban front lawn and rose garden before he was finally claimed. At last I became popular with the neighbourhood children as we all rode 'Boidie' around the streets where he was used to pull the cart for the milkman. After 'Boidie' was claimed, my life in dogs began. 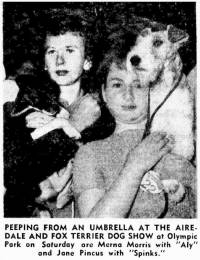 We had never owned a pet of any description. But my parents finally decided the purchase of a dog would put an end to making our home the local animal welfare shelter! As I especially loved 'Spot', thinking she was a Mini Foxie my parents purchased a Wire Fox Terrier who I named 'Spinky'.

Although I was only ten years old in 1948, my parents joined me up with the Kennel Control Council in my own right. Motivated by receiving the 'KCC Gazette', when Spinky was just over one year old, I began showing her. At one of our first dog shows, 'Spinky' and I caught the eye of a 'Sun' photographer, hence the accompanying (now very tattered) photograph. 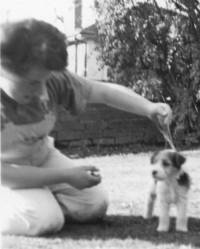 'Spinky' gave me the experience of breeding. In 1950 I watched my first litter being  born on Feb 18th. There was 2 boys and 2 girls. The May 1st KCC Gazette, 1950 shows their registration. They were sired by a dog called Ch Seivad Defiant owned by Mrs Aggie Davies. I was so proud of them and remember playing with them incessantly day and night. But Mum and Dad emphatically dismissed the prospect of keeping one. A second litter followed on May 5th, 1951 sired by the same dog. There were 5 girls in the second litter. I was desperate to keep one of them. But again I was not allowed. 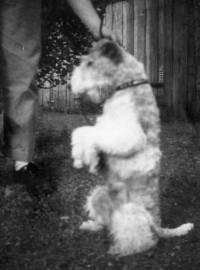 Unfortunately, due to a tragic accident which ended in Spinky being de-sexed to save her life, I was unable to breed Spinky again.

Of course 'Spinky' had to be hand stripped. So, she was taken to the old stalwart of broken coated terriers of that time Mrs Aggie Davies, breeder of a line of Fox Terriers (Wire) under the Seivad prefix. Mrs Davies took me under her wing and I spent numerous school holidays at her kennels in the inner Melbourne suburb of Caulfield. She taught me the basics of dog grooming. 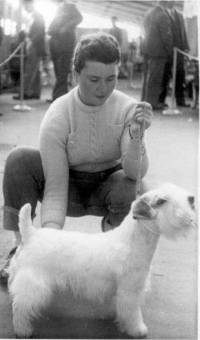 How well I remember those days in the late 1940's and early 1950's! Mrs Davies taught me hand stripping as well as grooming numerous breeds before the days of electric clippers. I experienced the art of clipping Poodles' feet with hand clippers and scissors! But never would the hand clippers used on any terrier! Already a member of the Kennel Control Council and I went to many dog shows. She also taught me the basics to show handling. Handling one of her dogs, later I competed in the 'Tuckerbox Canine Turnout' Junior Showmanship Competition at the Melbourne Royal 1952[1].

So beginning by exhibiting Mrs Davies' Fox Terriers (Wire) I learned how to hand strip. By the age 16, I was visiting people's homes by push bike, hand stripping and grooming other people's dogs, mainly terriers. With the money I earned - at seven shillings and sixpence (7/6) per dog, I purchased the Sealyham Terrier, Naneek Cost a lot, named because I had to hand strip around 42 dogs to save up the 15 Guineas to purchase him! 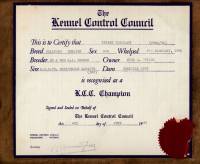 "Costa" was the first dog I totally prepared and handled to title. In those days a bus used to collect exhibitors and their dogs and transport those of us without 'wheels' to and from dog Shows. In the days before crates and cages, we used to sit on this bus with our dog in our arms or between our legs as well as carry all our gear! Of course there were no gazebos, tents or grooming tables back then. We simply sat on the grass, under the shade of a beach umbrella if you were lucky. 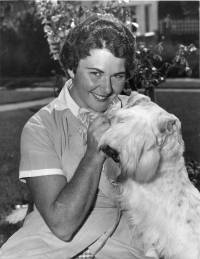 Jane with her Sealyham 1960

As a teenager during the 1950's, I had my own dog clipping business. At dog shows, I used to ask those with other breeds the basics of trimming them. Then, I used to go to people's homes, initially by push bike and later by motor scooter. So, I learnt to groom from others because in the 1950's there was no other way! I just worked on other people's pets and learned the art of the various breeds by trial and error.

In the early 1960's, I sailed by boat to England where I worked at 'Town and Country Dogs', the dog grooming salon situated behind the famous London department store, Harrods. The owners always used to always give me the terriers to do, as they appreciated my expertise in this area. Among the celebrities' dogs I groomed, I hand stripped Princess Margaret's Sealyham Terrier. 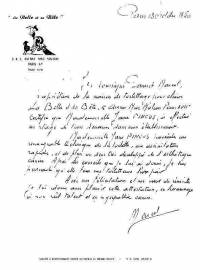 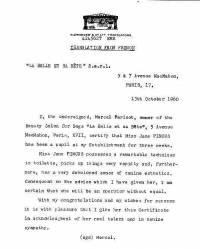 Then, I landed a job in Paris at 'La Belle et sa Bete', just near the Arc de Triomphe. There I worked for three weeks learning about blow wave techniques and hair dryers as well as electric clippers.

The owner, Monsieur Marcel is given the credit of creating the lamb clip for Poodles. Please Follow this link to the Poodle Historic Grooming Diagrams which he personally drew for me in 1960. 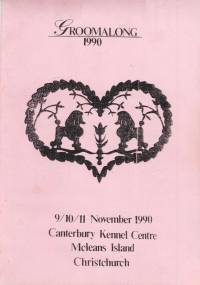 In 1990 I had the honour of participating in New Zealand's first Groomalong held in Australasia. In this event, I co-judged the hand stripping and terrier sections. I also demonstrated some of the skills in the show presentation of various terrier breeds belonging to participants.