Until 1908, the Northern Territory was part of South Australia. Consequently, formal purebred dog activities in the NT did not begin until the 1950s which is far more recent than that of the six States.

It was 1958 before the North Australian Canine Association (NACA) formed a separate dog controlling body. Just 58 dogs were exhibited at their first show. From the beginning the NACA had the support of the North Australian Show Society (NASS) who sent a delegate to all NACA Meetings. 1960 also saw a Show held in Alice Springs. By 1961 the NASS gave financial assistance to the NACA to pay air fares for interstate all-breed judges. The NASS also became an affiliate of the NACA. By 1965, in a similar way to what occurred in the six States, the President, Secretary and Treasurer of the NASS became the office bearers of the NACA.In 1970 the Darwin Kennel Club was also formed and by 1973, the Northern Territory was granted membership of the ANKC.

By 1974, the affairs of the Northern Territory were progressing nicely with a judges' training programme under way. A newsletter was being produced and interstate judges attracted more entries to shows. Obedience trials were also being conducted. Additionally, in 1974 the NASS allocated two and a half acres of the land they controlled at Winnellie to the NACA to develop a permanent dog showing complex.

By 1974, the NASS had also undertaken to build an office in an existing building at the Winnellie Showgrounds. The NACA had also begun negotiating with the RASKC (NSW) to join their computer system for registering their dogs.

Cyclone Tracy and its Consequences 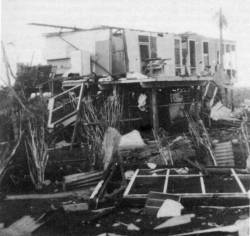 However, the hopes and dreams of the NACA were devastated when, in December 1974, Cyclone Tracy hit Darwin, the capital of the Northern Territory. This horrendous event killed 71 people with winds registering 217 kilometres an hour before their instruments failed. Over 80% of all buildings in Darwin were either destroyed or seriously damaged including the existing building ear-marked for the NACA. Miraculously, all NACA records which had been kept at the Secretary's private home, were saved.

The whole Australian dog world rallied together and raised money for NACA mainly by holding fund-raising events like dog shows in every state. Darwin held an amazing Dog Festival attracting 300 dogs from all over Australia. Altogether, more than a massive $6,000 was raised. New dog clubs were formed and the NACA joined the RASKC (NSW) in-house computer system to deal with all their registrations and Stud Book[1].

This terrible disaster turned the dog world of the Northern Territory around! In 1976 the NACA had incorporated. However, it was not until 1978 that NACA demanded the compulsory membership that brought them in line with the rest of Australia. By the 1980s there several were all-breed shows and obedience trials being held annually across the dog clubs in the Northern Territory.

By 1984 ties with the NASS were broken and the NACA had commenced the slow transition of increasing the number of Councillors to become elected. By this means they became the fully independent North Australian Canine Association Inc. trading as 'Dogs NT.  From 1985, they produced their own newsletter and published their own litter registrations.[1] Today, the original two and a half acres at Winnellie have been developed into Darwin's own dog showing grounds, comparable with most other complexes in the six states.