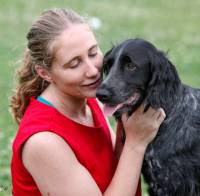 History of the Large Munsterlander 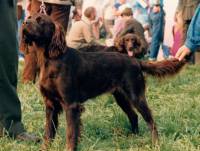 Today the German Longhaired Pointer (FCI Breed Standard No 117) is a self coloured essentially brown dog. He stands 58 - 70 cms tall and weighs around 30 kgs. In the 1800's, this was a type of dog that was well known in various regions of Germany. 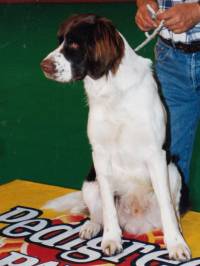 Another example of this type of dog comes from an adjacent Province of Drentche in the Netherlands. This is the Drentche Partridge Dog (FCI Breed Standard No 224), which is also still known today. This pointing dog is also essentially a white dog with brown markings and stands around 55 - 63 cms.

But in the Munsterland region of Germany in the late 1800's, when black and white German Longhaired Pointer puppies were born in the same litter as the brown ones, they were discarded. By 1909, the German Longhair Pointer Club had excluded all black coloured pups from breeding. But some dedicated people rescued them and formed a separate breed calling it the Large Munsterlander, named after the region where this happened. So this separate Club was formed purely for the breeding of the black and white 'German Longhaired Pointers'. After incorporating the remainder of these native Longhairs, in particular from West-Münsterland and lower Saxony regions of Germany onto a foundation list[2], in 1922 this new Club began the planned breeding of the Large Munsterlander we know today. 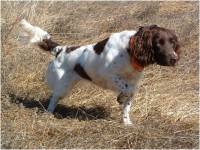 Confusingly the Small Munsterlander (FCI Standard No 102) was first produced around 1870 in the same region of Germany but from a quite different types of dogs. They came from German Spaniels or long coated Wachtelhunds (FCI Standard N0 104), which were also excellent pointers, had great scenting abilities but were also able to retrieve[1]. The Small Munsterlander still only comes in brown-white or brown roan with brown patches, brown mantle or brown ticking. But as he only stands 52 - 54 cm (around 21 ins) tall at the withers, he is smaller than the Large Munsterlander but comes from the same region, hence his name.

Today, the Large Munsterlander is a multi-purpose gundog, ideal for the rough shooter. He stands 58 - 65 cms high (23 - 25.5 ins). He has a solid black head, a white or blue roan body with black patches, flecked, ticked, or combination of these. His coat consists of long and dense hair which is not curly or coarse and feathering on his front and hindlegs and tail. 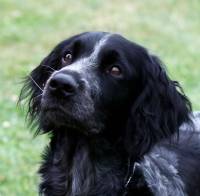 His head is elongated but in proportion to body. His skull sufficiently broad and slightly rounded, but with no pronounced occiput. His muzzle is strong with wide soft large black nostrils, with no pronounced stop and slightly rounded lips (flews). The eyes are medium size, not deep set, dark brown, with no haw showing.The dropped ears are broad, set high, lie flat and close to the head. The hair on the ears should be long, extending beyond the rounded tip. The mouth closes with a normal scissors bite.

The neck is strong and muscular and the chest is wide and with good depth of brisket. Shoulders should be laid well back, the forelegs straight and the pasterns strong. The moderately rounded feet should be tight with strong nails, but with with dense hair between the well padded toes. 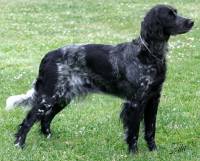 The length of body should, ideally, be square but may exceed height at withers a little. The withers are slightly high at the shoulders and slope smoothly into a firm, strong back which slopes again towards the wide croup.

The ribs are well sprung and deep, reaching a well muscled loin. The abdomen is taut and slightly tucked up. The thighs are well muscled, the stifles well turned and the hocks well let down. Any hind dewclaws should be removed. The tail is well set on, in line with the back. It is thick at the base and tapers evenly towards the tip. It should well feathered and carried horizontally or curved slightly upwards. The Large Munsterlander moves with a free, springy, long-striding gait with balanced reach and drive.