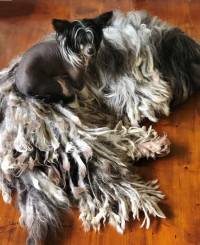 Dogs' coats vary from the two extremes of hairless breeds like the Chinese Crested Dog to the triple coated Bergamasco Shepherd Dog. Additionally, coat terminology varies as much as the coats themselves! For example, some technically double coats are called 'smooth' just to differentiate them from a longer coated variety of a particular breed. This page aims to clarify the confusion arising from definitions used in the labeling of different types of dogs' coats. 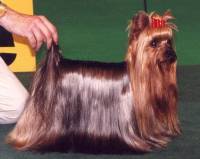 Single coated breeds have coats consisting of just one layer of hair which can come in any length or texture. For example,

1. Long haired breeds like the Yorkshire Terrier pictured, which still only has one single layer of hair. This spectacular coat which can be so long that it reaches the ground, is fine and silky and has a texture similar to that of human hair.

2. Short haired breeds like the Greyhound which has a short fine single layer of coat, lying flat and close to the skin. Because of this sleek coat, it is correctly known as 'smooth'.

3. In addition most of the waterproof curly, oily or woolly coats described below are single coated. 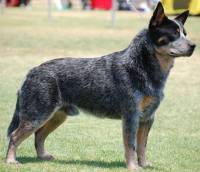 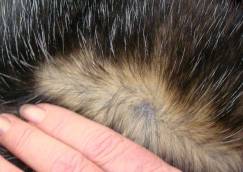 A double coat consists of two separate coats, a top coat and a dense, woolly undercoat. Typically 'Spitz' breeds are always double coated. But this Australian Cattle dog is also an excellent example because this one has a top coat and undercoat which are different colours, which makes the concept of a double coat easier to understand.

Here the top coat or outer layer is a mixture of long black or silver individual thick hairs which gives this dog his distinctive blue colour. The short, dense woolly undercoat or fur is obvious because it is light brown. This coat is so dense that the dog's grey skin is only revealed when pressure is applied. 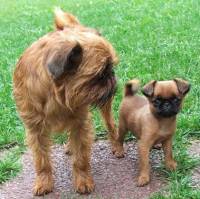 Some breeds that are double coated, when the outer layer is of a coarse texture, are called 'rough'. Many of these also come in a 'smooth' variety. For example in this picture, the adult Griffon Bruxellois is called a 'rough'. The puppy is a Griffon (Smooth), which also has another name, the Petit Brabancon. This represents a breed where in some countries the Smooth variety, the Petit Brabancon is judged as a separate breed. In other countries, including Australia, these two varieties compete together.

Double coats called rough could be easier to understand when there is no 'smooth' variety. For example the Cairn Terrier, has a 'double coat' where the 'rough' outer weatherproof layer thatches together a softer layer which like fur, insulates and protects the dog from cold and all weathers. The top coat of this Terrier which lies somewhat flat over the undercoat is harsh to touch, hence the name 'rough'. 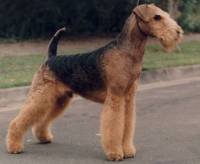 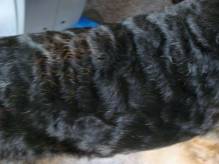 However, some other Terrier breeds like the Airedale Terrier which also have a rough coat, has a coat often referred to as a 'broken' coat. This is because when this outer rough coat is hand stripped, the new outer coat that comes through has a 'break' or wave mainly on the saddle area.[1] This wave or 'break' in the outer coat is responsible for the modern meaning of 'broken coat'. This type of coat, seen on several today's show dogs, is typical of hand stripped terriers. 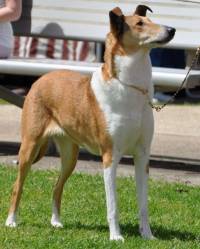 When a breed comes in two varieties, confusingly a double coated breed can also be called a 'smooth', despite an undercoat being present. In these cases the term 'Smooth' is used to distinguish it from a longer haired variety of the same breed. To add to this confusion, in some cases the 'smooth' and 'rough' varieties are judged as separate breeds while in other cases breeds of the two coat types are judged together.

An example where the two coat types are judged as a separate breed is the Collie (Smooth). These have a double coat consisting of a short, flat top coat and a very dense undercoat, contrasting with its Collie (Rough) counterpart. 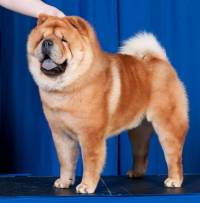 But one example of where the two coat types compete as the same breed the Chow Chow (Smooth), which has a short, dense, straight undercoat which although plush-like. This becomes more evident when compared with the 'rough' coated Chow Chows which have a much more distinct ruff and longer feathering behind his legs and on the tail.

Another example of where the two coat types compete as the same breed is the Saint Bernard.

The Komondor and Puli of Hungary have a fascinating coat which is corded. The cords are due to the twisting together of the hairs of the topcoat top coat with the undercoat to create spiral strands. This shaggy coat is very dense and can tend to form matts rather than cords if the individual cords are not groomed correctly. This requires separating each cord by pulling them apart from any adjoining cords. 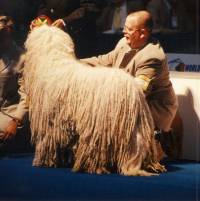 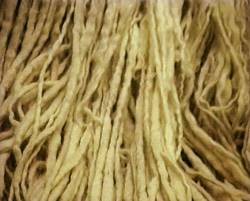 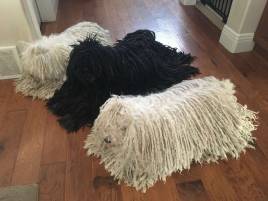 However, the coat of the Bergamasco of Italy does form flocks which are not separated into cords as above. Flocks are formed when the fine, dense, oily undercoat combines with the woolly top coat. Then 'goat' hairs which are isolated strong, harsh isolated strands of hair, thatch or weave the other two coats together to form flocks. As three coats are combined to form these flocks, that technically makes the Bergamasco a triple coated breed! 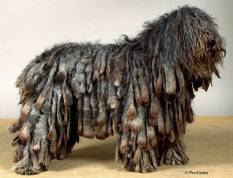 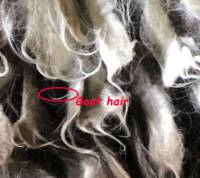 This is a direct comparison of the different the types of coats that have been developed in different regions to protect dogs from the cold when working in water. In addition to the examples below, there are several breeds like Poodles, that were historically waterdogs, but their single layered profuse coat lends itself to caricatures and modern show clips.

The Curly Coated Retriever, developed in England should be completely covered in small tight-knit screw Astrakhan type water-resistant curls that feel oily and crisp. Although the curls on the ears may be looser, the hair on the foreface, front of legs and feet is short, smooth and straight with a slight feathering on the back of the forelegs. 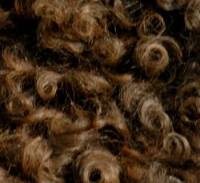 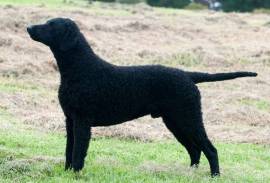 The Irish Water Spaniel, developed in Ireland should be covered with a coat consisting of dense, tight, crisp ringlets, free from woolliness, with a natural oiliness. But the tail is only covered with curls for only the first three to four inches when the curls stop abruptly, leaving the remainder bare or covered with short, straight fine hair. That is why it is usually called a 'rat tail'. 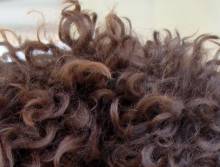 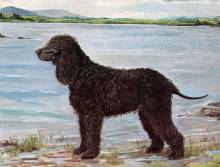 The Lagotto Romagnolo developed in Italy, has a unique waterproof coat of woolly texture with curls forming the topcoat and a woolly undercoat. The curls should never be twisted to form thin cords. Instead it has tight, ring shaped curls evenly distributed over all the body and tail, with visible undercoat. But the curls on the head and cheeks are not as tight forming abundant eyebrows, whiskers and beard. The coat is clipped to a maximum of 4 cms (1.5 inches), but on the head it can be longer. The coat should never be clipped short preventing it from curling or assessment of texture, nor may it be brushed up in the fashion of the Poodles and Bichon Frisé breeds. The correct clip is unpretentious and contributes to accentuate the natural, rustic appearance. 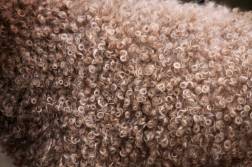 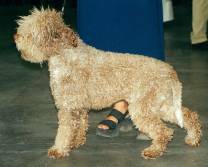 The Spanish Water Dog has a coat that is always curly, of a woolly texture but without undercoat. Curly when short, can form cords when long. Puppies always are born with curly hair. The recommended maximum length is 12 cm (15 cm extending the curl) and the minimum 3 cm so the quality of the curl can be assessed. It should always be even, following the outline of the dog. 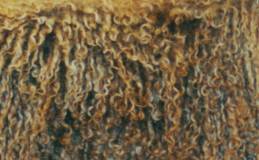 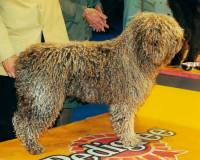 The Portuguese Water Dog (PWD) developed in Portugal has a distinctive but profuse coat composed of two different types of coat, with the line between not clearly defined. Both without undercoat, it should cover the whole body except under forelegs and thigh. The photo below on the left shows the two types of coat: 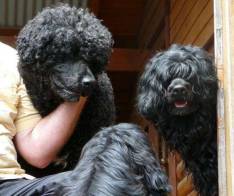 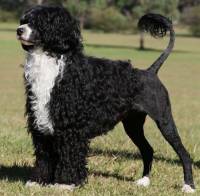 The area of the coat which is cross hatched is commonly called 'the vent'. Whereby technically the vent usually refers to the anus, in dog terminology when describing coat colour markings, the vent means an area encompassing the anus, the dog's genitalia plus some of the surrounding area as shown.