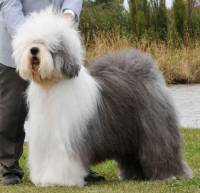 In Britain 1570 AD, Caius described 'the Shepherd's Dog' as any dog that herded stock. This 'Shepherd's Dog' was also called a 'Sheepdog' or 'Colley'. But some of these Shepherds dogs also drove stock to markets, crossing the Border Region between England and Scotland. From these drovers' dogs we get two of today's pure breeds, the Old English Sheepdog and the Bearded Collie.

The first mention British Sheepdog we found was in the work of Chaucer (c mid-1300's) where the name 'Coll' or 'Coaly' was given to a type of black faced sheepdog which worked the 'Coaly' sheep from Scotland. Later the name 'Coaly' became Colley and later still, Collie.

Like all other Sheepdogs, the British Sheepdogs gradually developed according to the type of sheep they worked, which depended upon the terrain in which they lived. The Scottish sheepdogs worked on the hills and highlands of Scotland where the sheep were agile, lighter boned and more active than the heavier, slower moving sheep which occupied the flatter lands of the southern districts of England. By the mid-1850's, the English Sheepdog developed into a multi-purpose Shepherd's Dog which could not only herd a mixed flock of sheep, goats and maybe cattle and drive them to market. But this English Sheepdog would also guard the flock, acting in the role of a Livestock Guardian Dog. This required a more substantial type of dog. 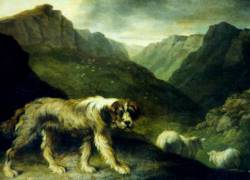 Sheepdogs of England usually belonged to underprivileged shepherds who were employed by rich landowners. English Shepherds' dogs were simply an adjunct to the peasants' way of life. Although some early illustrations of various types of dogs came in the form of paintings, woodcuts, engravings and etchings, it would not be until 1803 before Reinagle painted an English Shepherd's dog which appeared in 'the Sportsman's Cabinet'.

Edwards 'Cynographia Britainnica' also painted by Reinagle around 1800 shows a short tailed dog and called him a Shepherd's 'Curdog'. When Berwick drew this 'cur dog' also around 1800, it too had a short tail. To this day the English word 'curtail' meaning to stop something, was derived from the practice of docking dogs' and other animals' tails!

But the word 'cur' was also used to describe a mongrel or useless dog, docked or not! This demonstrates that the bob-tail gene was known in English dogs well before any of the English sheepdogs were first described.

The bob-tail gene became further entrenched in English Sheepdogs when, in 1796, licensing dogs became law demanding an annual tax unless the dog had a short tail. At first, poor people were exempt and permitted to keep just one dog. Then an exemption was made for dogs used for herding sheep or cattle on a farm, or used solely by a shepherd in the execution of his duty. Later, there was an exemption if the owner signed a declaration on a proper form drawn up by the Commissioner of Inland Revenue. It is doubtful that Shepherds could read or write, let alone sign their names and understand such a complicated procedure. So to avoid this tax, docking English Sheepdogs or selecting pups born with natural bob-tails, became usual practice, so much so the name 'Bob-tail' is still used to describe these dogs in some parts of the world today. 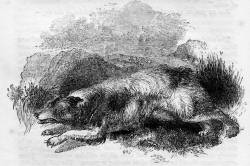 '... guide the sheep in the northern and open parts of the country... and where strength is needed to turn an obstinate sheep he is crossed with a larger dog'[3]

Then Idestone in 1872 wrote of the English Sheepdog as being

'adopted by shepherds further south than Newcastle... slower and heavier than the Colley of Scotland... admixture of many breeds blue, grizzled, large-limbed, surly, small eared and small-eyed leggy bob-tailed dog'[4] 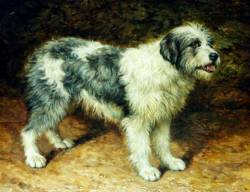 It appears that by the late 1800's, the English Sheepdog had become more heavily built than the Collie or Scottish Sheepdog. Because he had become a more substantially built dog, there is a distinct possibility (but no proof) that there was a cross with one of the European Sheepdogs. 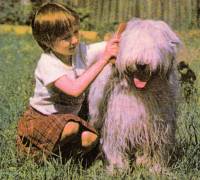 According to Aubrey Hopwood (1905), as there was general trading with Russia around 1900, the South Russian Shepherd Dog the Owtcharka could have been introduced, giving the English Sheepdog certain traits and physical characteristics. He describes the Owtcharka as a

'very fine Sheepdog, indeed, with all his tail on, big and blocky, with massive bone and full, correct coat, strong, active and good-natured, in general conduct staid and dignified'[2]

This theory has some creditability as the Owtcharka (FCI 326) is most often white, but also white and yellow, straw colour, greyish (ashen grey) and other shades of grey; white lightly marked with grey; grey speckled. His height is a minimum 62cm for a female and 65 cm for a male which is just a few centimetres more than the Old English Sheepdog. 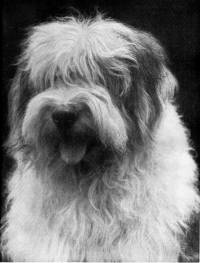 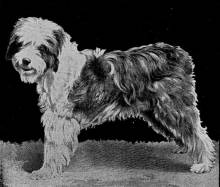 The Old English Sheepdog's adaptability over the next century made him a dog for enthusiasts. This wonderful description was penned in 1905 by Aubrey Hopwood who wrote the first book devoted solely to the breed:

Certainly his heavy coat is a drawback in wet or muddy weather... you must make up your mind to rough dry him before he settles on your Turkish carpet. But his comradeship is well worth the five minutes trouble. In his quaint, unobtrusive way, he will make himself at home in a drawing room, a railway carriage, a hansom cab, or on a show bench. Wherever you take him he is ready to adapt himself to his surroundings, sensible, even-tempered, picturesque, but never ridiculous.

History of the Bearded Collie

Sometimes called the 'Highland Collie' the origin of this breed is usually connected with the Scottish Highlands and Border Region of Scotland with England. But the Bearded Collie has an obvious connection to the English Sheepdog, especially when one considers the painting by Reinagle above. Like the Old English Sheepdog, he was also a multi-purpose sheepdog who could not only work cattle and mixed flocks of domesticated animals, he would also guard them if necessary and drive them to market.

In the early 1800's before pure breeds had developed, the line between the English Sheepdog and the Highland (or Bearded) Collie was unclear. But these two types of sheepdogs, somewhat like early Welsh Grey Herding dogs, were certainly behind what we know in Australia as 'Smithfield Collies'. This type of dog was integral to the development of Australia's sheep industry which commenced in Tasmania, the island state situated in Australia's south where the terrain and climate is somewhat similar to the South of England. Tasmania was first settled in 1802. The first sheep to be imported there were fat-tailed Cape sheep from South Africa and the Bengal sheep from India. These sheep provided mutton to feed the early settlers. But in Australia for over 20 years, people acted as shepherds.

Then in 1825, 2-3 pairs of rough 'Colley dogs', together with 122 sheep arrived in Tasmania on a ship called the 'Hugh Crawford'[8]. This was the first ship to sail directly from London to Sydney. It then went to Hobart in Tasmania, bringing 'free' immigrants[11] that is, potential settlers who were not convicts. These rough 'Colley Dogs' had probably driven flocks of sheep to the 'Smithfield Market' in London. As this market was quite a hub because it connected London to other parts of Britain by rail, when the dogs arrived in Australia they became known as 'Smithfield Collies'.

In Tyzack's Annual published 1912, the importation of 5 Old English Sheepdogs from England is recorded from 1899 but none with pedigrees except for 'Home Farm Tring' (pictured) in 1910, owned by Mr W Scott. This gentleman also owned a home bred bitch, 'Tasmania Lady'[9]. From this pair he bred Alberfeldie II. She was sold in 1911 to Douglas Picking who mated her back to her sire establishing Frankston Kennels. With several more imports, this kennel kept the breed alive until well into the 1950's. When 'Ch. Frankston Esmond Surf King' won Best Dog Show all-breeds at Sydney Royal in 1955, the Old English Sheepdog was put on the map. 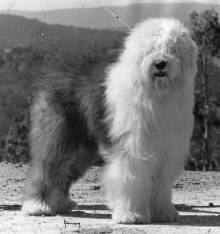 In 1968 Victoria formed 'The Shaggy Dog Club' which was the beginning of Old English Specialist Breed Clubs in Australia. South Australia was the first to become affiliated, followed by Victoria and then NSW in the 1970's. This inspired an influx of imported dogs, the most influential being 'Ch Prospectblue Apollo Boy', owned by Denise Humphries. This famous dog sired some 38 Champions leaving his indelible stamp of correct breed type still evident to this day in some of our best Old English Sheepdogs.

History of Bearded Collies in Australia 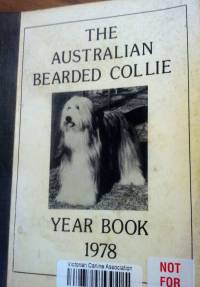 1968 also saw the first Bearded Collies arrive in Australia when Ab and Val Aumann brought in Hopsack of Tambora, Edenborough Star Trek and Rushmoor Loyal Crusader from UK[13]. The latter two produced the first litter born here, with Fetlara Lanark becoming our first home-bred Champion, campaigned to title by Howard Smith before being exported to NZ in 1979. Then Dynenooks Diplomat was imported by Graham Kerr, and Keith and Bette Higgins also brought Penreens Annie Laurie into NSW and Calderin Leal into the ACT[10]. This last named dog put Bearded Collies on the map here by wining 11 Best in Shows and 33 Best in Group.

Ch Calderin Leal (Imp UK) is featured on the cover of the 1978 Year Book (pictured). This pocket-sized book was amazing for its time! Produced by the Bearded Collie Social Club of South Australia, it contains photos of all major winners of Bearded Collie Clubs and Royal Shows, plus 3-generation pedigrees. Within one decade, the Bearded Collie was firmly established in Australia based on the best British lines.

Comparison between the Old English Sheepdog and the Bearded Collie

[3] William Youatt - 'The Dog' published 1848 London Charles Knight Fleet Street (under the Superintendence of the Society for the Diffusion of Useful Knowledge.) Chapter 1 The Varieties of the Dog - Second Division - the Sheepdog Page 60

[7] Bill Robertson 'Origins of the Australian Kelpie, Exposing Myths and Fabrications from the Past' Self Published Chapter 8 'Importation of Collies into Australia' Page 35

[10] The History of Purebred Dogs in Australia' published by OzDog Newspaper 1997 The Bearded Collie by Lyndall (Murty) and Jim Black Page 41.

[13] Original Registrations sited in archives of the VCA Library.