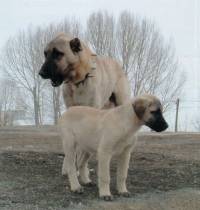 Nobody in Turkey has ever called their legendary Livestock Guardian dog the Anatolian Shepherd Dog. But in the last few decades, some have also called it the Kangal "Çoban köpegi" which means Kangal Shepherd Dog or "Koyun köpegi" which means sheep dog with a black head. This dog indigenous to Turkey was also called the Karabash which came in other  colour variations according to the area where they developed in Turkey as the map below indicates.

In 1965 the first breeding pair arrived in UK. Despite the original suggestions of Turkish Karabash, Karabash, and Anatolian Karabash Sheepdog the name Anatolian Karabash Dog was the name first accepted by the Kennel Club (UK). A few years later, whilst selecting more dogs to import into UK, another group of people stayed in the Turkish town of Kangal. This second group suggested the name Kangal which the Kennel Club (UK) adopted replacing the original accepted name. The name Kangal was further entrenched in 1996 when an outsourced Turkish postage stamp also incorrectly named Turkey's Livestock Guardian Dog the "Kangal köpegi" or Kangal. Later still it was again changed to Anatolian Shepherd Dog which is now accepted by the Kennel Club (UK) AKC, and ANKC[1]. As if that is not confusing enough, the breed type we see in some of our show rings today often does not reflect a dog with the athleticism required of his ancestors! 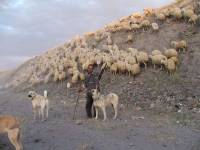 Shepherd with Sheep and Karabash Dogs

The original Livestock Guardian Dogs of Turkey are still seen working with nomads who move them to find sufficient food in a process called transhumance. These working dogs still wear spiked collars to protect their throats if it is necessary to fight predators. For Turkish shepherds who still use the Karabash for its traditional purpose, many believe the Anatolian Shepherd Dog developed outside Turkey has become too big and cumbersome to be sufficiently agile for the zealous work of the Karabash that protects flocks 24/7.

Boz or Dun Coloured through Fawn

Between 2002 - 2007 a PhD study was carried out by Dr Orhan Yilmaz to determine the morphological characteristics of Karabash dogs raised on private and State farms within Turkey. Data was collected from 41 provinces from a total of individual 735 dogs, 432 males and 303 females. This interesting study[2] gave rise to the following information:

Karabash have the structural characteristics of animals living in wide open spaces. Because there are almost no hiding places, both the Karabash and the predators are physically well adapted to the terrain in which they live and know exactly how to take advantage of it. So both the Karabash and the predators must be quick and and able to very run fast to avoid physical confrontation. People with bad intentions also have good reason to be afraid of these dogs which can unintentionally cause real physical harm if provoked. 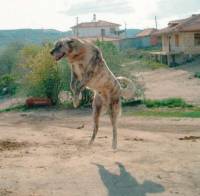 The Karabash comes in different coat colours according to the area in Turkey they were developed (see colour coded map above). They are presented here so it is up to future generations of the pure bred fraternity to consider where one variety ends and the next one begins. In the picture on the right we have the Kircil or grizzle above and the Yagiz or ashy below. 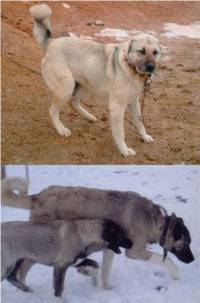 Grizzle (top) and Ashy (below)

Erzurum or Dark Yellow to Red

Note the Kars is sometimes also designated as a variety of Karabash. But it is generally accepted that the same type of dog has developed on both sides of the border of Armenia and Georgia and throughout the Caucasian Mountains. As this border historically has been changed many times and the the FCI has already recognized this longer haired type of dog as the Caucasian Shepherd Dog, although included in the map they are not included in the categories above.