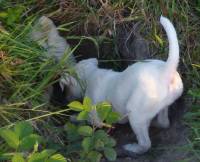 The Jack Russell Terrier and Parson Russell Terrier are 2 different pure breeds. Confusingly they are both named after the same man, Parson Jack Russell. Known as the 'Sporting Parson', his working Terriers were legendary. In the 1800's, some were developed into showdogs and exhibited as Fox Terriers. 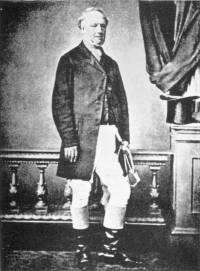 Parson Jack Russell began his lifetime passion in 1815 with a Fox Terrier bitch called 'Trump'. T.H.Scott wrote in the 'Sportsman's Repository' in 1820 that other Fox Terriers at that time existed that were just as perfect point for point as "Trump"who laid the foundation for the Parson's strain of working Fox Terriers.

Although Parson Jack Russell was a founding member of the Board of the first Kennel Club (UK) and a terrier judge, he kept his own records of his own dogs in his separate strain of terriers selected singularly on their gameness. At that time, because the pedigrees of these dogs were not recorded in the Kennel Club (UK) Stud Books, they were never acknowledged as pure-breeds.

The pedigrees that were recorded in the Stud Book (UK) were confined to those dogs which competed in shows, re-named Fox Terriers. Terriers that were sufficiently game to do the required job were selected by the Reverend Jack Russell and their names recorded in the Parson's private Stud Register. Consequently, at this time, the gene pool was not split by either leg length or coat type. The Reverend's selection was singularly on gameness and the ability to work. 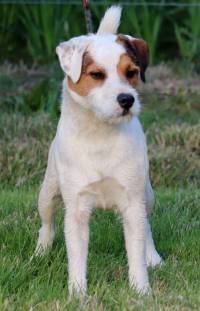 "[Parson] J. Russell, who is certainly the father of fox terrier breeders, tells us that he has bred his dogs since 1815, and their pedigree has been kept quite pure,... "[2].

Consequently, Parson Jack Russell witnessed the gene pool some of his original working Terriers split off into showdogs called Fox Terriers. But it is indisputable that his respected old fashioned working type of terrier bearing his name has, to this day retained this game, working instinct. 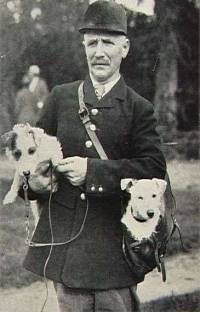 The Reverend Parson Jack Russell's working terrier had legs of sufficient length to hunt with his hounds yet had a chest so small and flexible it was able to wriggle along and squeeze through the incredibly small den or tunnel where the fox lived. If the Terriers did not have the length of leg to keep up with the hounds, they were carried to the scene of the hunt in the coat pockets of a 'Terrier Man', often mounted on a pony.

Although the Parson died in 1895, for almost 100 years, his lines were religiously kept alive until 1930 by Arthur Heinemann, a prolific writer and 'Master of the Cheriton pack of Hounds. Upon Arthur's death his kennel maid, Annie Rowl (later Harris) continued until the end of World War Two. Then various devotees mainly from the counties of Devon and Somerset kept the original lines of the Parson's working strain until the show scene took over in the late 1980s[4].

By the middle of the 1990's, the popularity of the Parson Russell as a showdog was further encouraged because of the movement against fox hunting as a sport. However, the gameness and the working capability of the Parson remains. This is the reason for the mandatory requirement in the Breed Standard to 'span the Terrier'. The Breed Standard of the Parson Russell Terrier was finally approved by the Kennel Club(UK) in 1994 with the ideal height of 36 cm (14") for dogs and 33cm (13") for bitches[3]. 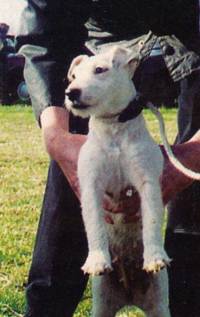 Later 'Skipper Saville' gifted from the Cowday Hunt was imported, complete with a a 3-generation pedigree drawn up by he Hunt Club. These Hunt Clubs were in specific areas in which the Terriers were bred to hunt.

While these dogs varied in physical characteristics, they had remarkably similar den or hunting skills while retaining the ability to be spanned. The Jack Russell Club of Australia was formed in 1972 and their pedigrees recorded in a breed register from 1975. This was the first Jack Russell Breed Register formed in any part of the world. In 1990, the ANKC drew up a Breed Standard and on January 1st 1991, the ANKC recognised the Jack Russell Terrier as a pure breed with England as its country of origin but Australia its country of development. The ANKC also then accepted pedigrees from the Jack Russell Club of Australia until June 1994[5]. 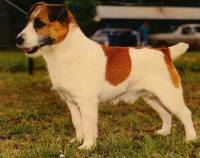 Pictured on the right is our first Australian Champion, Ch Jim Beam. While his height was 10"-12" (inches) this did not make him a short legged terrier with his body hung between his forelegs like a Scottish Terrier. Instead the Jack Russell's legs from elbow to ground should be equal in length to half it's body height, enabling it's chest to be spanned as illustrated. 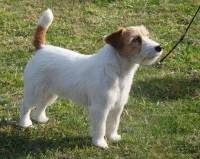 Both the Jack Russell's and the Parson's working background is acknowledged in their respective breed standards with the circumference of their chests being measured by a process called spanning. All Jack Russell's and Parson Russell's should be procedurally spanned whilst the examination on the table is taking place. 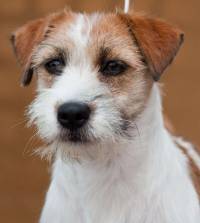 Whilst the flat skull has been retained from their Fox Terrier background, the ears of both the Jack Russell and the Parson are lower set than the Fox Terrier and must not be carried above the level of the skull.  Rather the ears should be carried somewhere between that of a button ear and a side placement ear. 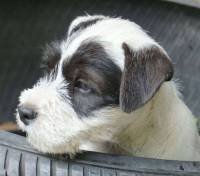 Additionally, neither the Jack Russell nor the Parson should have the elongated head so admired in the Fox Terrier. Instead, in order to be assured of retaining the strength of muzzle for working purposes, the foreface is required to be no longer than the length of the skull. So, there should be more stop between the skull and the foreface than its Fox Terrier predecessor. 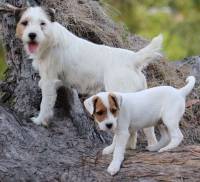 Parsons Rough and SmoothIt is important to understand that the original coat type of rough through to smooth and all variations in between have always been equally correct. Parsons and Jacks have never been split into different breeds by coat type like the Fox Terrier (Smooth) and the Fox Terrier (Wire). The two extremes of coat type illustrated on the left demonstrate coat limits.

Historically several authorities preferred the rougher jackets to more smooth ones. They believed a hard, close rough coat gave the dog more protection against all types of weather as well as safeguarding it better from encounters with the fox and other quarry. 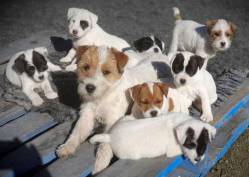 Parson mother with her 7 pups

Today the coat should never be excessive, encouraging trimming and modern sculpturing techniques which detract from the workmanlike appearance of both these breeds. Variations between these are equally correct like the mother with her litter of seven with all coat types on the right. Other subtle differences in conformation between the Jack Russell and Parson Russell Terriers can be observed by diligent students and breed enthusiasts.