The Irony of the Dog on the Tuckerbox 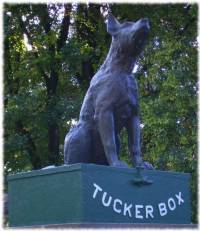 Statue of the Dog on the Tuckerbox

Only in Australia could a dog that fouled the food of our early settlers become immortalised in stone and be one of our most famous icons! That is the irony behind the 'Dog on the Tuckerbox' statue situated at Gundagai on the main highway half way between Sydney and Melbourne. 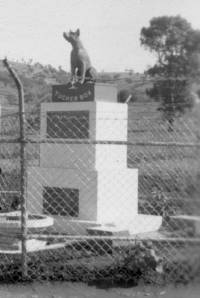 Origin of the Fable

The origin of the 'Dog on the Tuckerbox' fable was born deep in the Australian bush in the Gundgai area of New South Wales in the 1820s. This area was serviced by bullock teams. The wagons had travelled south and west from Sydney along makeshift tracks over rough and difficult terrain. In inclement weather, teams often became bogged and had to wait or seek help. The fable was that when one bullocky died, his dog sat on the tuckerbox for the rest of its life waiting for his master to return.

At night, the wagon drivers or 'Bullockies' would sit around the camp fires reciting ditties and rhymes. They often stopped at Five Mile Creek where there was a fresh water spring plus, by 1851 an Inn[1]. But when one dog fouled the foodstuffs contained in a tucker box, the famous fable arose. In those days food containers were made of easily permeable materials like woven paper or cloth. So fouling the food contained within these bags should a dog decide to lift its leg, was inevitable! But if the fouling of the food that took place by the dog's misdemeanour's was the solid kind as implied by the word 'shit', one can only speculate about the mess that sparked the 'Dog on the Tuckerbox' legend[3].

It reads as follows:

I'm used to punchin' bullock teams across the hills and plains.
I've teamed outback for forty years through bleedin' hail and rain.
I've lived a lot of troubles down, without a bloomin' lie,
But I can't forget what happened just five miles from Gundagai.

'Twas getting dark, the team got bogged, the axle snapped in two.
I lost me matches and me pipe, so what was I to do?
The rain it was a-coming on, and hungry too was I,
And me dog shat in me tucker-box five miles from Gundagai.

Some blokes I know have stacks of luck, no matter where they fall,
But there was I, Lord love a duck, no bloody luck at all.
I couldn't heat a pot of tea or keep me trousers dry,
And me dog shat in me tucker-box five miles from Gundagai.

So in 1880 Mr. Collins, a newsagent and keen businessman, commissioned Tom Kinnane, a reporter on the Gundagai 'Independent' newspaper, to piece together the lines of the original poem. When Bowyang Yorke penned the re-write, he changed the word 'shat' in original text to 'sit' because 'shat' was considered crude and rude and therefore politically incorrect. He also changed 'Five miles from Gundagai' to 'Nine miles from Gundagai' to distinguished it from the original.

The fable then became famous throughout Australia, both in the bush and in the cities. Consequently a version 'Beyond the City Gates' was written by Jack Moses in 1923. It appeared on many souvenirs and matchbox covers that were distributed throughout the land. This was the beginning of the Australian souvenir industry that has immortalised this fable.

I've done my share of shearing sheep,
Of droving and all that;
And bogged a bullock team as well,
On a Murrumbidgee flat.

Nine miles from Gundagai.
I've been jilted, jarred and crossed in love,
I've seen the bullock stretch and strain
And blink his bleary eye,

And the dog sit on the tuckerbox
And sand-bagged in the dark,
Till if a mountain fell on me,
I'd treat it as a lark.

It's when you've got your bullocks bogged,
That's the time you flog and cry,
And the dog sits on the tuckerbox
Nine miles from Gundagai.

We've all got our little troubles,
In life's hard, thorny way.
Some strike them in a motor car
And others in a dray.

But when your dog and bullocks strike,
It ain't no apple pie,
And the dog sat on the tuckerbox
Nine miles from Gundagai.

Why the Change of Words was so Ironical

Altering the word 'shat' to 'sit' in the altered version makes no sense. Especially when one considers the original word 'shat' is a correct word in our English language! It comes from the Old English word "scitte" which is similar to the Dutch and German words  "schijten" and "scheissen" respectively, all three being Germanic. The word 'shit' became further entrenched in the English language as an acronym which dates back to an old nautical term of the 15th and 16th Centuries when manure as a fertiliser was transported by ship. If stored below deck and became wet, it produced methane gas. Combined with the exposed flames of lanterns of those days, this caused explosions that destroyed many ships. So containers were then stored above deck and labelled S.H.I.T, which literally meant "Ship (or Stow) High In Transit".

Whatever its origin, the word 'shit' and its past tense of 'shat' are legitimate and not swear words in the English language today. When given an explanation, it is easy to understand the irony of how this dog, erroneously immortalised by this statue, became a famous Australian icon despite this dog's unacceptable behaviour!

The Building of the Statue 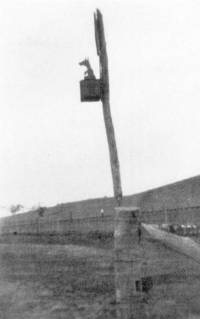 But the arguably most impact on the 'Dog on the Tucker Box's' immortality is its famous statue. Around 1926, an unknown resident hoisted the first dog 'monument' at site of five miles (pictured) from Gundagai, probably the result of the fame of Jack Moses' poem.

Consequently, local stonemason and sculptor Frank Rusconi was commissioned to make a proper statue. So, the statue that stands today was unveiled on Monday, 28th November 1932 by the then Prime Minister of Australia, Mr. J.A (Joe) Lyons and the fence was put around it within a couple of days. 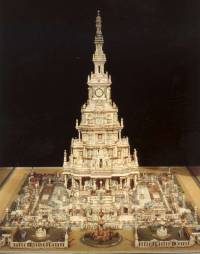 It is ironic in itself that this statue should become Frank Rusconi's best-known work. Frank Rusconi was a very talented man. Before he came to Australia, among his other works is the marble stairway in Westminster Abbey. He also worked on the altar of Saint Marie's Cathedral in Paris. However, as a local Gundagai resident and proud Australian, Rusconi took 28 years and 20,948 individual pieces of marble, each piece cut, turned and polished by hand to produce an amazing work, a cathedral in miniature.

This cathedral, plus a replica of the altar of Saint Marie's Cathedral in Paris, now stands in the Gundagai Tourist and Visitor Information Centre. All the marble was sourced from quarries in NSW. Although Rusconi worked on the original alter in Paris, no plans, drawings or construction charts have ever been found. It appears he did the work entirely by sight, to demonstrate to his peers back in Italy the quality and variety of stone to be found in Australia[2]. It is also ironic that neither of these wonderful sculptures ever received the fame of the 'Dog on the Tuckerbox'.

Gundagai's fame was further immortalised by Jack O'Hagan in 1937 in his popular songs 'Along the Road to Gundagai' and 'My Mabel waits for me' that put the town on the world map. As time went by, controversy continued over the exact location of the monument. Should the famous monument be moved closer to the town? And was it 5 or 9 miles from Gundagai?

Today tourists have solved the problem with the conglomeration of buildings that now surround the famous statue. 'The Dog on the Tuckerbox' is an appropriate half way toilet stop when driving that long dual carriageway between Australia's two largest cities, Sydney and Melbourne. I wonder how many who stop, reflect about the irony of how today's fast foods have immortalized our pioneers' primitive tuckerbox!

From a ditty about a dog that fouled in a tuckerbox long ago in inclement weather, to a 'must see' attraction that stands on some arbitrary spot five miles from Gundagai! So, the irony of the story of the 'Dog on the Tuckerbox' lives on.

[3] The Dog on the Tuckerbox https://www.thedogonthetuckerbox.com/poemsfolk_songs