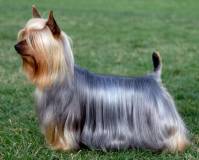 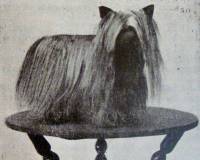 Historically, the Yorkshire Terrier was bred from terriers designed for ratting. It was first separately identified in the English Stud Book in 1886 as being longer-coated than any other terrier. Weighing up to 14 pounds, classes were provided in two sections, those over and those under 8 pounds. As their popularity as a showdog increased, the larger dogs became increasing unpopular but the smaller ones with the beautiful long silky coats began to command large prices[1] and so we have the Yorkshire Terrier we know today. 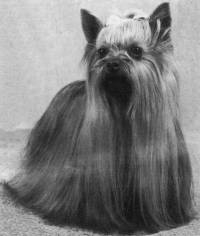 History of Yorkshire Terriers in Australia

In Australia the first Silky and Yorkshire Terrier Club was founded in 1908, the Yorkshire Terrier being one of the few Toy Breeds to be popular at that time[4c].  Some 58 importations from England from 1890 to 1911 were listed[4]. Additionally another 50 were listed in the Stud Book[4a]. 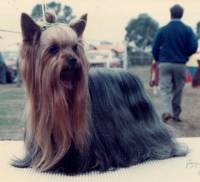 Yorkies have arrived in Australia at various times ever since, the most worthy of mention being Mrs Molly Hole ("Stragar") who migrated here in the early 1970's accompanied by 8 bitches and 2 stud dogs and encouraged so many others in this breed[5].

But the most prolific winning Yorkshire Terrier in Australia from 1982 to 1991 was Bill Zaal's home bred Ch Glen Petite Sweet Joany (pictured). As well as all-breed Best Exhibit in Show and Group wins, at breed level she won 9 consecutive 'Royal Melbourne Show' Best of Breeds, and most of the Victorian Yorkshire Terrier Shows during that period as well. 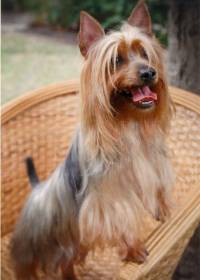 "Its sire was Australian; component parts were many -
Yorkshire, black and tan,and Scotch - it proved much worse than any.
Another dash of Yorkshire; the result was far more pretty;
They called it 'Sydney' Silky but quarrelled o'er the city"[4a]

History of the Australian Silky Terrier

The Blue and Tan Silky Terrier was originally a bi-product of matings between the rough-coated black and tan Australian Terrier and the Yorkshire Terrier to soften the coat. 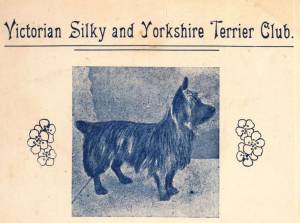 In 1904, when the Victorian Silky & Yorkshire Club wrote their Breed Standard, they followed example set by the Yorkshire Terrier Club of  England where there were 2 weight divisions. But the Victorians decided their weight classifications would be for those under 6 pounds and those weighing from 6 and up to 12 pounds. In contrast the first known classification for the Sydney Silky was at the Sydney Royal in 1901. It had only one class. This was for 'Terriers, Australian Soft or Silky Coated'. In 1909 the Victorian Silky and Yorkshire Club held its first Show. By 1912 Tyzack's Annual had listed 22 Silky Terriers (Victorian), without designating the weight of any of them[4a].

Meanwhile in 1906 the rival body in Sydney adopted a similar Breed Standard but with only one allowable weight, this being 6 and under 12 pounds. The Sydney version was called the 'Sydney Silky' while the rest of Australia knew it simply as the 'Silky', making this essentially same breed known under two different names! These two Breed Standards remained in place until 1950 when the Victorian Kennel Control Council (KCC) developed and revised it. In March 1959 after the ANKC was formed, this revised Breed Standard was adopted and the breed became known as the Australian Silky Terrier[2].

By 1972 the Australian Silky Terrier was taking its rightful place alongside other recognised breeds with Ch Dulcannina Kansas owned and bred by Mrs Sybil Camac of South Australia and handled by her son James, winning Best Exhibit in Show at Australia's largest dog show at that time, the Melbourne Royal. Please click on the accompanying video clip.