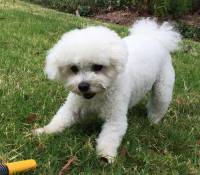 Bichons are complete extroverts, a joy to live with and well suited to modern society. Bichons are comparatively recent additions to the pure breed dog world, resurrected from virtual extinction. With controversy surrounding their ancient history, a few facts are presented here in the hope that the typical coat of each variety will not be dissipated by modern show ring grooming techniques.

History of the Bichon Frise

The Bichon Frise of France is the first of three Bichon varieties we shall consider here. As explained in the History of Companion Dogs, these small white dogs travelled from Tenerife in the Canary Islands accompanying Spanish seamen along trade routes to destinations where the dogs were traded.

The first known Bichons were named the Bichon Tenerife after one of the Canary Islands from whence they came. These small white dogs were first mentioned in French Literature during the 1500's. Mostly 'house dogs' and favourites with women and children, they had a distinct type by the time they were popularized by Napoleon Bonaparte. From 1848-1870 he was President of France and later its Emperor. By 1900 this little dog's extroverted personality, ability to be trained to stand on its hind legs, combined with its happy disposition made it popular as a performing dog in circuses.

Sadly, this type of dog was reduced to minimal numbers during World War One. 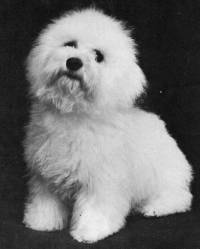 Resurrected in France by the 'Friends of the Belgium Breeds' and the President of the the Toy Dog Club and a few enthusiasts, they produced a Breed Standard, naming them the 'Bichon Tenerife'. In 1933 the Société Central of France renamed the breed the 'Bichon à Poil Frisé', translated as 'the Curly Bichon' and admitted them to the French Stud Book and listed as a French/Belgium breed.

World War Two again reduced the European Bichons to such low numbers, once more they faced extinction. But in 1957, they were imported into UK and recognised by the Kennel Club UK in 1974[6].

Fortunately also some had been exported to USA in the 1930's. These, combined with dogs of unknown parentage that were accepted as Bichon Frise by the European FCI as late as 1969, provided the world with the basis of the breed we know today[1]. It was recognised as a pure breed by the American Kennel Club 1972, with the first Bichon arriving here in Australia from USA in 1976.

History of the Havanese 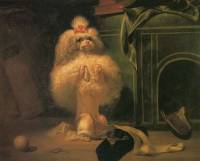 Like the Bichon Frise, the Havanese of Cuba developed from the BarBichon of Tenerife. During the 1500 - 1600's, these little dogs were carried by Spanish ships which transported merchants who took metal and spices half way around the world to trade them in South America's 'New Spain', Cuba. Here this small dog was called the 'Blanquito de la Habana' but in Europe it became known as the 'White Cuban'. By the late 1700's there were crosses with the Toy Poodle as they became the pampered house dogs of the wealthy Cubans who owned large estates.

But from 1953 - 1959 a Civil War known as the Cuban Revolution stifled Cuba's economy and plunged the country into poverty. So some of the once pampered Havanese dogs were evicted and became street dogs. Others were gifted to the servants of the wealthy land owners when their estates were abandoned. But many wealthy Cuban owners travelled to Florida, USA taking their precious dogs with them. So sufficient numbers survived for an American, Dorothy Goodale to use the 1963 FCI Breed Standard and develop them as a pure breed. They were recognized by the American Kennel Club in 1999. The first two arrived separately in Australia in 2000, a dog from USA followed by a bitch from the Netherlands[2].

History of the Coton de Tulear

The Coton de Tulear of Madagascar also developed from the BarBichon of Tenerife. During the 1500's these small dogs were carried by Spanish ships which transported traders and possibly also pirates. They sailed south and turned east to the Islands of Mauritius and Reunion. By the late 1600's through to the early 1700's, pirates ruled the eastern coast of Madagascar. But by the 1700's one of Madagascar's ethnic tribal groups, established the first kingdom which extended from Tulear to the north. Later the trade was in African slaves in Tulear, a city on the west coast of Madagascar, which gave these dogs their name 'Coton de Tulear.' Here the dogs' cotton-like coats attracted the attention of the native Malagasy tribes where they were exchanged as gifts to the tribe elders and given the name 'the 'Royal Dog of Madagascar'. 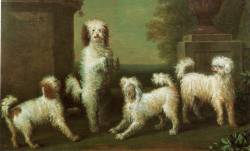 But during the 1800's the French took control of Madagascar and so many of these 'cotton coated' BarBichon type dogs were taken back to France that they are became rare in Madagascar. As Malagasy breeders had no pedigrees, exports were given sufficient documentation to prove they were 'pure bred' and exported. As Madagascar is such a poor country, with the price of a puppy around three years wages for the average Malagasy, these exports almost completely depleted the supply of 'pure bred' Coton de Tulear from the Island of Madagascar. 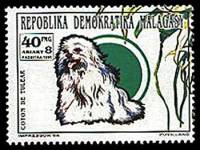 Because he was the 'Royal Dog of Madagascar', the President of the Canine Society of Madagascar wished to preserve him. So in 1970, he submitted a request to the FCI for pure breed recognition of the 'Coton de Tulear', together with a proposed Breed Standard. 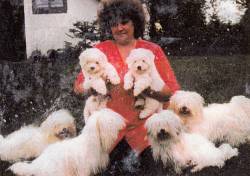 By this time the Coton had captured the imagination of the Europeans. From the original Madagascan imports, the French developed the Coton into the breed we know today. In 1987 there was a revisions to the original Madagascan Breed Standard with more alterations in 1995 and 1999, the latter being in use by the FCI today. The family group on the left is from the founding Belgium 'of Woodland Cottage' kennel of Micky Ceriez was taken in 1998. The Coton was recognized by the AKC in 2014, and first brought into Australia in December 2015[3].