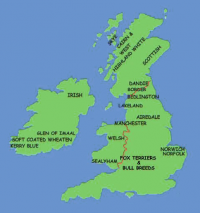 The name 'Terrier' is derived from the Latin word 'Terra' meaning earth. By the early 1800's when the various different terrier types began to emerge, there were no formal registration records. Huntsmen and farmers did not care what the terrier looked like as long as it hunted the required animals that lived beneath the ground. Any dog that could do this was mated to another adept in that same task. So we have emergence of the various breeds of Terriers we know today.

Our Terrier breeds today were originally developed by peasants or working-class people living in the localized areas of the British Isles roughly depicted by the accompanying map. These people rarely travelled outside their local region. So many terrier breeds still bear the name of that region of the British Isles where they first developed. For this reason, we shall consider Terriers according to those Regions.