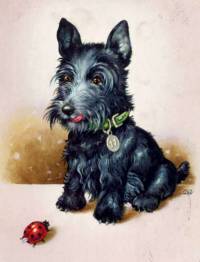 The historic similarity in construction of these two breeds is why they are considered here together. Bred to work underground, their modern long, low construction reflects the type of work these terriers were originally expected to perform. Today, as two separate pure breeds, this gives an alternative approach to understanding how modern exaggerations now typify both breeds.

History of the Skye and Scottish Terrier

The modern Scottish and Skye Terriers are very different to their working ancestors. In the first English Stud book, name the 'Scotch Terrier' encompassed both the Skye and the Scottish Terrier. In 1879, they split into two different breeds when their respective Breed Standards were written[1].

Here we have examples of a Skye Terrier and a Scottish Terrier depicted just prior to the official separation taking place. The obvious difference was the coat length and texture. In England, the Skye Terrier's coat was initially glamorized when Queen Victoria took a fancy to them. Although his coat has become exaggerated as he developed into a show dog, the length of body initially sought after has been retained.

The original purpose of this body length was to give the dog the physical strength to crawl through the badger setts to find them within the rocky surrounds of the Isle of Skye and along jagged coastline of the western part of Scotland. The softer coat allowed the dog to slither through these narrow tunnels. 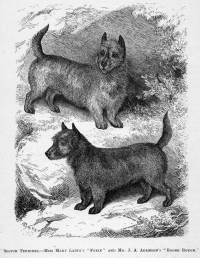 The Scottish Terrier on the other hand was developed to work in the softer earths of the hedgerows of Aberdeen on the eastern side Scotland. As this work required great power in small compass, a short very strong body was sought.

The harsh double coat helped protect it from any adversaries he may encounter, while the undercoat protected him from the cold. Then, like the development of modern Fox Terrier, over the next century and a half, the coat and general conformation was gradually modernized as he developed into the modern Scottish Terrier we know today.

The Legend of Greyfriar's Bobby 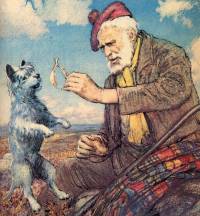 The legend of Greyfriar's Bobby dates back to 1858 when a penniless Scotman, 'Auld Jock' became well known in Edinburgh. Some sources believe he was a shepherd whilst others believe he was a policeman. But there seems no argument that 'Auld Jock' died in this city. His little terrier 'Bobby' slept on Auld Jock's grave for fourteen years, with nobody or nothing persuading him to leave[2]. This legend has been perpetuated ever since. 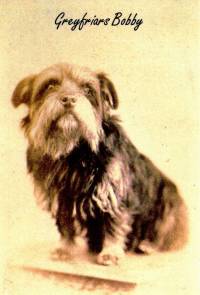 Several stories and films have been set around this fable. Certainly this little dog was made a "Freeman of the City" and wore a collar given to him inscribed: "Greyfriars Bobby. From Lord Provost, 1867. Licensed". It is also believed Greyfriars Bobby became so famous that Queen Victoria was inspired to acquire a Skye Terrier.

Today Bobby's statue stands outside a Hotel named after him in Edinburgh. Firstly he had an unmarked grave in the kirkyard and later the statue was erected at the entrance to this famous graveyard. The statue and the only existing portrait of him that exist depict him as an early type Skye Terrier.

History of the Scottish and Skye Terriers in Australia 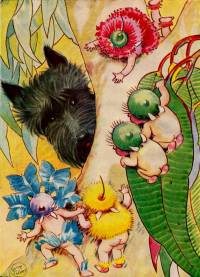 The Skye Terrier was first imported into Melbourne in 1880 with 29 Skye (Prick-Eared) and three Skyes (Drop-Eared) arriving here by 1911[3]. But they seem to have died out until 1967. Then they quickly left their mark across Australia with the late Maureen Cartilage making a significant contribution under the 'Santlin' prefix[4].

The first 'Scotch' (known today as 'Scottish') Terrier was imported in 1889. Named 'Werfa', owned by R.C.Thorn of Victoria, she is given the credit of establishing the Scottish Terrier in Australia, breeding under the 'Hensby' prefix. Scotties have been in existence here ever since with 188 being imported across Australia during the next 100 years[4].

May Gibbs became famous as one of Australia's best known children's story writers and illustrators. Her iconic gumnut characters, 'Snugglepot' and 'Cuddlepie' drawn here peering down on one of her beloved Scotties, cemented the Scotty into the hearts and minds of many Australian children who grew up during the Second World War years and beyond.

[5] J.H.Walsh, under the name 'Stonehenge', 'The Dogs of the British Islands' (Fifth Edition) Published by 'The Field' Office, 346 Strand, W.C.London 1886. Book lll, 'Terriers (Other than Fox and Toy)', Chapter l, Special Breeds of Rough Terriers. The Hard-Haired Scotch Terrier Page 233