Scenting in Conservation and Sport 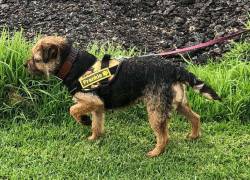 The role of Terriers of the Border Region of Britain grew out of necessity. From the 1500's, it was essential to develop terriers which would hunt all types of vermin that interfered with farming livestock and poultry. In Australia, Border Terriers are using their amazing scenting abilities in a vital conservation project as well as being popular in the activity of Scenting as a Sport. 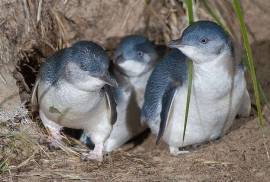 Using a Border Terrier, an important conservation project is now under way on Victoria's Phillip Island. Home to the world's the largest colony of Little Penguins, these wee birds are the stars of a wonderful spectacle every evening at sunset. With their bellies full of fish, these wee birds waddle from the sea over the beach to their burrows nestled in the sand dunes. Visitors can view these quaint Little Penguins from stands and elevated board walks. Dozens march across the beach as they return home. During the breeding season cute baby penguins can also be seen and heard, awaiting the return of their parents. 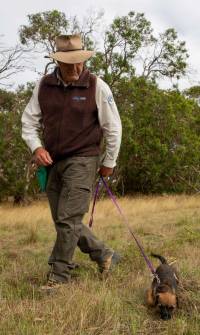 Although these Little Penguins are somewhat protected by being located on an island, together with several other indigenous species, they are particularly vulnerable to predators. The last physical evidence of foxes on Phillip Island was detected in August 2015, with the island fox-free two years later. But today, feral cats are the huge problem with 150 being captured last year.

To this end, they are using a pure bred Border Terrier, a breed that has been successfully used in other Australian Conservation Programmes. Pictured is a youngster, 'Marbee', commencing her training. With her amazing sense of smell and an experienced trainer, 'Marbee' is learning to locate feral cats' droppings and indicate her find by lying down. This makes it easier for different handlers to recognise her communication. 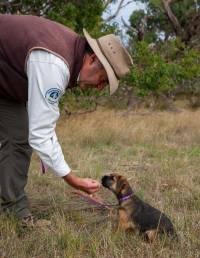 After an area where a feral cat lives has been located, a trap is set up so a Ranger from Phillip Island Nature Park can capture it alive so the authorities can deal with it.

Once Phillip Island is free of pest animals, hopefully there will be a further increase in other indigenous species which threaten these amazing Little Penguins. Isn't it wonderful to witness a Border Terrier chosen to be adapted to do the original job it was bred to do, in the modern role of conservation. 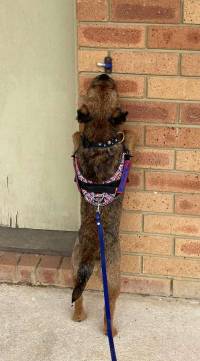 Scenting as a Sport

The sport of scenting consists of a series of detection tests of increasing difficulty where the dog searches for and identifies a target odour, and communicates his find to his handler. Training a dog to locate a specific scent can be developed using cotton buds or swabs scented with an essential oil like birch, aniseed or cloves. 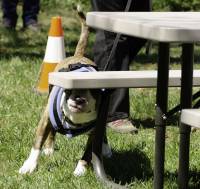 What is unique about Scenting as a Sport is the method the dog communicates his 'find' to his handler is not specified by rules. Other Sports' Rules are filled with copious detail, with which no independently minded terrier could be expected to comply! But in the majority of scenting sports, the dog chooses how he tells his handler that he has found the scent. It is then up to the handler to communicate to the judge that the dog has found the target odour.

For example the Bull Terrier on the left has found the scent underneath the table from ground level. After the owner has communicated this 'find' to the judge, the dog gains a pass. 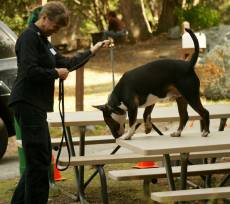 Bull Terrier Finding Scent underneath Table from Above

However, using his initiative, the Bull Terrier on the right has found the scent by jumping up on top of the table. He then indicates to his owner he has found the target odour beneath the table top. After the owner communicates his 'find' to the judge, this dog also gains a pass!

In competition, once the target odour is hidden, the dog and handler are given a time limit depending on the level, search location and skills to locate it. Success in various scenting competitions are conducted in a variety of situations with increasing difficulty, means the dog can gain Scent Dog titles. 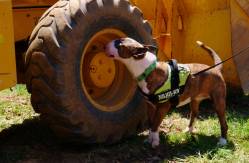 Other search exercises require finding a scent hidden in one of several cardboard boxes, inside or outside buildings, or hidden on the outside of vehicles like on tyres of cars, tractors or trucks.

As well as being great fun, it is easy to imagine how, with this training, scenting dogs can be useful in modern society. Another example is in medical science where dogs have been known to reliably detect particular scents, like cancerous melanomas on people's skins! Conservation projects like the one described above, is yet another example.

Isn't it amazing that our pure breed dogs' jobs can be adapted to assist mankind in modern society.

Thank you to Sue Mewse (Australia) and Chris Mason (USA) and several others for supplying the information and photos on Scenting.

Thank you also to the Phillip Island Nature Parks, Cowes Victoria for providing the material including the information and photos for the story on Conservation.