Review of the Film "Oddball"

The Warnambool project which used Maremma's for protecting penguins was groundbreaking in the world. In 2010, Jane went to visit the project group in Warnambool to research the project. This research resulted in the highly regarded article "Big Dogs Save Little Penguins". When the film 'Oddball' was in its early stages, Jane was one of many experts the film producers interviewed. In 2015, Jane reviewed of the film which is reprinted here.

Since I researched and wrote 'Big Dogs Save Little Penguins'[1] five years ago, the success of this innovative scheme inspired the movie "Oddball". The film fictionalized the revolutionary project of putting Maremma Sheepdogs onto Middle Island to protect the dwindling Little Penguin and other seabird populations.

This ground-breaking programme, a clear example of our dogs doing the job they were bred for, could have been such a positive for pure breeds. Instead, this film failed to properly address how and why this revolutionary program was such a success. This was disappointing despite some absolutely mesmerizing moments.

Much of the film is set on the tiny, two hectare Middle Island which used to be home to a large colony of seabirds including Little Penguins. As the land close by was developed, introduced species such as foxes as well as people who did not respect the Sanctuary, played havoc with not only the penguin population, but also that of the other sea birds. This prompted the trialling of a project involving the use of the independently-minded Livestock Guardian Dog, the Maremma.

The Maremma Sheepdog, the breed that is the focus of this film, has been selectively bred in Italy for around 2,000 years to instinctively act without human direction. From a very young age, these dogs bond with and so protect their 'family'. Sometimes this 'Family' is chickens, flocks of sheep and goats etc which the dogs protect from marauding predators like wolves and other wild animals. For the last few decades, Australian free range chicken farmers have been using the Maremma to protect their domesticated birds from foxes, other introduced predators and irresponsible people. Trials are also now underway to investigate using these dogs to guard some of our other endangered native species.

Disappointingly the film gave the impression that a grown rogue dog can suddenly become bonded with an injured penguin. In reality this never happens. Instead, farmers bring puppies up with baby chickens to ensure bonding happens. 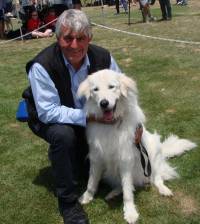 Despite the movie not emphasizing this, it does have plenty of positives. Anyone who appreciates dog training could not help but be completely captivated with the shots of 'Kai' the Maremma who plays the starring role. He was trained by Luke Hura, known to many dog people as a former obedience trialler. The mesmerizing shots of 'Kai' with the penguins are unbelievable. Also making the movie using 'real' penguins rather than animation made these parts of the film look totally authentic. With a live fox thrown into the mix the success of the programme in real life as well as in the film, becomes obvious.

The initial concept of putting Maremma on the Island came from a local chicken farmer 'Swampy' Marsh. Shane Jacobson's portrayal of 'Swampy' was wonderful and totally believable as was that of his supposed nine-year-old grand-daughter 'Olivia' played by Coco Jack Gillies. The photography, especially the aerial scenic shots were spectacular and these, cleverly cut into the close-up 'studio' shots worked really well. As did the passion for penguins played by Olivia, her grandfather 'Swampy' and her single mother, a Council Ranger.

But for a movie based on fact, it had an unbelievably bad ending. The concept of the fictitious romance between the mother and a tourism promoter who decided to build a whale observation centre and shop on the tiny island did not work. Nor did the 'goodies' versus 'baddies' drama which followed. Instead, surely revealing the trials and tribulations of implementing the initial scheme could have been the basis for an ending with comedy. Shane Jacobson would have looked hilarious in scenes focused around trying to convince politicians to change their minds about putting dogs into National Parks instead of banning them. This would have been fun and given the ending the authenticity needed to make this movie stand out from the myriad of other family films.

But overall the film is one all dog lovers should enjoy. It definitely has its heartwarming moments. The scenes with 'Kai' and the penguins brought tears to my eyes. I am also very pleased that the story of the successful use of Maremma Sheepdogs to protect Australia's Little Penguins from introduced species, has been publicized by the making of this movie. Despite its shortcomings, I am sure it will be successful.