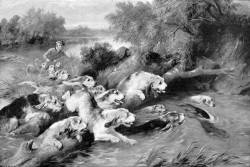 In the 1800's the streams around Yorkshire were plagued with vermin such as water rats and otters which polluted the water. These usually co-habitated burrows, living and breeding in dens with escape holes often beneath the surface of the water. So, huntsmen required a terrier that filled the dual role of having the instinct of going to ground as well as being capable of swimming. 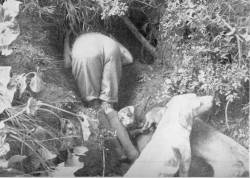 Sometimes huntsmen also dug quarry out of their holes. Note him working with the Terrier as well as the hounds. The terrier was required to enter otter's den and bolt any vermin, which usually included water rats into the stream. Then with the assistance of Otterhounds, the vermin was driven to swim towards the huntsmen who would be positioned wading at least knee deep in water within the rivers or streams, with nets. The otter, usually accompanied by water rats was eventually caught in the huntsman's nets.

Called an otter drag, this often went on for hours. Not only did otter drags assist in keeping the streams hygienic, the huntsmen of Yorkshire enjoyed the sheer sport of working their dogs in this two-fold role. During the latter part of the 1800's otter drags which had first developed as a necessity, later became a sport. 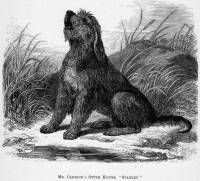 The huntsmen of Yorkshire would have obviously used the two types of dogs that existed in the North of England at that time. The first was a Terrier of that Region which was already proven adept for entering dens and bolting its quarry. The second was an Otterhound, a hairy powerful hound with large ears and an oily water repellent coat somewhat like the dog on the right that was often used for hunting otters in the streams at that time. From these two breeds, the Airedale Terrier has its beginnings.