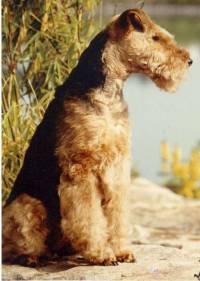 History of the Manchester Terrier 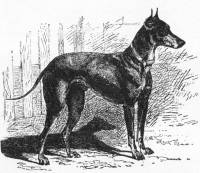 The Manchester Terrier developed in the English city of Manchester which is described as the world's first industrial city. From the early 1800's it grew at an enormous rate because its damp climate made it suitable for cotton manufacture. It also had coal for a nearby power source, and the sea port of Liverpool accessible firstly by a shipping canal followed by one of the earliest railways. By 1844 Manchester had estimated 400,000 inhabitants. But with no sewerage system in place, the squalor these people lived in is unimaginable[1]. So a tough, game smooth coated ratting dog became one of life's necessities. 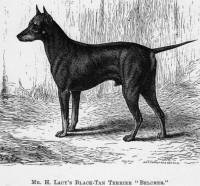 Additionally, demonstrating prowess amid the squalor, it was common for sportsmen of the day to use the Manchester Terrier for ratting in a rat pit. This involved exchanges of money for not only the dogs, but also as bets and for seats to watch the action. As the dogs became more admired, ladies of fashion adopted the smaller Black and Tan Terriers. So the Black and Tan Terrier became split into two weight varieties, the Manchester Terrier and English Toy Terrier (Black and Tan).

As rat pitting became illegal, the dog show scene was evolving. Named 'Manchester' after 1874, 'Belcher' (pictured) was considered to be the most perfect specimen of the breed in his time. This was when breeders concentrated on stabilizing colour[8]. In 1879 Stonehenge, a prominent English writer of that time wrote

'First the black must be jet without admixture with the tan or a single white hair; secondly the tan must be rich mahogany, defined distinctly by a marked and clear line where it meets the black'.[2] 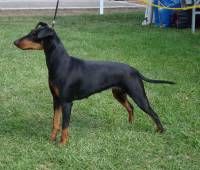 To this day the unique markings of both varieties are this black and tan terrier's most defining characteristic. In other words, its basic construction has not altered in two centuries. Devotees over this time have selected for precise black and tan colour markings rather than exaggeration of either head or other body features. So examination of the Manchester is like stepping back in time to appreciate how far the show ring has altered the construction of some of the other terriers we see today.

History of Manchester Terriers in Australia 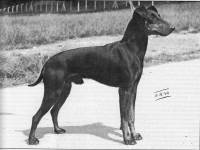 Smooth Coated Terriers (Black and Tan) over 7 pounds were popular here from our first dog show in 1864 with 23 exhibited[5]. After that 17 more were recorded in Tyzack's Annual, Australia's first Stud Book as being imported, with the show records of another 14 appearing in the Stud Section[6]. 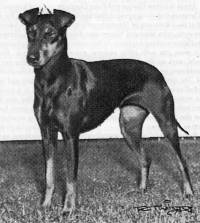 They then seemed to die out until the early 1970's when Saintrelec Kennels in Wodonga, Victoria revived them importing Ch Coombelane Furiso, Ch Clampitt Gwinny and Ch Icecenian Icarus, all from UK. They sold Manchesters across Australia. Then, in 1987 the breed was given a further boost by Jenny Hill who imported Eng Ch Keyline Drummer Boy (UK). He was an excellent example of the breed, and Jenny enthusiastically campaigned him. The bitch, Ch Keyline Guinevere (Imp UK) followed from the same famous English Kennel, reinforcing the quality of Manchester's right across Australia[7]. 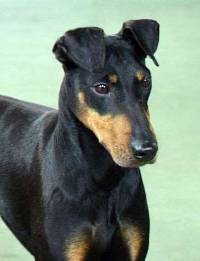 The Manchester Terrier has remained a keen alert sporting dog despite his colour being so ruthlessly selected for over two centuries.  It has a wedge shaped head, with a long flat skull, a normal scissors bite and tight lips. Because historically the ears were cut or cropped, today unlike its Toy counterpart its button ears are small and carried well above the line of the skull. In North American naturally pricked ears are also allowable. 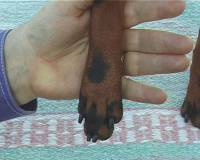 With the basic construction of the long legged terriers, he has a fairly short body, deep chest and straight front legs with small semi-hare feet. He has a slightly arched loin with the carriage of the tail continuing the line of the arch and not carried over the back. However, it is a short tail and, typical of a terrier it should be thick where it joins the body. The Manchester Terrier should stand 15 to 16 inches tall.

The Colour of the Manchester Terrier 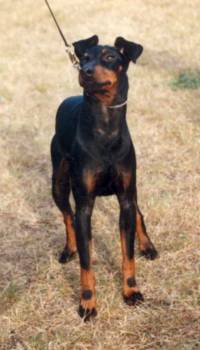 As his colour description dominates the breed standards of both the Manchester Terrier and the English Toy Terrier Black and Tan (Toy Manchester) counterpart, it is also elaborated upon here in some detail.

The dog must jet black (ebony) and rich mahogany tan (likened to a rich chestnut). White hairs forming a patch anywhere is totally undesirable. The colours must not run or blend into each other, but must meet abruptly, forming clear and well defined lines of colour division.

The History of the Welsh Terrier 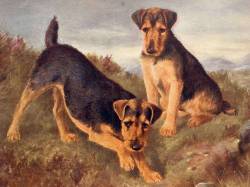 It appears that the Welsh Terrier is not uniquely Welsh in origin at all! In 1886, its first entry in the English Stud Books was under the name "Welsh or Old English wire-haired black and tan terriers"! Common as far south as Devon, with the largest numbers found at Shows in Liverpool and Birmingham it was described as

"as grand-looking a lot of working terriers as man need desire to see".

Around this time, there was evidence to prove that this identical dog of comparatively pure blood had long flourished in the north of England, and in some districts was still to be found unaltered.

In England, at first the same type of dog could be dual registered with the Kennel Club as a 'Welsh Terrier' as well as an 'Old English hard-haired black and Tan Terrier'. But as the English fanciers failed to establish a club, in 1888 a group of Welshmen persuaded the Kennel Club to drop the English name. So entries in the English Stud Books have been under the name Welsh Terrier ever since![3] Also in 1888 it was taken to the United States where it was recognised by the American Kennel Club also as the Welsh Terrier.

History of the Welsh Terrier in Australia 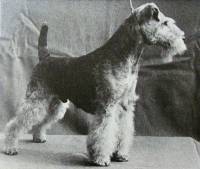 The Welsh Terrier was introduced until 1966 when Strongfort Kennels introduced the dog pictured on the left, Ch Felstead Pioneer (Imp UK) from one of England's most famous Welsh Terrier Kennels. This dog was later joined by a female and laid the foundation for others to follow. A small band of enthusiasts have kept the breed alive ever since, with Welsh Terriers regularly appearing in our Australian show rings and gaining high awards. 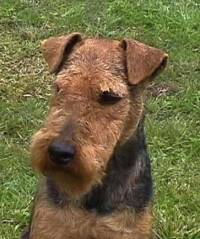 Unlike the Manchester Terrier, the Welsh Terrier has altered in conformation and today outwardly appears like a black and tan version of a Fox Terrier (Wire) or Lakeland Terrier with construction like the long legged terriers. This is possibly because Breed Standard requires the Welsh Terrier to be smart and workmanlike, yet retain his game and fearless temperament. 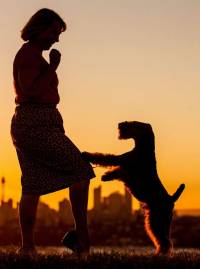 He has a flat skull of moderate thickness, and around the same length as his foreface. He has a slight stop and deep and powerful jaws housing a normal scissors bite. Like a typical terrier he has small eyes and ears set on fairly high and carried close to the cheeks.

He has a short back, his forelegs having ample bone with upright pasterns and small round cat-like feet. He has strong hindquarters with good angulation to match his front. This enables him to move with fore and hind legs carried straight forward, the elbows working free of the sides to facilitate the specialized terrier front of a working terrier. He has a hard, wiry broken coat with undercoat. He is always black and tan or grizzle and tan, free from black penciling on the toes or below the hocks. He weighs around 20-21 pounds and should not exceed 15.5 inches.

[8] J.H.Walsh, under the name 'Stonehenge', 'The Dogs of the British Islands' (Fifth Edition) Published by 'The Field' Office, 346 Strand, W.C.London 1886. Book ll, 'Terriers (Other than Fox or Toy)', Chapter ll, Smooth Terriers (Other than Toys). The Black and Tan Terrier by Hugh Dalziel Page 261